Goldilocks At The Table: Abq Jew has had the pleasure of reviewing new and old Passover Haggadot before (see A Haggadah Revue and Journey of Questions and Faith).

But he has never looked at a new Pesach Haggadah with as much eager-to-pounce skepticism as he did this year's Sixty-Minute Seder, by Nellie and Cass Foster. 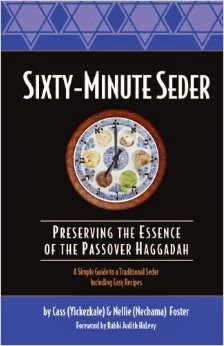 After all, the Haggadah itself proclaims


And the more one tells of the departure from Egypt,
the more is he to be praised.


Sixty-Minute Seder™: Preserving the Essence of the Passover Haggadah is not about taking the traditional Seder and turning it into something so modern the reader loses all sense of tradition.

This conservative Jewish couple condensed the Seder – which normally runs from two to five hours – into one hour.

Although it is abridged, everyone can use it to honor and celebrate the annual Passover Seder as intended. Readers will welcome the instructions on how to keep chametz (unleavened products forbidden during Pesach) for use following the eight days of Passover, as well as Nellie’s delicious Seder meal recipes.

So why cut the Pesach Seder ceremony short at sixty arbitrary minutes?

First of all - sixty minutes is not arbitrary. Sixty minutes, we all know, is the exact length of one good TV show. More and more, sixty minutes defines the outer limit of attention span for our youngest and increasingly for our oldest, too. Sixty minutes, it turns out, is a goodly amount of time. 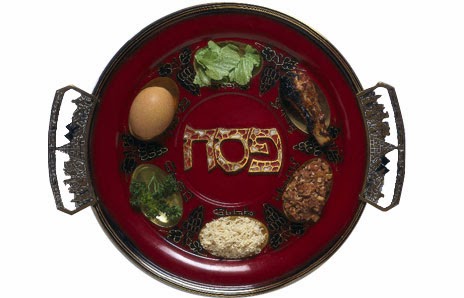 So the next question is, of course


Which parts of the Pesach Seder do we drop?

But wait! Before we answer that, let's look at the parts of the Pesach Seder that are still in the Sixty-Minute Seder:

Alright ... so which parts of the Pesach Seder does the Sixty Minute Seder drop?

The Sixty-Minute Seder drops all the "Talmudic" passages that Abq Jew finds so enchanting but that seem to put everyone else to sleep. And you know exactly which paragraphs they are!

One may think that [the discussion of the exodus] must be from the first of the month. The Torah therefore says, `On that day.' ....

Go forth and learn what Laban the Aramean wanted to do to our father Jacob ....

Rabbi Yosi the Gallilean said: How do you know that the Egyptians were stricken by ten plagues in Egypt, and then were struck by fifty plagues at the sea? .... 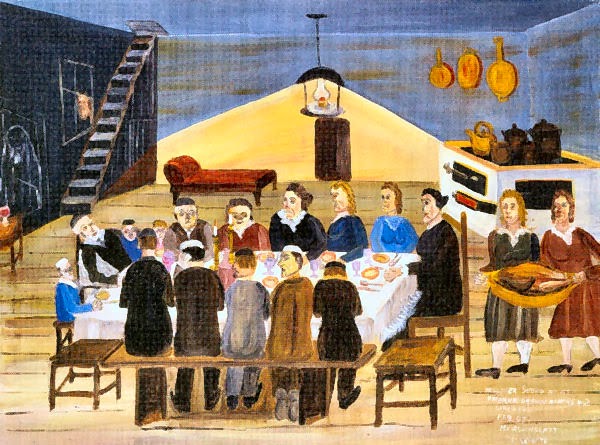 Two more things that Abq Jew thinks you should consider before racing to Abq Jew's Amazon Store:
The Sixty-Minute Seder is pretty much what Abq Jew likes to think he would have done if he had only thought of it. So, as Butch asked Sundance,


Who are those guys?

The creative team, says the Sixty-Minute Seder website, starts with the co authors.


Cass Foster, Professor Emeritus of Theatre, continues to be actively involved in the theatre as an educator, director and playwright. In the early 1990s, he wrote a series of Sixty-Minute Shakespeare plays, so the standing joke at his long, drawn-out Passover Seders was: “How about a sixty-minute Seder this year?” 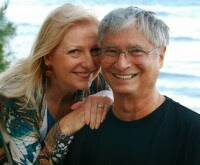 He admits, “Over the years I’ve put many a Seder guest to sleep, and as I got older, I found I was even putting myself to sleep. So I figured an hour-long version might not be a bad idea.” 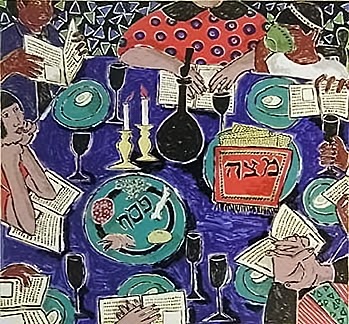 Nellie Foster spent her entire adult life in the medical field, from managing and creating medical labs to working as an educator in the field of infertility, to serving as the director of clinical operations in a naturopathic college in Tempe, Arizona.

When Cass approached her with the idea of a condensed Seder, she was immediately onboard. “What a great opportunity to be able to help so many properly prepare for Passover and the Seder,” she says.

Her experience in preparing Seder meals every year for as many as 50 guests resulted in her delicious recipe contributions for both the Seder meal and the week of Passover. When not directing her energies in Passover-related areas, she keeps busy as an actor and with her natural allergy-relief practice. The couple lives on the Garden Isle of Kauai, Hawaii.

OK ... now you can race to Abq Jew's Amazon Store.

Sixty-Minute Seder.
Not too short. Not too long.
Just right.