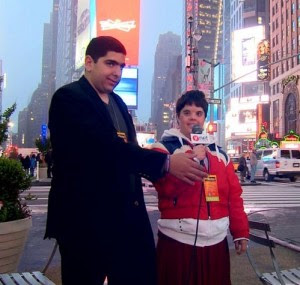 Special Interview follows 27-year-old Efrat Dotan, who has Down’s syndrome, and 20-year-old Matanel Bitton, who has developmental disabilities. Efrat and Matanel spend their days at SHALVA-The Association for Mentally & Physically Challenged Children in Israel where they are taught life skills that enable them to reach their maximum potential.

As trained reporters, they have interviewed many well-known personalities including Prime Minister Benjamin Netanyahu and President Shimon Peres, but their dream is to interview President Barack Obama.

The film shares their journey from Jerusalem to New York to Washington DC, while offering a peek into their unique world. Special Interview both informs and entertains, leaving us with a richer appreciation and understanding of the special needs community.

Special Interview is being screened in conjunction with the Albuquerque JCC’s exhibit "How I See the World”.  The exhibit will run through Wednesday August 14. 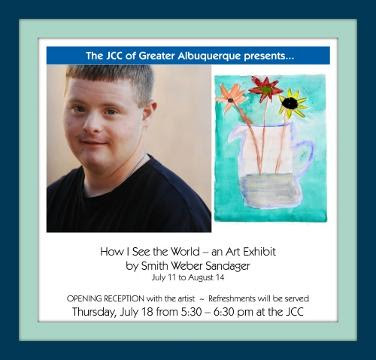 Smith has often said, “My art is how I see the world!” His exhibit will feature upbeat themes such as:  love, patriotism, Israel, natural beauty and whimsy.

The JCC and Jewish community are very significant parts of Smith’s world, where he has been embraced and encouraged by all.

The proceeds from art sales will be donated by Smith to benefit the New Mexico Holocaust and  Intolerance Museum and the Jewish Community Center’s Arts and Culture programming.