Indiegogo Campaign: The Indian Pueblo Cultural Center is currently utilizing the crowd sourcing site Indiegogo to keep "in house" the statue of Po'Pay that today stands in the IPCC's entrance hall. 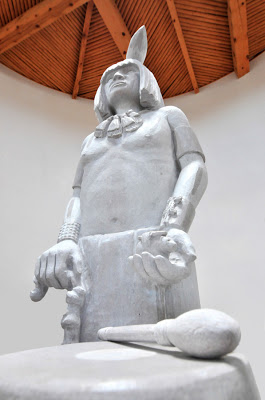 Abq Jew wrote about this impressive statue in March (see Welcome to "J" University). Who was Popé? Abq Jew hears you ask. The IPCC website tells us:


Popé was born around 1630 in Ohkay Owingeh [formerly known as San Juan Pueblo], in what is now the state of New Mexico; his given name was Popein (pronounced bó -bein), which means "ripe squash" in the Tewa language.

Pueblo people were forced to provide labor, food and other items to support the growing Spanish communities. The Spaniards also pressured the Pueblo People to convert from Pueblo religion and way of life…to adopt Christianity - those Pueblo people found practicing their traditional Pueblo religion were tortured and in some instances, executed.

In 1675, Popé and 46 other Pueblo leaders were convicted of “sorcery” and he was among those who were flogged, while others were executed. In 1680, Popé organized the Pueblo Revolt against the Spanish.  It has been said that this was the first successful revolution against an oppressor on North American soil.

On its Indigogo page, the IPCC writes about the sculpture:


This Popé (pronounced Po-Pay) sculpture, by Clifford Fragua of Jemez Pueblo, is currently on loan to us by the artist. We are raising funds to acquire Popé as part of our permanent collection ....

By keeping the Popé sculpture "home" at the Indian Pueblo Cultural Center, we will contribute to the education of thousands of visitors annually and more importantly, we will be sharing this important historical event and individual with a younger generation of Pueblo youth.

The Popé sculpture stands as a reminder of the important role he and others played in preserving Pueblo culture, religion, traditional lands, language and a way of life.

It is our intent to share this story and connect the path that has paved the road for our Pueblo people today as we strive to maintain our way of life and strengthen our deeply rooted traditions.

Abq Jew believes that the Albuquerque Jewish community is very aware of both the importance and the difficulty of preserving our own cultural heritage.

And Abq Jew believes that we can play a vital role in helping the IPCC to continue its work, preserving and presenting the cultural heritage of the Indian pueblos.


This Popé sculpture is valued at $125,000.and artist Clifford Fragua is committed to the Indian Pueblo Cultural Center and our mission, so he has reduced purchase price to $70,000.

[The IPCC's] goal is to ensure that Popé never leaves the Indian Pueblo Cultural Center and is here for future generations.

Here is the IPCC video about Po'Pay and this project.
The campaign is scheduled to end on August 10.