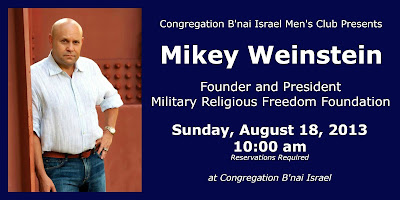 Mikey Weinstein is the undisputed leader of the national movement to restore the obliterated wall separating church and state in the most technologically lethal organization ever created by humankind: the United States armed forces.

He is described by Harper’s magazine as “the constitutional conscience of the U.S. military, a man determined to force accountability.” 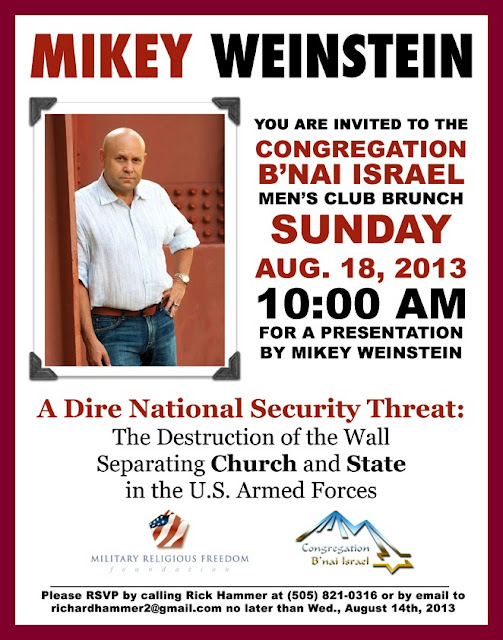 Mikey’s family has a long and distinguished U.S. military history spanning three consecutive generations of military academy graduates and over 130 years of combined active duty military service in every major combat engagement our country has been in from World War I to the current Global War on Terror.

Mikey is a 1977 Honor Graduate of the United States Air Force Academy. Mikey has been married for over 35 years to his wife, Bonnie. He is the proud parent of two sons and one daughter. His oldest son and daughter-in-law are 2004 Graduates, Mikey’s youngest son graduated in the Class of 2007, and his son-in-law is a 2010 graduate from the Air Force Academy.

Seven total members of Mikey’s family have attended the Academy. His father is a distinguished graduate of the United States Naval Academy. Mikey spent 10 years in the Air force as a “JAG” or military attorney serving as both a Federal prosecutor and criminal defense attorney.

Mikey has appeared innumerable times on all of the major cable and terrestrial TV news networks and is a frequent guest on national radio networks as well.

His constitutional activism has been covered and profiled extensively in the print media, including the Associated Press, The New York Times, the Washington Post, the L.A. Times, the Denver Post, The Guardian, and many other national and international newspapers and periodicals, including Time magazine.

Mikey was named one of the 50 most influential Jews in America by the Forward, one of the nation's preeminent Jewish publications. He also has received a nomination for the JFK's Profile in Courage Award and received the Buzzflash Wings of Justice Award. In addition Mikey was honored by a distinguished civil rights organization, Jews for Racial and Economic Justice, with the Rabbi Marshall T. Meyer Risk-Taker Award for those who have taken risks in the pursuit of justice.

Reviled by the radical fundamentalist Christian far-right, Mikey has been given many names by his enemies including "Satan", "Satan's lawyer", "the Antichrist", "That Godless, Secular Leftist", "Antagonizer of All Christians", "Most Dangerous Man in America" and "Field General of the Godless Armies of Satan".

On November 7, 2011, Americans United for the Separation of Church and State presented Mikey Weinstein with AU's first ever Person of the Year Award. In their press release, AU describes MRFF as "the leading voice protecting church-state separation in the military."

On November 18, 2012, for the fourth consecutive year, the Military Religious Freedom Foundation was officially nominated again for the 2013 Nobel Peace Prize (its fifth total nomination).

In December 2012, Defense News named Mikey one of the 100 Most Influential People in U.S. Defense.

Mikey's latest book, No Snowflake in an Avalanche: The Military Religious Freedom Foundation, its Battle to Defend the Constitution, and One Family's Courageous War Against Religious Extremism in High Places was released in January 2012. It details MRFF's prominent case studies, struggles, and the violent reactions to MRFF advocacy.


Mr Weinstein will be signing
copies of his books after his speech.
Books will be available for purchase at the event.
Please RSVP by calling Rick Hammer at (505) 821-0316
or by email to richardhammer2@gmail.com no later
than Wednesday August 14th.