Vanessa Paloma:  You do remember Vanessa Paloma, don't you? Abq Jew mentioned her just a few days ago in A Hidden Light, about the award-winning Gaon Books:


Ron Duncan Hart and Gloria Abella Ballen - aka Gaon Books - are companions in the road of life. Ron writes, and Gloria is the visual artist. Their daughter, international musician and Fulbright scholar Vanessa Paloma, adds incredible richness to their lives and the lives of everyone around her.

Here is more about Vanessa, from the Vanessa Paloma Facebook page: 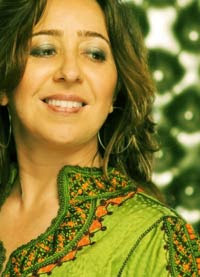 Vanessa Paloma, Senior Fulbright Scholar and Artist to Morocco has been uncovering the metaphoric meaning of these ancient texts that are embedded in the collective memory of the Jewish community of Northern Morocco.

These Jews, a blend of Jewish, Spanish, and Moroccan, carry complex identities of being Jews in a Muslim country as well as the direct descendants of the Spanish Jews who left Al-Andalus at the time of the expulsion and later inquisition.

Their songs have veiled themes that drive the importance of continuity and preservation of Jewish identity by maintaining close ties to religion, family, tradition and sexual purity.

And here, for your Shabbat Thanksgiving enjoyment, is Al pasar por Casablanca - Passing Through Casablanca.

Also known as "Don Bueso" or "Una tarde de verano", Al Pasar por Casablanca is a typical Romance with Reconquista concerns. The Romance of Don Bueso's story (with different melodies than this one, which is from Northern Morocco) exists throughout the Mediterranean with titles such as "De las altas mares" and "Lavava y suspirava."

The video was shot in the American Southwest, to commemorate the large population of Sephardim who fled in this direction after 1492. Forced conversions and Inquisitional persecution - the metaphor of redeemed captive in this Romance parallels the process of Crypto-Jewish return.