A Day To Remember: This Sunday, the Albuquerque Jewish community remembers our war veterans, our Holocaust survivors, and all their loved ones.

CA's special guest speaker is Jim Stanek, founder of Paws and Stripes™.
This program is FREE and open to all!  Advanced registration is not required.

Jim Stanek was sent home from his third tour in Iraq for injuries he received on deployment. After nine months in treatment at Brook Army Medical Center in San Antonio, TX, Jim discovered that the most comfort and relief he found was in the presence of therapy dogs.

In May of 2010, Jim and his wife tried to obtain a trainer for their rescue dog, Sarge. They soon found out how difficult and expensive this process is. After being either turned down or unable to pay for service dogs from multiple organizations, the two looked at one another and agreed to start their own organization for veterans.

Incorporated in June of 2010, Paws and Stripes™ was born. Now, he has trained his own service dog, a process that he has found rewarding, relaxing, and more effective than any pill or therapy session. 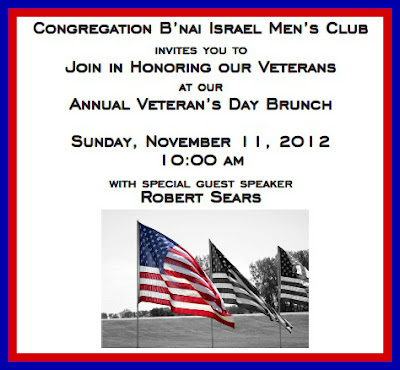 Sears’ final assignment was as Drill Instructor at Marine Corps Training and Education command.  He did combat tours in Desert Shield, Storm as well as Restore Hope in Somalia. After retirement, Sears became a Sheriff’s Deputy and is currently assigned to the SWAT team. 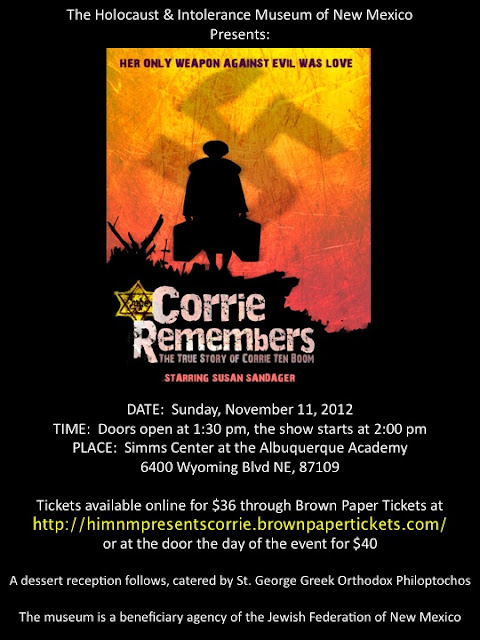 Corrie Remembers is a powerful one-woman dramatization by Susan Sandager, who portrays Corrie ten Boom, a Christian woman who hid Jews in her home during the Holocaust.

Tickets are available from Brown Paper Tickets or at the door. A sumptuous dessert reception follows the performance.

This museum fundraiser will serve as a remembrance of Kristallnacht (Night of Broken Glass) which occurred throughout much of Nazi Germany in 1938 on the nights of November 9 and 10. Organized bands of Nazis torched synagogues and vandalized Jewish homes, schools and businesses. Close to 100 Jews were killed. In the aftermath, 30,000 Jewish men were arrested and sent to Nazi concentration camps.

As for Abq Jew: here is a tribute to the WWII Marines who fought in the Pacific. The music is John Williams' "Hymn to the Fallen" from Saving Private Ryan.