Remembering My Father:  On November 29, 1947, the UN General Assembly passed a resolution calling for Palestine to be partitioned between Arabs and Jews. 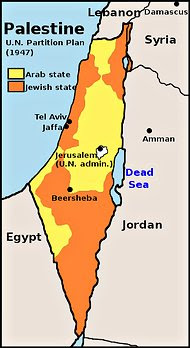 That was 65 years ago, before Abq Jew was born. Yet he remembers that day as if it were yesterday.


The United Nations Partition Plan for Palestine was a plan for the future government of Palestine. The Plan was described as a Plan of Partition with Economic Union which, after the termination of the British Mandate, would lead to the creation of independent Arab and Jewish States and the Special International Regime for the City of Jerusalem. On 29 November 1947, the General Assembly adopted a resolution recommending the adoption and implementation of the Plan as Resolution 181(II).

Let's start with the map itself. Do you notice anything missing?

So let's look at this map to the right, which shows the area of the original British Mandate.

What's missing in the 1949 map above is the entire area of Palestine that lies east of the Jordan River.

What happened to all that land? Abq Jew hears you ask. Well .... 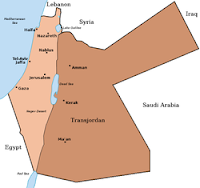 The British government decided to remove 78% of the area of the Palestine Mandate from the jurisdiction of that Mandate.

As the map to the left shows, the British created a separate Arab entity there, called Transjordan. They then gave that land to Emir (later, King) Abdullah.


How could the British do that, Abq Jew hears you ask. Well ....

Let's look at the document that (in a sense) started it all - the Balfour Declaration. Wikipedia tells us:


The Balfour Declaration (dated 2 November 1917) was a letter from the United Kingdom's Foreign Secretary Arthur James Balfour to Baron Rothschild (Walter Rothschild, 2nd Baron Rothschild), a leader of the British Jewish community, for transmission to the Zionist Federation of Great Britain and Ireland.


His Majesty's government view with favour the establishment in Palestine of a national home for the Jewish people, and will use their best endeavours to facilitate the achievement of this object, it being clearly understood that nothing shall be done which may prejudice the civil and religious rights of existing non-Jewish communities in Palestine, or the rights and political status enjoyed by Jews in any other country.

The "Balfour Declaration" was later incorporated into the Sèvres peace treaty with Turkey and the Mandate for Palestine. The original document is kept at the British Library.

2. As you can also easily see, the Balfour Declaration supports a national home for the Jewish people "in Palestine." And "in Palestine" meant exactly that, and was never intended to imply all of Palestine.

The British, for their own reasons, went with the second interpretation. There are others, of course (followers of Vladimir Jabotinsky, for example), who still hold with the first interpretation.

In any event, everyone (perhaps) recalls what happened right after the UN vote on November 29, 1947. Wikipedia (and The New York Times) reminds us:

The rest, as they say, is history. Go and learn!

My father, Richard W Yellin, of blessed memory, certainly chose an already memorable day on which to pass on  to the World to Come. Abq Jew has written on his father's yahrzeit - last year (Boogie Woogie), and the year before (My Father's Yahrzeit).

This time around, five years after his father's passing, it's the civil date (yahrzeit is still four days away) that Abq Jew recalls. November 29 also turns out to be the day in 2001 that George Harrison died, at age 58, following a battle with cancer.

But let's return to the Land of the Living. And let's start with Jane Ellen, whom Abq Jew has wanted to meet since he discovered that she teaches music at OASIS Albuquerque. 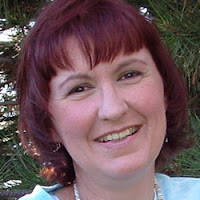 I continue to work as a composer and arranger in addition to lecturing for the Albuquerque campuses of OASIS and the Osher Lifelong Learning Foundation. 2011 marked my 25th anniversary as a published composer; in September I received my 22nd consecutive ASCAPlus Award for 2012. I am working on several commissions scheduled to premiere in 2012, as well as writing incidental music for an intergenerational play entitled The Mystery of the Cold, Wet Nose. Throughout the year I arranged several pieces for cabaret performances by tenor Jay Hill. I was the music director/arranger for the KUNM Radio Theatre production Christmas Eve at the Mermaid, broadcast Dec. 2010.

Why has Abq Jew wanted to meet Jane Ellen, Abq Jew hears you ask. The answer: to pronounce the Abq Jewish equivalent of "Madam, I'm Adam."

Jane Ellen's class today is The Wit and Wisdom of Tom Lehrer. The OASIS Albuquerque course catalog tells us:


Singer-songwriter Tom Lehrer (1928- ) gained a national following in the 1950s and 60s as a piano-playing political satirist, poking fun at politicians, academia, Cold War paranoia, organized religion, and anything else that tickled his fancy. In odd non-musical moments he found time to teach at MIT, work as a researcher in Los Alamos, NM, and he supposedly invented the "jello shot." His musical career was brief but influential and his songs continue to be quoted today.

Well, it's getting close to Christmas, also known as Xmas, but in politically correct circles referred to as "The Holidays." Along with Chanukah, Hannukkah, Khanikeh, and Kwanzaa.