Opening on Saturday November 10: A letter written in 1946 at the Lodge Resort in Cloudcroft, New Mexico will be opened at a historic public symposium after 66 years in the dark.

Surrounded by sisters, family, friends and scholars, ﬁlmmaker Melinda Hess will carefully open her father’s unopened letter on Saturday, November 10, 2012, Veteran’s Day weekend where it was penned – The Lodge Resort.

What is this all about? Abq Jew only found out about this a few days ago, but here's the scoop:


While daughter/ﬁlmmaker Hess was unpacking an old suitcase stowed inside unopened boxes a few years ago she discovered a bundle of yellowed letters. Each envelope was chronologically numbered in pencil and addressed to her grandparents in New York City. Postmarked 1946, each with the return address - “Private S. Hess, Research & Development- Sub Ofﬁce Rockets,” Fort Bliss Texas, Hess sat on her studio ﬂoor reading letter after letter.

Astonished by the voice of her 21-year-old Jewish father detailing his daily activities, Southwest food discoveries and surprising observations as his military assignment unfolded revealing over time, a top secret missile development project between the U.S. and former German rocket scientists. Leaﬁng through the pile of letters Hess noticed one envelope adorned with a beautiful cloud graphic logo with the ornate script, “The Lodge,” Cloudcroft, NM, and it was still sealed. 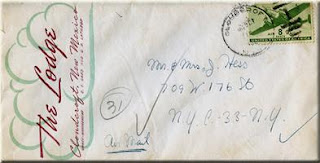 As Hess reached for a letter opener, her partner and fellow ﬁlmmaker [Patricia] Antelles stopped her abruptly, saying “one day you’ll open this on camera” and the “Letter From Cloudcroft” journey and ﬁlm was born.

So! This is all about Operation Paperclip! Here is some more background:


In the aftermath of WWII and the Holocaust, the historic collaboration between the U.S. government and German rocket scientists resulted in the establishment of the V2 rocket program at White Sands Proving Ground in Southern New Mexico.

As engineering of the V2s evolved, the missiles became the foundation for a multi-stranded legacy that included the development of the intercontinental ballistic missile and the Saturn rocket delivering Americans to the moon.

While New Mexico’s  contribution to space exploration from archeoastronomy to the Spaceport is known, few know of the complex history behind the V2 rocket, and its trajectory from the rocket slave camps in Nazi Germany, to the desert of White Sands Proving Ground, and space travel today.

Want to learn more? Abq Jew is happy to inform you that there will be a large gathering of scholars and lay professionals at The Lodge in beautiful Cloudcroft this very Shabbos.

But Abq Jew is also happy to inform you that - in case you hadn't noticed - we are especially fortunate to live in a time of great technological innovation, at the very edge of the Space-Time Continuum.

In other words - you can watch Melinda Hess perform The Opening and listen to a slew of speakers deliver The Symposium on the Web by freely and, moreover, without cost registering here on Eventbrite.

Want to learn even more? Letter From Cloudcroft will soon (we hope) become a film. And you may choose to support the film project here.


As part of an intact letter collection, the unopened 1946 letter is also the basis of the documentary film and transmedia project Letter From Cloudcroft by Hess’s filmmaker daughter Melinda and partner Patricia Antelles of Convivial Studio, in New Mexico.

Tracking incidents and leads from the letters, piecing together the complexities of history, trauma, personal narratives and collective memory, the filmmaker’s journey offers a glimpse into the challenges and rewards of personal and societal reconciliation and transformation.

But right now Letter From Coudcroft has got a website and two Facebook pages - one for the film and another for the event. And New Mexico Tourism's website wrote about The Letter here.

Abq Jew apologizes for the late notice, and recognizes that many of us may already have plans for the weekend. But this is a cool event and a very interesting project. Melinda Hess explains:


This project is not just about my father and his experiences, or my family’s honoring of him.