With The Figueroans: This Friday and Sunday, Symphonic Grandeur! will come to Albuquerque. As Abq Jew has previously stated - this may be the best classical music event in Albuquerque this year! 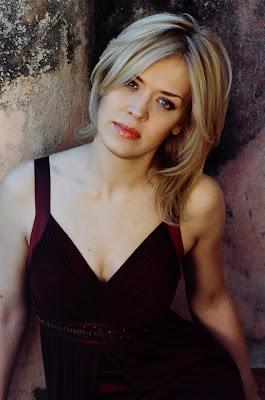 Olga Kern - winner of the 2001 Van Cliburn International Piano Competition - is perhaps the most charismatic of contemporary pianists in the world today. She will play the universally known and admired Piano Concerto No. 1 by Tchaikovsky. 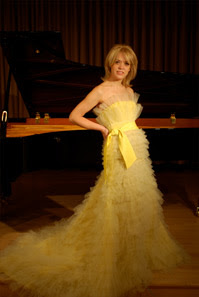 To give you an idea of the virtuosity that awaits you, Abq Jew suggests that you watch and listen as Ms Kern performs Rachmaninoff's Piano Concerto No. 3 at the University of Arizona in February 2010.

Her introduction there states


With a passion as vivid and confident as her musicianship ... [Ms Kern] won the 2001 Van Cliburn International Piano Competition, the first woman to win the prestigious honor in 30 years.

It could be in her blood; she was born into a family of musicians with ties to both Tchaikovsky and Rachmaninoff.

The Washington Post writes, "Her electricity at the keyboard is palpable it flows through her fingers and takes on fresh voltage."

If you haven't heard - or heard of - Olga Kern, Marianne Lipanovich of the San Francisco Classical Voice tells us


Although she’d been winning competitions since age 11, including the Rachmaninoff International Piano Competition at age 17, pianist Olga Kern really came to the public’s attention, at least in the U.S., at the 2001 Van Cliburn competition. She played Rachmaninov’s Piano Concerto No. 3 and became the first woman in 30 years to win the gold medal, which she shared with Stanislaw Ioudenitch. It was just the start of what she calls a wonderful career, which includes two Carnegie Hall appearances within two weeks, performances around the world, and international recognition for her technique.

Despite her name, Kern grew up in Russia, surrounded by a musical family that has ties to both Rachmaninov and Tchaikovsky. She now makes New York City her home, along with her son, when she’s not traveling to perform. ....

If you haven't heard - or heard of - Van Cliburn ... you must be younger than Abq Jew. Wikipedia tells us


Harvey Lavan "Van" Cliburn, Jr. (born July 12, 1934), is an American pianist who achieved worldwide recognition in 1958 at the age of twenty-three, when he won the first quadrennial International Tchaikovsky Piano Competition in Moscow, at the height of the Cold War.

It was his recognition in Moscow that propelled Cliburn to international fame. The first International Tchaikovsky Competition in 1958 was an event designed to demonstrate Soviet cultural superiority during the Cold War, on the heels of their technological victory with the Sputnik launch in October 1957. Cliburn's performance at the competition finale of Tchaikovsky's Piano Concerto No. 1 and Rachmaninoff's Piano Concerto No. 3 earned him a standing ovation lasting eight minutes. When it was time to announce a winner, the judges were obliged to ask permission of the Soviet leader Nikita Khrushchev to give first prize to an American. "Is he the best?" Khrushchev asked. "Then give him the prize!" Cliburn returned home to a ticker-tape parade in New York City, the only time the honor has been accorded a classical musician. His cover story in Time proclaimed him "The Texan Who Conquered Russia."

If you can't quite place the Tchaikovsky, Wikipedia provides an analysis of the piece's structure and history. Even better: Here is Van Cliburn, performing in Moscow in 1962.

Ah, yes!  And in case you didn't know about the Van Cliburn International Piano Competition, Wikipedia tells us

The Van Cliburn Competition is held every four years (the year after the United States Presidential elections; thus, the next competitions will be held in 2013, 2017 and so forth). The winners and runners-up receive substantial cash prizes, plus concert tours at world-famous venues where they perform pieces of their choice.


The Fort Worth Symphony had just finished its traditional playing of The Star-Spangled Banner when the Bass Hall crowd and the musicians began to settle in for what was going to be a concert celebrating the 50th anniversary of the Van Cliburn Competition.

What happened next was both stunning and historic.

Out onto the stage shuffled the tall, slender and familiar figure of Van Cliburn, assisted by symphony conductor and close friend Miguel Harth-Bedoya. The audience leaped to its feet to applaud the pianist. Some cried out "Whoa!" Others just cried, at what may well be an emotional farewell.

Abq Jew suposes that you just had to be there. But since he wasn't there - and, probably, neither were you - here is the YouTube video: