I Don't Know.  In honor of the Major League Baseball's 2011 All-Star Game, Abq Jew is proud to present his own interpretation of "Who's On First", the greatest comedy routine ever, originated and originally performed by two of the greatest Jewish Comedy All-Stars ever - Bud Abbott and Lou Costello. 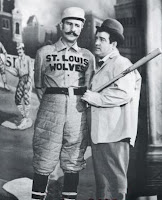 OK ... as it turns out, Lou Costello was not Jewish.  And William Alexander "Bud" Abbott?  If Joey Bishop - aka Joseph Abraham Gottlieb - could be Jewish, why not Bud Abbott?

But consider this: Bud Abbott married the former Betty Smith in September 1918 - in a Christian ceremony.  When the couple renewed their vows  in March 1950 - they reportedly did so in a Jewish ceremony. So there.

Abq Jew's "Duke City" interpretation of "Who's On First" highlights the features, capabilities, and ... well, let's just call them idiosyncracies ... of Xtranormal Movie Maker, of which Abq Jew has previously been on the receiving end only.  This video is, therefore, a major creative leap, probably forward.


If you want your comedy routine in the classic mode - click here, as Abbott and Costello perform "Who's On First" in their 1945 film "The Naughty Nineties".

And if you want your comedy routine in the political way, click here, as W and Condi take a crack at it.