A Guest for Dinner

Christopher Guest, as if you didn't know, is the Actor / Writer / Director responsible for such modern film classics as This Is Spinal Tap. A Mighty Wind, Best in Show, and For Your Consideration ("Home for Purim").  And the folks mentioned in the paragraph above are members of Mr Guest's usual cast of characters, each one just slightly better than the others and each performance just slightly better than the one preceding. 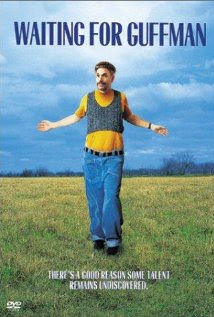 Let's talk about Waiting for Guffman, one of Mr Guest's, alas,  lesser-known masterpieces.

Abq Jew cannot explain why Waiting for Guffman is lesser-known, but he will now cheerfully explain why WfG is a masterpiece.

My Luncheon with Schelly, as you are no doubt by now aware, conjured up images in what is left, after many years in high tech, of Abq Jew's mind, of the famous action flick My Dinner with Andre.

No, MDwA is not known as an action flick.  And it is that ... dichotomy ... that caused Abq Jew, one winter's evening many years ago at the home of dear NJ friends who now live in CT, of all places, to Roll On Floor Laughing for more than an hour.

"But wait a minute!" Abq Jew hears you cry.  "Where is the Jewish connection to all this?  This is supposed to be a Jewish blog!

That's an easy one.  First of all: Abq Jew's NJ / CT friends are Jewish.  And: while Mr Guest is probably not Jewish, Eugene Levy almost certainly is.  Along with Bob Balaban and Ed Begley, Jr.  Yes, Ed Begley, Jr.  For, as The Daily Beast reports:


In Christopher Guest’s folk-music mockumentary A Mighty Wind, Ed Begley Jr.’s Lars Olfen, a Swedish-American public-television producer effortlessly laces his language with the mamaloshen: “The naches that I'm feeling right now,” Olfen tells Bob Balaban’s character Jonathan Steinbloom, “because your dad was like mishpucha to me. When I heard I got these tickets to the Folksmen, I let out a geschrei, and I'm running with my friend, running around like a vilde chaya, right into the theater, in the front row! So we've got the shpilkes, 'cause we're sittin' right there... and it's a mitzvah, what your dad did, and I want to try to give that back to you. Kinehora, I say, and God bless him.”


Oy! Though Michele Bachmann once worked on a kibbutz and has always been pro-Israel, her Jewish street cred is hurting after a recent interview with Greta van Susteren.  Discussing President Obama’s audacity, Bachmann used the Yiddish word for it—“chutzpah”—but pronounced it CHOOT-spa. (It’s actually HUT-spa.) Naturally, Bachmann’s gaffe has already given her critics a lot of naches.

In case you missed it, here is a replay:


So where were we?  Oh yes.  With Abq Jew & family & friends, watching Christopher Guest's lesser-known masterpiece, Waiting for Guffman.  ROFL.  Because of one brief scene, in which Corky St Clair, played by Mr Guest, shows off his My Dinner with Andre action figures during the tour of his shop.


Once again, Abq Jew points out that laughter is not forbidden during the Three Weeks, or even during the Nine Days.  We will get through this mourning period together.  May we share an ROFL - soon!  Me oui!