How To Remember Gettysburg

Mine Eyes Have Seen The Glory:  Seven score and eight years later, how should we remember the Battle of Gettysburg?  Jane Eisner offers one answer in The Jewish Daily Forward's Editor's Notebook:


The bloodiest, most significant, most celebrated battle of the Civil War ...

But Eisner also relates the power of Gettysburg - acknowledgment of the "shattering cost of war" - to the power of peace. 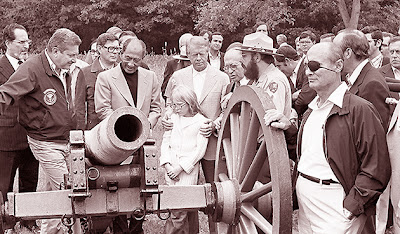 That particular message played out powerfully on September 10, 1978, when President Carter decided to bring Egyptian President Sadat and Israeli Prime Minister Begin on a little road trip from nearby Camp David.

Abq Jew has had the privilege of visiting the town and battlefield of Gettysburg, home to Gettysburg College and the Gettysburg Bluegrass Festival (yes, life does go on).  The site and sights are truly awe-inspiring, as Eisner herself notes:


But it’s impossible to view the monuments to the fallen scattered all around the park site — more than 850 altogether — and not be saddened by the overwhelming loss of life suffered in such a short blast of violence. Trace the sloping path of Pickett’s Charge and the sheer brutality of that last, futile fight is still hard to comprehend — 8,000 dead in less than an hour.

Yes, life does go on.  On this Fourth of July, we hope that through the suffering - on all sides - our beloved Israel and her neighbors can build a true and everlasting peace.


... that from these honored dead we take increased devotion to that cause for which they gave the last full measure of devotion - that we here highly resolve that these dead shall not have died in vain ....