Let Us Speak of Rope

But Not of the One Hanged:  There is a French proverb: "Never speak of rope in the family of one who has been hanged." But what about one who was hung?  Abq Jew now dares to step into this treacherous territory. 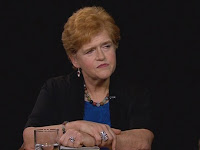 Charlie Rose recently spoke with Deborah Lipstadt, Professor of Modern Jewish History and Holocaust Studies at Emory University and author of  The Eichmann Trial.  You can watch their deep, probing, moving conversation here.

Dr Lipstadt is clearly an intelligent and well educated woman, a diligent researcher, powerful writer, and forceful speaker.  And Abq Jew followed her statements carefully, trying to capture and savor each word, regardless of the distastefulness of the subject.


[The writer] said he was taught that curtains are hung and people are hanged, and he is correct. It's not quite that cut-and-dried — some of my reference books say hung isn't wrong, just less customary, when referring to past executions, and the Random House Unabridged Dictionary says that hung is becoming more common — but the majority of my books agree that the standard English word is hanged when you are talking about killing people by dangling them from a rope. Therefore, it's correct to say that Saddam Hussein was hanged in Baghdad on Saturday, December 30, 2006.

A minor aside: Hanging, properly executed, does not kill people by "dangling them from a rope" (strangulation).  When done correctly, hanging snaps the necks of the condemned by dropping the condemned through the gallows' trapdoor.

Hung?  Hanged?  As former Vice President Dan Quayle reminded us, "What a terrible thing to have lost one's mind. Or not to have a mind at all. How true that is."

Abq Jew surely lost his mind (or may not have one at all), and quickly conjured up the famous (but aren't they all?)  hanged / hung scene from Blazing Saddles:


You may wonder: Is there any point in any discussion where good grammar doesn't matter?  Abq Jew points you to an incident reported in Bill Bryson's book, The Mother Tongue: English and How It Got That Way (end of Chapter 9, page 146):


Perhaps for our last words on the subject of usage we should turn to the last words of the venerable French grammarian Dominique Bonhours, who proved on his deathbed that a grammarian's work is never done when he turned to those gathered loyally around him and whispered: "I am about to - or  I am going to - die; either expression is used."

I read her book and it was pretty good, if all together scholarly. So it's not a novel or even a David McCullough non-fiction account of John Adams. It's an ivory tower take-down of the trial and the participants, most particularly of its prior "hisotian," Hannah Arendt, who heavily editorialized the affair.