Sing Out!  Last night, the Ovation Network (DirecTV Channel 274) presented Festival: Folk Music at Newport 1963-1966, a film about - what else? - the seminal Newport Folk Festivals of those early folk revival years.

All the greats were there (and, by direct implication, Abq Jew was not). Pete Seeger appeared young, although he was among the oldest and most experienced performers. Joan Baez sang with crystal clarity and Judy Collins - Judy 'Blue Eyes' - with delicate purity.  Jim Kweskin & The Jug Band - Abq Jew's heroes! - performed with verve and elan.

And then there was Bob Dylan, looking like a little Jewish kid from Minnesota, and sounding - like a little Jewish kid from Minnesota.  The film showed Dylan performing both before and on that fateful day - July 25, 1965 - when Dylan went electric, abandoning the acoustic orthodoxy of the folk music cognoscenti.  The only time The Jewish People have been more ... disappointed ... was when Shabbatai Zevi converted to Islam. 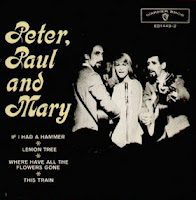 But the best performance of the Festival - and, in Abq Jew's not-too-humble opinion, the best folk music performance of any festival, anytime, anywhere  - was that of Peter, Paul and Mary.

The song?  Originally titled "The Hammer Song" when written in 1949 by Pete Seeger and Lee Hays, but now known as "If I Had A Hammer".

Conceived as a labor song (note its symbology) and first published on the cover of the premier edition of Sing Out! Magazine, "If I Had A Hammer" became one of the most popular songs of our nation's Civil Rights Movement.  Click here to enjoy it once again.