Shalom, Shalom:  This month the New Mexico Jewish community says Shalom, Shalom to Sam Sokolove and to Suki Halevi, as the former departs the Executive Directorship of the Jewish Federation of New Mexico (JFNM) and the latter arrives in Albuquerque to become Director of the New Mexico office of the Anti-Defamation Leage (ADL).

First, Sam. Here is what JFNM President Sabra Minkus has to say in this month's issue of The New Mexico Jewish Link.


As you may already be aware, Sam Sokolove has decided to step down from his position of executive director of the Jewish Federation at the end of this calendar year. His last day is Wednesday, December 31.

For the last decade, Sam has helped move our federation – and our community – from strength to strength. I know the Board of the JFNM joins me in supporting his decision to pursue new opportunities, and looks forward to publicly recognizing Sam’s exceptional service before his departure. 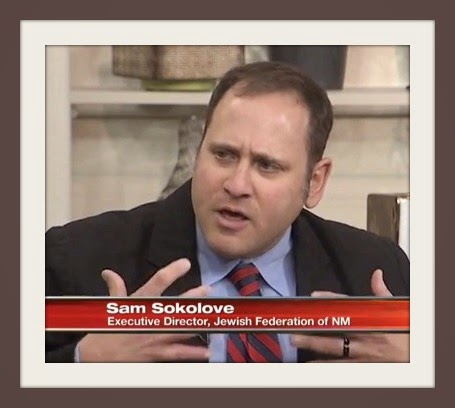 With assistance from the Mandel Center for Leadership Excellence at the Jewish Federations of North America, the JFNM Board of Directors has launched a search process for our next Executive Director, and has convened a search committee comprised of the following: Sabra Minkus and Jane Hochberg, co-chairs; Jon Bell; Mimi Efroymson; Marvin Gottlieb and Marisa Johnson.

Our goal is to have a new executive director on staff by September 1, 2015.

In the interim, beginning January 5, I will be serving as acting executive director. JFNM Staff members Cathy Dimos (Chief Financial Officer) and Dr. Sara Koplik (Director of Community Outreach) will maintain administrative and programmatic oversight during this transitional period.

While we will greatly miss Sam’s vision, ruach and leadership, please know that the Jewish Federation of New Mexico remains a strong agency prepared to meet the needs of Jews in New Mexico, Israel and worldwide through leadership, philanthropy, education and social action.

Our ability to continue our work, however, is dependent entirely on the generosity of supporters like you, and I hope that we can count on your support for the JFNM’s 2015 Annual Campaign.

If you haven’t yet done so, please call (505) 821-3214 or visit www.jewishnewmexico.org to make your commitment today. 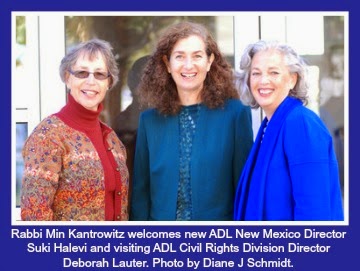 Next, Suki. Here is some of what Albuquerque Judaism Examiner Correspondent Diane J Schmidt has to say in this month's issue of The New Mexico Jewish Link (and also in an Examiner article).

Suki Halevi is the new face of the Anti-Defamation League for New Mexico. A serious, dedicated woman of principle, she comes to Albuquerque most recently after seven years on the island of Maui.

She stands on the traditions she learned growing up in Beth El Synagogue in West Hartford, Connecticut, inspired by Rabbi Stanley Kessler, a prominent civil rights leader who demonstrated with the Freedom Riders and marched with Dr. Martin Luther King, Jr., along with Kessler’s teacher, Rabbi Abraham Joshua Heschel.

About Rabbi Kessler, Halevi said, “His sermons inspired me from childhood and made a clear connection between Judaism and social justice.”

Halevi graduated from Vassar College and Duke University School of Law, then practiced commercial law with an emphasis on ESOPs, employee stock ownership plans, which she sees as a vehicle for employees to have equity and sometimes a voice within companies.

After her daughter entered college, Halevi felt it was time to do something different. She moved to Hawai’i, where the opportunity to work in community social action brought unexpected life-changing experiences.

From strength to strength.

Sam's contributions to the JFNM and to the New Mexico Jewish community have been immeasurable. And Suki's potential is unlimited.

And finally, something else new. Stay tuned!