Shabbat Thanksgiving 2014: On this happy day, known in America as Black Friday, Abq Jew is very happy to present to you, his dear readers, this video of Dion and the Belmonts singing their first hit, I Wonder Why. 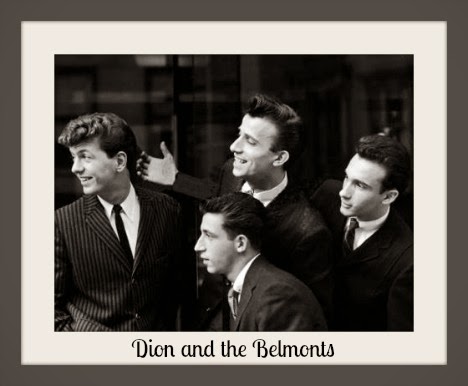 And if you, too, wonder why, Abq Jew will explain:


No particular reason. It's just a happy video.

Who are Dion and the Belmonts? Wikipedia tells us:


Dion and the Belmonts were a leading American vocal group of the late 1950s. All members were from the Bronx, New York City.

The name The Belmonts was derived from the fact that two of the four singers lived on Belmont Avenue in the Bronx, and the other two lived near Belmont Avenue.

About Dion, Wikipedia tells us:


Dion was born to an Italian-American family in the Bronx, New York.

As a child, he accompanied his father, Pasquale DiMucci, a vaudeville entertainer, on tour, and developed a love of country music – particularly the work of Hank Williams.

He also developed a fondness for the blues and doo-wop musicians he heard performing in local bars and on the radio.

His singing was honed on the street corners and local clubs of the Bronx, where he and other neighborhood singers created a cappella riffs.


In 1968, as a solo performer, Dion recorded Abraham, Martin and John, written by Dick Holler.

And as for I Wonder Why, Wikipedia tells us:


I Wonder Why is a doo-wop song, written by Maxwell Anderson (lyrics) and Ricardo Weeks, and first recorded by Dion and the Belmonts (released as Laurie Records' first single, number 3013), becoming the group's first national pop chart hit, in 1958.

It is sung from the point of view of a man telling his girlfriend that he loves her but does not know why. The song is noted for Carlo Mastrangelo singing the bass part in rhythm.

Dion was inducted into the Rock & Roll Hall of Fame in 1989. The Belmonts, for reasons that Abq Jew cannot even begin to understand, were not.

Nevertheless, Dion said of the Belmonts:

That's what 'I Wonder Why' was about.

We kind of invented this percussive rhythmic sound. If you listen to that song, everybody was doing something different.

There's four guys, one guy was doing bass, I was singing lead, one guy's going 'ooh wah ooh', and another guy's doing tenor.

It was totally amazing. When I listen to it today, often times I think,

"Man, those kids are talented."