Every So Often: As Abq Jew has often noted (see Got Midrash? and Moses On The Mesa, et al), everyone loves a good story. And Thanksgivukkah - this year's rare convergence of Thanksgiving and Hanukkah - inspires some of the best. 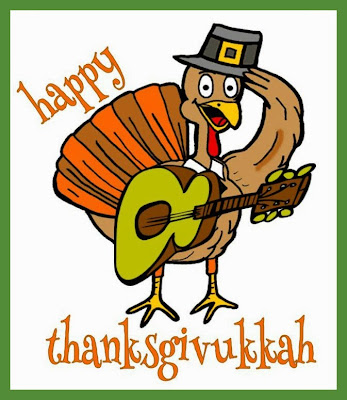 But how rare is this convergence? Abq Jew strongly believes that - especially if the joint holiday celebration is rare - it should be well done.

The first really BIG Thanksgivukkah story is that the convergence of the two holidays has only happened once before and will only happen again in about 75,000 years.

Where do these stories come from? And - are they based on truthiness? Well ... no less a Jewish authority than Wikipedia tells us the history of Thanksgivukkah:


Thanksgiving Day has fallen during Hanukkah at least twice between 1863 (when Thanksgiving was proclaimed a U.S. federal holiday by President Abraham Lincoln) and 2013: in 1888 Thanksgiving was the first day of Hanukkah, and in 1899 it was the fourth day.

Thanksgiving occurred later in those two years than is possible under current U.S. law (as a result of changes between 1939 and 1941); as a result of this confusion, some media reports have mistakenly claimed that Thanksgivukkah has never occurred since Lincoln.

Because the Gregorian and Jewish calendars have slightly different average year lengths, over time they drift out of sync with each other. As a result of this, Thanksgiving Day will not fall entirely within Hanukkah again in the foreseeable future.

One physicist has calculated that, if the Jewish calendar is not revised, Thursday, November 28 will not fall during Chanukah again until the year 79811.

For example, 2070 will be one such year, when the first night of Hanukkah will be the evening of Thursday, November 27. 1918 was another such year. 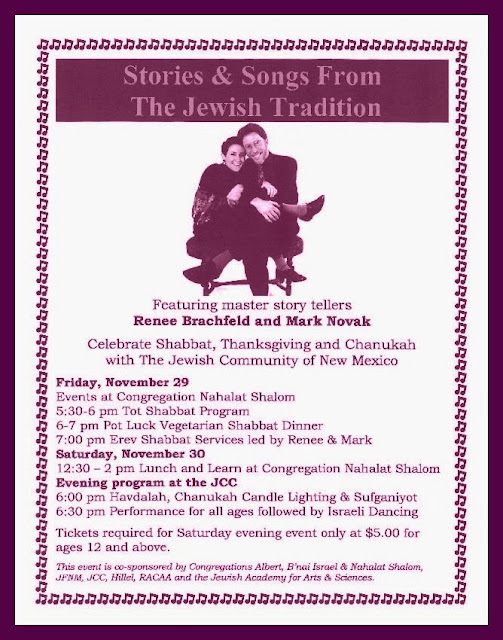 The weekend will begin with Friday evening Kabbalat Shabbat Chanukah services at Congregation Nahalat Shalom; continue with a Lunch and Learn, also at Nahalat Shalom; and conclude with a joyous Motzei Shabbat performance of Honey From the Rock at the Albuquerque JCC. 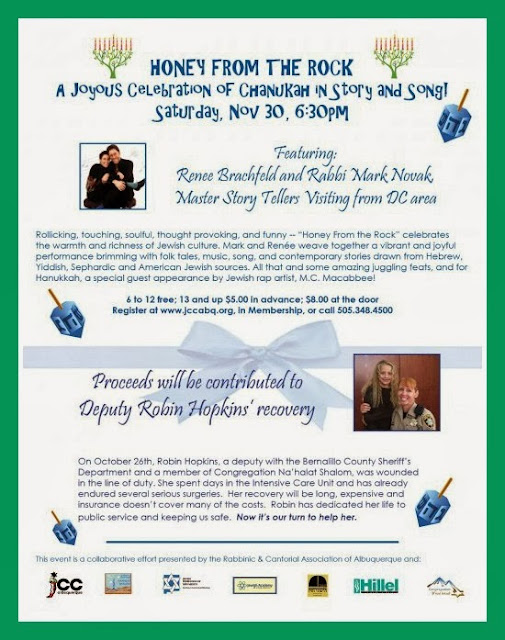 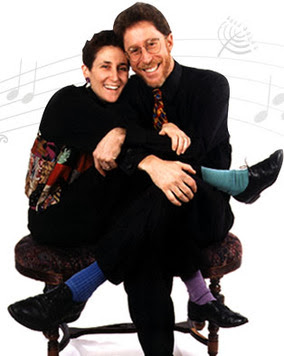 Renée Brachfeld and Mark Novak are master storytellers. Since 1993, this husband-wife duo have been presented as Scholars in Residence for Shabbatonim and retreats at over 130 synagogues across the US and Canada, leading services, presenting workshops, and performing for both adult and family audiences.  Their recording, King Solomon's Daughter, was awarded the Parents' Choice Gold Award.  They have been featured presenters at LimmudFest in England, Ruach HaAretz,  Routes, and the Seattle International Storytelling Festival.

Mark is a community rabbi (ALEPH 2012), hazzan, musician, and storyteller. He serves as spiritual guide of Minyan Oneg Shabbat, Washington DC's Renewal minyan. Mark has served as hazzan and rabbi at Congregation Adas Israel, as well as many other DC area congregations.  He is also the leader of the eponymous Mark Novak Band, a popular choice for Jewish weddings celebrations throughout the DC area. Mark began his music career as a child, singing in a professional Jewish choir, and appearing on Broadway in the musical Oliver. From 1977-1986 he was the music director of Living Stage at Arena Stage in Washington, DC. His original theater pieces have been performed at Wolf Trap Center for the Performing Arts and The Smithsonian.

Renée has been a professional storyteller since 1986. In addition to performing she teaches a variety of workshops, including family storytelling, integrating storytelling in the classroom, and building community through storytelling. Renee also leads High Holiday services for young families at Congregation B'nai Israel in Rockville, MD.  Her work has been published in Penina Schram’s Chosen Tales, and Goldie Milgram’s Mitzvah Stories. 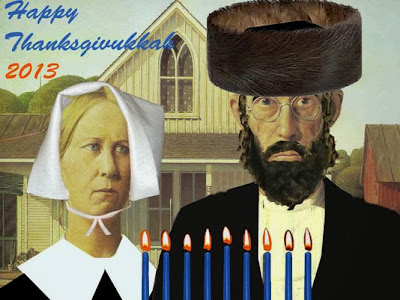 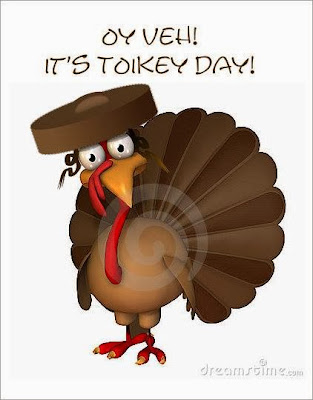