Or: Twenty-One Touchdowns and a Field Goal: Abq Jew has already covered the Gettysburg Address (see How To Remember Gettysburg). Seriously. 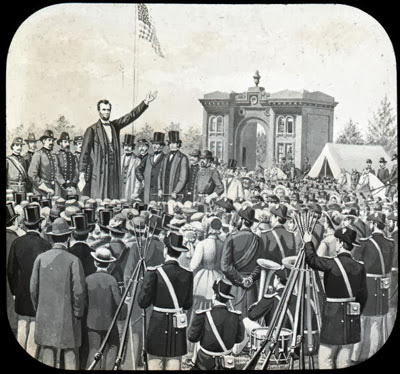 New information about the day of the Gettysburg Address - November 19, 1863 - is still coming out, one hundred and fifty years later.

For example: You may realize that the above image is not an actual photograph of the event. But they had cameras then; so how come there aren't any photos?

First answer: Because the president's speech was over before the photographer had time to take one. Think about that. Second answer: There are photos. We're just not sure which captured image is that of Abraham Lincoln.

And we still marvel at How the Gettysburg Address Worked:


Quick, finish this sentence: "Fourscore and seven years ag­o…" Most of us rec­ognize the famous openin­g of Abraham Lincoln's Gettysburg Address, and some might be able to stumble through a few more phrases. If you grew up in the United States school system, chances are at one time you memorized the Gettysburg Address (or at least you were assigned to have it memorized).

What is it about this particular speech that has inspired the American school system to deem it so important (besides the fact that it's short enough for kids to memorize)? The Gettysburg Address has impact well beyond the schoolyard, too - historians and modern political theorists often use it to explain how the American government is supposed to work.

But somehow, the Gettysburg Address has endured as one of the most important documents in U.S. history, ranking up there with the Declaration of Independence and the Constitution. What did Lincoln say that was so meaningful -- and did people immediately recognize how influential the speech would turn out to be? How did 300 words change the way we view our government, our country and our society?

The answer to that middle question is: Yes, people immediately recognized how influential the Gettysburg Address would turn out to be. Allen C Guelzo (in The New York Times' Opinionator) tells us:


The surprisingly short story of the Gettysburg Address is that it was a surprisingly short speech — 270 words or so — delivered by Abraham Lincoln as part of the dedication ceremonies for the Soldiers’ National Cemetery at Gettysburg, on Nov. 19, 1863, four and a half months after the climactic battle of the American Civil War. 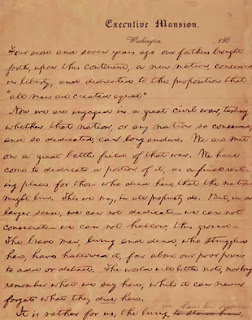 But the long story is that no single American utterance has had the staying power, or commanded the respect and reverence, accorded the Gettysburg Address. It has been engraved (on the south wall of the Lincoln Memorial), translated (in a book devoted to nothing but translations of the address), and analyzed in at least nine book-length critical studies over the last century.

Henry Wadsworth Longfellow put down his morning paper’s report of the address and wrote to his publisher that “Lincoln’s brief speech at Gettysburg … seems to me admirable.” Longfellow’s friend Charles Sumner wrote, “Since Simonides wrote the epitaph for those who died at Thermopylae, nothing equal to them has ever been breathed over the fallen dead.” He added: “The world noted at once what he said, and will never cease to remember it. The battle itself was less important than the speech.”

Drafts of Lincoln's Gettysburg Address do exist, the Library of Congress tells us:


Of the five known manuscript copies of the Gettysburg Address, the Library of Congress has two. President Lincoln gave one of these to each of his two private secretaries, John Nicolay and John Hay.

The other three copies of the Address were written by Lincoln for charitable purposes well after November 19. The copy for Edward Everett, the orator who spoke at Gettysburg for two hours prior to Lincoln, is at the Illinois State Historical Library in Springfield; the Bancroft copy, requested by historian George Bancroft, is at Cornell University in New York; the Bliss copy was made for Colonel Alexander Bliss, Bancroft's stepson, and is now in the Lincoln Room of the White House.

Much more important than these manuscript copies, of course, is the Gettysburg Address Powerpoint Presentation.

Good morning. Just a second while I get this connection to work. Do I press this button here? Function-F7? No, that's not right.

Hmmm. Maybe I'll have to reboot.

Hold on a minute. Um, my name is Abe Lincoln and I'm your president.

While we're waiting, I want to thank Judge David Wills, chairman of the committee supervising the dedication of the Gettysburg cemetery. It's great to be here, Dave, and you and the committee are doing a great job.

Gee, sometimes this new technology does have glitches, but we couldn't live without it, could we? Oh - is it ready? OK, here we go: 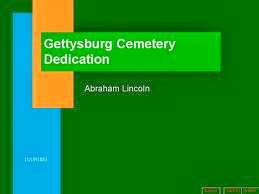 This is, of course, the work of Google Director of Research Peter Norvig.

Much of Peter Norvig's thinking on Powerpoint  is influenced by the work of Edward Tufte. And who, Abq Jew hears you ask, is Edward Tufte? Wikipedia tells us:


Edward Rolf Tufte (/ˈtʌfti/; born 1942) is an American statistician and professor emeritus of political science, statistics, and computer science at Yale University. He is noted for his writings on information design and as a pioneer in the field of data visualization.

Tufte is an expert in the presentation of informational graphics such as charts and diagrams.

Tufte's writing is important in such fields as information design and visual literacy, which deal with the visual communication of information. He coined the term "chartjunk" to refer to useless, non-informative, or information-obscuring elements of quantitative information displays.


Tufte has criticized the way Microsoft PowerPoint is typically used. In his essay "The Cognitive Style of PowerPoint", Tufte criticizes many properties and uses of the software:
Tufte uses the way PowerPoint was used by NASA engineers in the events leading to the Space Shuttle Columbia disaster as an example of the many problems. The software style is designed to persuade rather than to inform people of technical details. Tufte's analysis of a NASA PowerPoint slide is included in the Columbia Accident Investigation Board’s report—including an engineering detail buried in small type on a crowded slide with six bullet points, that if presented in a regular engineering white paper, might have been noticed and the disaster prevented.

Instead, Tufte argues that the most effective way of presenting information in a technical setting, such as an academic seminar or a meeting of industry experts, is by distributing a brief written report that can be read by all participants in the first 5 to 10 minutes of the meeting. Tufte believes that this is the most efficient method of transferring knowledge from the presenter to the audience and then the rest of the meeting is devoted to discussion and debate.

Within the technical writing community of which Abq Jew was, once upon a time, part, Edward Tufte is revered as the Prophet of Information Display. He continues to teach and write; and, of course, he has a website.

As stated above, there are several versions. The version on the Lincoln Memorial has 274 words. However ....

This Thursday evening (19th of Kislev), Abq Jew will observe the sixth yahrzeit of his father, Richard W Yellin, of blessed memory. As Abq Jew wrote in 2011 (see Boogie Woogie), Dad served in the Navy during World War II, mostly aboard LST 273.

"LST" officially stands for "Landing Ship, Tank", whose job it was to drive right up onto the beach into direct enemy (in this case, Japanese) fire, and deposit its load of tanks, supplies, and troops.

"LST" unofficially stands for "Large, Slow Target".  LST 273 was aka "The Grey Ghost".  But she brought Dad home safe and sound, making "273" the family's lucky number. 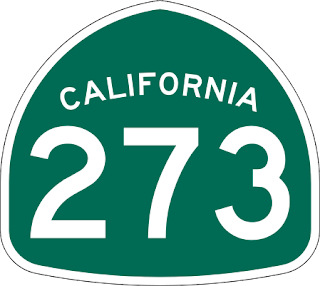 Here's to Abq Jew's mother, Roselyn L Yellin, of blessed memory, a "strong willed redhead" in her own right who waited for Abq Jew's father to come home from the war.  And - here's to you, Dad!