KlezmerQuerque Article Blown Away: If you have read (or glanced at) the February 2013 issue of The New Mexico Jewish Link, you may have seen this advertisement (at the bottom of page 4) for KlezmerQuerque 2013, which will be held (אי״ה) this very Presidents' Day Weekend. 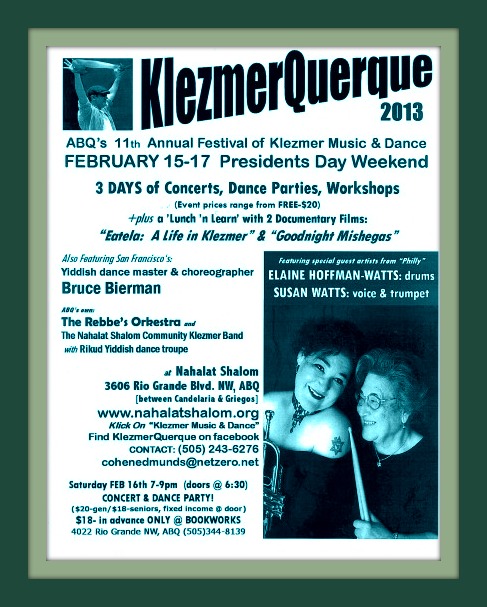 Of course, you may not have seen it - because The Link's ad was in good old black and white (and grey) tones, without Abq Jew's eye-catching color treatment and border. Potential advertisers - please take note!

But even if you saw the advertisement, you surely did not see the accompanying article, KlezmerQuerque Presents a Weekend of Extraordinary Jewish Music.

And that you can blame on the Ziz.

Says Ariela Pelaia, former About.com Guide, in her article What is the Ziz?


The Ziz is a mythological bird that is sometimes called "The Queen of Birds." 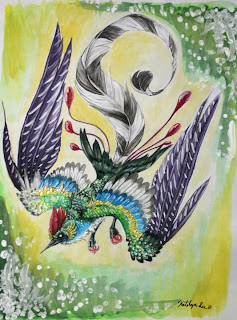 It is said to be so gigantic that it can stand in the middle of the ocean and the waters will only reach its ankles, while the head is in the sky.

The beating of its enormous wings are [sic] capable of changing the direction of the winds.

According to some legends, it is destined to be served as an entree at the Messianic banquet along with the Behemoth and the Leviathan.

It was the beating of the Ziz's enormous wings, Abq Jew claims, that caused the page upon which was printed KlezmerQuerque Presents a Weekend of Extraordinary Jewish Music to fly out of each and every copy of The New Mexico Jewish Link and disappear into the wind.

That, further claims Abq Jew, is the only explanation that makes sense.

To fill in for this unfortunate omission - to keep the Jewish community of Albuquerque and beyond fully informed - and, of course, to encourage attendance at the final event in this year's immodestly eponymous Abq Jew Palooza!, Abq Jew is pleased to provide a handy PDF of the entire missing article. As well as the full text (and picture), below.

KlezmerQuerque presents a wide variety of events for all ages and abilities with prices ranging from free to $15-$20 per event and an all-event early registration discount of $85 for general admission and $70 for seniors, students and those with a fixed income.

On Sunday, February 17, between 10:00 am and 5:30 pm, there will be three 90 minute hands-on workshops taught by the guest artists in instrumental music and dance. Bruce will teach three unique Jewish dance classes: sacred ecstatic Jewish dance, bawdy and profane Jewish dance (aka Yemenite hip-hop), and Yiddish Tango. 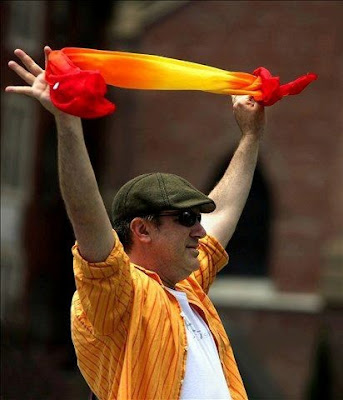 Bruce Bierman, an award-winning actor, director, playwright and choreographer, never suspected that Yiddish dance would play a big part in his life. Upon hearing an album by The Klezmorim during his college years in the 1980’s, he became wholly inspired and soon adapted, directed and choreographed a klezmer musical based on Isaac Bashevis Singer’s Gimpel the Fool for his senior thesis.

After graduating with a degree in theater arts, he toured the country with the acclaimed Aman Folk Ensemble of Los Angeles performing and teaching traditional dances from around the globe. Bruce Bierman is a leading presenter of Yiddish dance for major festivals, performances and conferences including the prestigious Berkeley Jewish Music Festival and the Jewish Contemporary Museum of San Francisco.

Elaine is a musical national treasure. Born in 1932, Elaine Hoffman Watts is a winner of the prestigious 2007 National Heritage Award from the National Endowment of the Arts. She is one of only eight artists from Pennsylvania, and one of only six Jewish artists from the entire country, to be so honored over the last 28 years. Elaine is also the recipient of the Leeway Transformation Award and a Pew Fellowship in the Arts.

She was the first woman percussionist to be accepted at Curtis Institute, from which she graduated in 1954. Hoffman-Watts has performed and taught drums, timpani, and mallet instruments for more than forty years, working in symphonies, theaters, and schools.

In addition to performing with a variety of noted klezmer musicians from around the world, trumpeter and vocalist Susan Watts has shared the stage with Mandy Patinkin at Carnegie Hall, Dudu Fisher, Theodore Bikel, Claire Barry, Boban Markovic,  So-Called, Alicia Svigals, Margot Leverett, Hankus Netsky, and the Klezmer Conservatory Band, among others. Susan is a member of the Fabulous Shpielkes, Frank London’s Klezmer Brass AllStars, Mikveh, and the Klez Dispensers. Recently, she scored and recorded the soundtrack for the award-winning film Breath, and recorded the soundtrack for a documentary on Philadelphia klezmer A Joyful Noise. Susan teaches at klezmer festivals, is an ambassador for women’s rights around the world, and loves good coffee, fine vodka, singing, and playing her trumpet.

The BIG concert and dance party begins at 7:00 pm (doors at 6:30 pm) with local klezmer band the Rebbe’s Orkestra as the opening act for the Hoffamn-Watts/Watts duo.

On Sunday, February 17, there will be three 90 minute music and dance workshops as well as a Lunch ‘n Learn program with the documentaries: Eatela: A Life in Klezmer and Good Night Mishegas featuring Elaine (Eatela) and Susan. Enjoy a delicious milkhik (dairy,fish, veggies, no meat) lunch, and watch the two films.  Afterwards, there will be a brief question and answer period with Elaine and Susan. The reservation deadline is February 8 for the Lunch ‘n Learn.

For more details, contact: Beth Cohen, KlezmerQuerque co-ordinator at (505)243-6276,   cohenedmunds@netzero.net, or go to www.nahalatshalom.org, and click on Klezmer Music/Dance or KlezmerQuerque. Also, KlezmerQuerque is found on Facebook.