There Is A Future 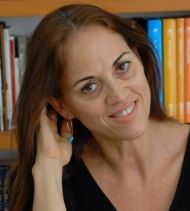 Who is Dr Ruth Calderon?

She is a member of the relatively new Israel political party Yesh Atid (There Is A Future).

Just as importantly, she is a Founder and Chairperson of ALMA, Home for Hebrew Culture in Tel Aviv.

Here is Dr Calderon's bio, from the ALMA website:


Dr. Ruth Calderon is one of Israel's leading figures spearheading efforts to revive the Jewish bookshelf, Hebrew Culture and a pluralistic Israeli-Jewish identity. In 1989, Dr. Calderon was a pioneer when she established the first Israeli secular, pluralistic and egalitarian Bet Midrash for women and men, with an Orthodox colleague.

She then went on to host a TV show on classic and modern Jewish texts, publish several writings and books, and in 1996 founded ALMA - Home for Hebrew Culture. Today Calderon serves as the Chairperson of ALMA, located at the heart of Tel Aviv, which serves as a cultural and studies center for Hebrew Culture and the Jewish text.

Dr. Ruth Calderon is the author of "The Market, the Home, the Heart" a personal homiletic reading of Talmudic legends (2001). Calderon got her PhD in Talmudic literature at the Hebrew University of Jerusalem. She is also a graduate of the first class of the Mandel School for Educational Leadership and a recipient of the prestigious Avi Chai Prize in recognition of her contribution to the propagation of the legacy of Israel.

Here is more about ALMA, again from the ALMA website::


Vision Statement: Hebrew Culture (the meeting point between Jewish culture, Israeli culture and general culture) will become a meaningful, living element of the identity of Jews in Israel and in the Diaspora.

Mission Statement: To operate an educational institution for adults in the field of Hebrew Culture, to train cultural change agents in this field, and to be a creative source for renewed and contemporary Hebrew Culture contents, working within major Jewish communities in Israel and around the world.

And here is what ALMA says about its Beit Midrash:


ALMA acquaints non-affiliated and secular Jews and Israelis with the wealth of Hebrew Culture as a relevant and vital element of today's Jewish identity and Israeli society.

Just the headline from The Times of Israel's article is enough to draw attention:

How many times have you heard the phrase "secular, female Talmud scholar"?

Not often, Abq Jew is willing to bet.

Abq Jew notes with radical amazement that the English term "maiden" is translated from the Hebrew "בּכורה"- which we recognize as "birthright" (as in what Jacob bought (not stole) from Esau); in modern Hebrew, "premiere" or "first". Abq Jew loves the Hebrew language and The Academy of the Hebrew Language!

The Times of Israel went on to say:


An educator, Talmud scholar, and founder of Israel’s first secular, male and female study center, Calderon (No.13 in the new, 19-strong Yesh Atid Knesset faction) used the platform to deliver an impassioned, gracious plea — complete with Talmudic quotations, anecdotes, passages in Aramaic, and constructive interaction with the acting Knesset speaker for the session, ultra-Orthodox Shas MK Yitzhak Vaknin — for the widespread study of Jewish and Hebrew texts as the basis for a new Hebrew culture.

As Abq Jew posts this blog, Dr Calderon's speech has garnered more that 164,000 views on YouTube. Maybe she is on to something.

And here is what Abq Jew believes Dr Calderon is on to: Claiming the Talmud and other Jewish texts as the shared literary heritage of all Jews. Not just the Haredi. Not just the Orthodox. Not just the Dati'im. All Jews.

And The New Jersey Jewish News reports that it was a sabbatical in Northern New Jersey that helped shape Dr Calderon's vision. Imagine that!