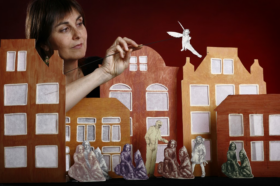 The play is based on a series of drawings made by Sofia, a 16 year old girl; Sofia made these drawings in Holland while she was hiding from the Nazis during the war. By making use of the drawings through various visual techniques, the play tells Sofia’s life story during that period.

Click here for a preview of this prize-winning play:


Sofia was the daughter of Clara Asscher-Pinkhof, a known children’s author. Before Clara was sent to concentration camps and Sofia went into hiding, they published a series of children’s stories – written by Clara and illustrated by Sofia – together. These stories were published in the weekly Jewish newspaper in Amsterdam. Sofia, in time, became a painter.


Efrat Hadani, an actress, puppeteer and sculptress, and Sofia’s daughter, acts in the play and relates her mother’s story. The play, a result of meetings between Efrat Hadani and Pablo Ariel, the director and an actor in the play, uses a special language and allows a meeting of three generations of creative women. The play, which is mainly visual and hardly uses any words, is accompanied by a translation into various languages, allowing it to be performed in front of multi-lingual audiences.

This show is appropriate for audience members aged 13 and up.