Isaac and the Dynamics of Reconciliation

Rabbi Paul Citrin @ OASIS:  You know about OASIS, right?  OASIS (as stated on the organization's website) is

... a unique educational program for adults age 50-plus who want to learn, grow and explore new ideas. We promote successful aging through lifelong learning, health programs and volunteer engagement.

OASIS  Albuquerque's 2012 courses are just getting started, and today's class, Biblical Personalities: Isaac and the Dynamics of Reconciliation was a gem.  The OASIS course syllabus (reprinted by Abq Jew here) states: 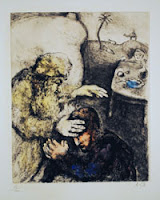 Fixing broken relationships is one of life's greatest challenges. Coming to terms with failures or misguided choices and re-shaping our future can expand our humanity.

The biblical character Isaac is a role model for reconciliation with others and for renewing the self. Though he is not portrayed as a creative genius like his father, Abraham, or the activist like Jacob his son, Isaac can be considered a spiritual paradigm for building human relations.

The course was developed and delivered by Rabbi Paul Citrin, a former rabbi at Albuquerque's Congregation Albert and Temple Beth El in Las Cruces.  Rabbi Citrin called Isaac "among the most fascinating of Biblical personalities".  Why?

Because, Rabbi Citrin explained, Isaac's character is subtle.  We tend to view Isaac as passive; things (some good, others terrible) happen to Isaac, we say, but Isaac doesn't actually do anything.

Rabbi Citrin doesn't buy that.  Instead, he pointed to the difficulty of Isaac's role as Successor to Abraham and cited the Genesis sources that show how Isaac ultimately fulfilled that role - as Isaac reconciles with his past, with an enemy, and, most importantly, with himself.

A great, thought-provoking presentation - as everyone who knows Rabbi Citrin would expect.  Couldn't make it?  Didn't know about it?  Well!  You should check out Abq Jew's "Fifty Plus" page for more OASIS offerings!

As it turns out, Rabbi Citrin will be teaching one more course at OASIS this season:


Life in 3-D: Diversity, Debate, Dissent @ Thu 02 Feb 2012   POSTPONED!
What It Is:  The breakdown in civil political dialogue and the polarity of cultural values are hallmarks of contemporary life in the United States. Ideological divisions fray the fabric of the nation. Is there any hope for creating a more rational, respectful, and productive public exchange? Some answers may lie in Jewish texts - from the Talmud to modern writings. Studying selections from these texts, we will examine how competing truths may co-exist in balance.

But wait!  Rabbi Deborah Brin, of Albuquerque's Congregation Nahalat Shalom, will be teaching a course:


The Book of Esther Through a Modern Lens @ Fri 09 Mar 2012
What It Is:  A close look at the Book of Esther reveals some interesting things they don't teach in Sunday School! Set around 400 BCE, the story depicts life in Ancient Persia, with Queen Esther as a main character. God is never mentioned in this story which is the basis for the Jewish holiday of Purim. We will use a traditional rabbinical teaching style that includes everyone in a reading of this short but powerful text.

And there's more!  Abq Jew must bring to your attention that the Executive Director of OASIS Albuquerque is Dr Michael Nutkiewicz, a distinguished scholar in his own right.  So - he will be teaching, a course, too:


Martin Buber: His Life and Philosophy @ Tue 06 Mar 2012 @ 10:30 am - #76
What It Is:  Martin Buber (1878-1965) was a leading twentieth century German-Jewish philosopher. His "philosophy of dialogue"--found in his 1923 book I and Thou--made Buber one of the most widely regarded spiritual thinkers in the West, who influenced the fields of religion, psychiatry, and education. Buber also brought the teachings of Hasidism to the general public through his translations (and re-writing) of Hasidic tales. We will learn about his life and thought.

Not too shabby!  And OASIS is but one (important) venue for adult education in the Duke City.  Abq Jew is continually amazed at just how much Albuquerque and New Mexico have to offer.  Go & do!  Go & learn!