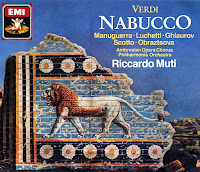 Known as Verdi's "Jewish" work of art, it tells the story of Jewish exiles from Judea after the loss of the First Temple in Jerusalem. The opera, with its powerful chorus, established Verdi as a major composer in 19th century Italy.

The opera - and the chorus - still speak to us, sometimes in surprising ways.  Last spring, they sparked a conversation about the importance of culture, the arts, and the teaching thereof.

Composer and director Raphael Mostel writes in The Jewish Daily Forward of the Best Classical Performances of 2011:


The chorus of Hebrew slaves ... from Verdi’s opera “Nabucco” (Nebuchadnezzar) has become Italy’s unofficial national anthem. It is spontaneously sung at soccer games, and all sorts of other occasions.

The moment of the year came this past spring when conductor Ricardo Muti, in an almost unprecedented gesture, halted his performance of “Nabucco” at the Rome Opera after an audience member shouted “Viva L’Italia!” during the tumultuous standing ovation which followed the chorus. Completely breaking with tradition, Muti turned around and directly addressed the audience: “Yes, I am in accord with that ‘Viva L’Italia!’ When the chorus sang ‘Oh mia patria si bella e perduta!’ [“Oh, my country so beautiful and lost!:], I thought to myself that, if we slay the culture on which the history of Italy is founded, truly our country will be beautiful and lost.” He then conducted the audience in a repeat of the chorus (you can watch the video here) and there wasn’t a dry eye in the house. Finance minister Giulio Tremonti, who had instituted drastic cuts in the cultural budget, thus prompting Muti’s impromptu speech, had been quoted as saying, “You can’t eat culture.” Berlusconi’s government backed down in the face of this Rome opera sing-along. Muti is reported to have marveled that everyone in the audience knew all the words!


Chorus of the Hebrew Slaves