Another Catch! The 49ers Win!

My Son, Grandmama, The Catch:  The San Francisco 49ers defeated the New Orleans Saints yesterday, 36-32, in an exciting game that featured four lead changes in the closing minutes. 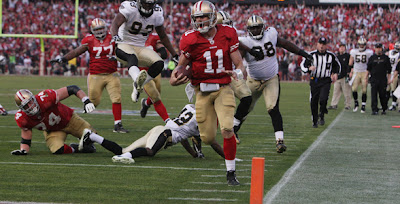 The win was capped by an impeccable catch by 49er tight end Vernon Davis of a perfect pass from  quarterback Alex Smith.  The 49ers website calls the game at Candlestick Park an "instant classic", saying:


After a memorable postgame scene that saw many 49ers get emotional after the win, sportswriters and players were scrambling to name the play which rivaled Joe Montana’s touchdown pass to Dwight Clark, which took place in the opposite end zone 30 years ago.

Abq Jew remembers exactly where he was when Dwight Clark made The Catch.  He was in his car, exiting Highway 101 at the San Francisco airport - just around the bend from Candlestick Park - on his way to pick up Grandmama, who was flying in from New York to join Abq Jew & family as we celebrated the first birthday of our son, Dov Israel Yellin. 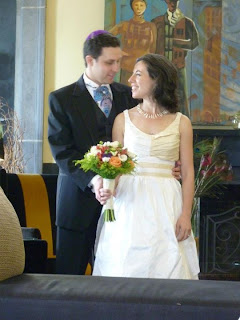 Dov, you may recall, was married in September to Dr Jessica Robin Schnur, a now licensed (passed the boards!) general surgeon who makes her living by cutting people up as they sleep.

And Dov just celebrated his 31st birthday as he & Jessica took their honeymoon to Chile, where, reportedly, it is summer. (They just got back this morning.)

Grandmama, in case you were wondering, is still around (87, kayna hara) and in reasonably good health, especially after getting her pacemaker replaced a few weeks ago.

Abq Jew remembers: all of a sudden everyone started honking their car horns, and a general sense of a) relief and b) jubilation took over the entire known world (which is to say, Northern California).

To those of us who had lived through the days of 49er pain and agony played out in Kezar Stadium under quarterbacks John Brodie and Y A Tittle (yes, the former NY Giant), The Catch was just short of The Coming of the Messiah.

In case you missed it - or if you want to relive it - here is the entire drive that culminates in The Catch and the now largely forgotten PAT, which won the game.