When Rabbis and Cantors Earn Their Pay:  Pirke Avot (Ethics of the Fathers) says "Do not make the Torah into a spade with which to dig."  Why, then, do rabbis and cantors receive salaries?  To compensate them for loss of revenue - time spent in public service in which they were not able to engage in more gainful employment.  Or, as Abq Jew likes to put it - to keep them from going into another line of work altogether.

Abq Jew is very glad that Cantor Paul L DuBro is not in another line of work.  Cantor DuBro graced the bima at Congregation B'nai Israel on Rosh Hashanah - with a great voice and a warm personality.

Based in St Louis, Cantor DuBro has enriched that Jewish community with numerous appearances and concerts. He has appeared as a soloist with the St. Louis Symphony, and has made several guest appearances as Hazzan in Cincinnati, Phoenix, New York, and Vancouver. Abq Jew says: Catch him at B'nai - if you can!

Way back in September, Rabbi Stephen Landau presented One Night, Standing Together, Part 2 of the two-part lecture series, to a still small but still enthusiastic group of WestSiders meeting at Case de Shalom in Rio Rancho.

The best part?  A screening of the documentary 18 Voices Sing Kol Nidre and a discussion of the prayer’s meaning in our lives. And speaking of Kol Nidre - Abq Jew received the following comment (from a highly traditional and respected member of the New Mexico Jewish community):


I understand that Kol Nidre is associated with awe because it is the entry into Yom Kippur. I also realize it has become a favorite for lovers of operatic acrobatics. I think among traditional and learned Jews, it doesn't occupy nearly such an important spot. I would bet that most of my teachers and fellow yeshiva students would associate the most awe filled responses with the 'avodah' in Yom Kippur mussaf, or with Neila at the end of the day. A comparison of the content alone makes those more obvious choices. 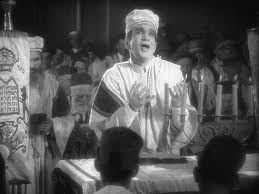 Well, Rabbi Landau and the group talked about this, and - in a way - we agree: "A comparison of the content alone makes [Avodah or Neilah] more obvious choices."  Ah, but Kol Nidre and Yom Kippur are not about "content alone."  Of the traditional Ashkenazic sound of Kol Nidre, Tolstoy said, "Its melody echoes the story of a grief-stricken nation."  Abq Jew agrees - the melody is more important than the words.

And speaking of the melody - yes, Al Jolson sang the traditional Ashkenazic melody in The Jazz Singer.  Perry Como, Johnny Mathis, and Meshugga Beach Party have versions, too.  But Jolson brings tears to your eyes.


But all the above refers to the traditional Ashkenazic melody of Kol Nidre.  Abq Jew went looking on YouTube, and found a marvelous Moroccan version.  This you gotta hear!


This moved Abq Jew to ask, in the famous words of Butch Cassidy, "Who are those guys?" 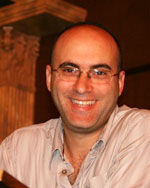 Eyal Bitton is currently the Cantor of Beth Jacob Synagogue in Hamilton, Ontario, where he combines traditional Ashkenazi and Moroccan melodies along with his own pieces.

His choral compositions and arrangements have been performed in Montreal, Ottawa, Massachusetts, New York, California, and Israel. He has conducted choirs for The Spanish & Portuguese Synagogue (Canada's first congregation), Adath Israel Poale Zedek, Jewish Peoples and Peretz Schools, La Chorale Kinor of the Communauté Sépharade Unifiée du Québec, and others.

So as long as we're listening to Moroccan versions - let's listen to the Moroccan version of El Nora Alila, which usually is on the B side of the 45.  Anyone not on Social Security know what Abq Jew is talking about?


It turns out that Abq Jew learned this melody from Cantor Jeffrey Shiovitz, since 1988 of Congregation Sons of Israel in Briarcliff Manor, New York - but formerly of Temple Beth Ahm in Aberdeen, New Jersey.  That must have been about 25 years ago ....


Abq Jew wishes you an easy fast and a meaningful day.
If Abq Jew has offended you or caused you any pain
during the past year, please forgive him.
G'mar Hatima Tova!

I am in full agreement with ABQJew regarding Cantor Paul L DuBro.

I grew up in another B'nai Yisroel, in Washington, DC. I did not until about three years ago realize and understand how lucky I was to have been to services there, led by the likes of Cantors Weiss and Friedman. And now, with Cantor DuBro, we have all gotten lucky.

And, thanks for the Moroccan melodies.