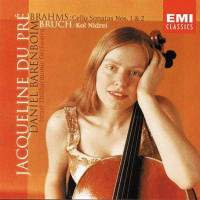 
Jacqueline Mary du Pré OBE (26 January 1945 – 19 October 1987)
was a British cellist, regarded as one of the greatest players of the instrument. She is particularly associated with Elgar's Cello Concerto in E Minor; her interpretation has been described as "definitive" and "legendary."  Her career was cut short by multiple sclerosis, which forced her to stop performing at 28 and led to her premature death.
Max Christian Friedrich Bruch (6 January 1838 – 2 October 1920)
also known as Max Karl August Bruch, was a German Romantic composer and conductor who wrote over 200 works, including three violin concertos, the first of which has become a staple of the violin repertoire.


Next - here is OurJewish Community.org, which offers

Abq Jew wishes everyone an easy fast but a meaningful day.