The End; or, A New Beginning:  Simhat Torah has come and gone, and with it, the 5772 / 2011 Jewish Holiday Season.  Abq Jew missed much of the MLB Baseball Playoffs (alas, the Yankees were eliminated early), but only two World Series games.

Of course, the highlight of Simhat Torah is - completing the reading of one year's Torah cycle (Parshat Vizot Habracha) and immediately starting in on another (the Six Days of Creation in the first chapter of Parshat Bereshit plus the Sabbath paragraph of the second chapter).  Accompanied by singing and dancing, of course.

Were you at Congregation B'nai Israel for Simhat Torah?  If you were, you surely must remember when the excellent Torah Reader mentioned to Abq Jew (who was Gabbai-ing at the time) that he wasn't sure he could get through the entire reading error-free.  And Abq Jew responded:


Just take it one day at a time.
This is not the best laugh line that Abq Jew has ever produced.  No, that would be The Greatest Pun Ever Told, which Abq Jew did indeed tell at (no pun intended) Tel Ashdod in the Summer of 1968.  More about that later ....


"It was a moan-a, a groan-a, he left her alone-a!
He didn't write a letter and he didn't telephone-a!"
Why do I have this stuck in my head...?
Curse you The Reduced Shakespeare Company!

Now, at some point during the Jewish Holiday Season, a FB Friend of The Reduced Shakespeare Company left the above message on our Facebook Wall.  And Abq Jew thought nothing of it - until Simhat Torah.

How, you wonder, did this possibly come up?  Well, on Simhat Torah - when it falls on a weekday, which it always does, because if it fell on Shabbat that would mean that Yom Kippur would fall on a Sunday, which the Rabbis do not allow - anyway, the Hatan Torah (Shishi = 6th) reading begins with the Hebrew word מענה, which is pronounced "Mi'ona".  And, as mentioned above, Abq Jew was Gabbai-ing, so that word sort of stuck out.  See where we're going with this? 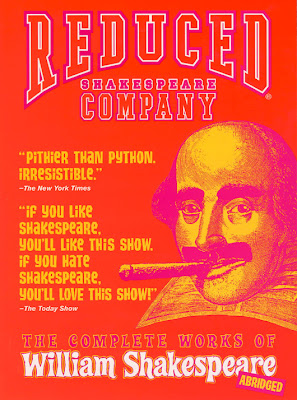 And now you're wondering - who the heck is The Reduced Shakespeare Company?  Well, they are the renowned writers and performers of The Complete Works of William Shakespeare (Abridged) and other masterpieces.  As their website proudly proclaims:


All 37 Plays in 97 Minutes! An irreverent, fast-paced romp through the Bard’s plays, The Complete Works of William Shakespeare (Abridged) was London’s longest-running comedy – 10 years in the West End at the Criterion Theatre – and is NOW ON TOUR! Join these madcap men in tights as they weave their wicked way through all of Shakespeare’s Comedies, Histories and Tragedies in one wild ride that will leave you breathless and helpless with laughter.
Warning! This show is a high-speed roller-coaster type condensation of all of Shakespeare’s plays, and is not recommended for people with heart ailments, bladder problems, inner-ear disorders and/or people inclined to motion sickness. The RSC cannot be held responsible for expectant mothers!

What - did you really think Abq Jew would leave you hanging?  Here's "The Othello Rap", a snippet of The Complete Works ... (Abridged).

Now, back to The Greatest Pun Ever Told. Abq Jew will check with his legal team and his agents, and will share this with you - just as soon as the trademarks and copyrights are secured and the book and movie rights are nailed down.  Yes, it's that good.