Nachman Me-Uman:  Why, oh why, didn't anybody tell Abq Jew about this?  There is a Na Nach phenomenon happening - in Israel, in New York, and all over the Jewish world.  In Albuquerque?  Not so much.

Who are the Na Nachs?  Remember Abq Jew's Burnt Books post back in August?  We talked about Rodger Kamenetz's newest book - Burnt Books - about the lives of Rabbi Nachman of Bratslav and Franz Kafka.  Kamenetz discussed - all too briefly! - the Na Nach movement in his book.  Just to let you know - the Na Nachs have their own website and their own Wikipedia page.

This all has to do with Rabbi Nachman of Bratslav (Breslov), the Hasidic Master who moved to Uman just before he died.  There is a Breslov Research Institute that publishes works by and about Rabbi Nachman; there are Breslover Hasidim who follow the words, works, and teachings of Rabbi Nachman; and there are the Na Nachs.


Na Nach Nachma Nachman Meuman (Hebrew: נ נח נחמ נחמן מאומן‎) is a Hebrew language name and song used by a subgroup of Breslover Hasidim colloquially known as the Na Nachs. The complete phrase is Na Nach Nachma Nachman Me'uman. It is a kabbalistic formula based on the four Hebrew letters of the name Nachman, referring to the founder of the Breslov movement, Rebbe Nachman of Breslov, along with a reference to his burial place in Uman, Ukraine.

And then there is the matter of The Petek:


In 1922, Rabbi Yisroel Ber Odesser a Breslover Hasid, claimed to have received a petek (note) addressed to him from Rebbe Nachman, although the latter had died in 1810. The seventh line of this petek is signed Na Nach Nachma Nachman Meuman, which became Rabbi Odesser's personal meditation and song. Before he died, he taught this phrase to a group of devotees who formed the Na Nach movement.

How was The Petek revealed to Rabbi Odesser? 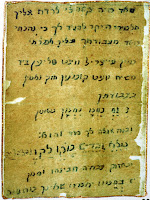 When he was 33 years old, Odesser was overcome with weakness and hunger on the Fast of Tammuz. He decided to eat. But immediately after eating, he felt great sorrow at having succumbed to his own physical temptations. After five continuous days of prayer, a powerful thought came to him: "Go into your room!"

He obeyed the inner voice, went to the bookcase, and randomly opened a book. In the book was a piece of paper that he would later call "The Letter from Heaven." The paper, written in Hebrew with one line in Yiddish, read as follows:

It was very difficult for me to come down to you

my precious student to tell you that I had pleasure
very much from your devotion and upon you I said
my fire will burn until
Messiah is coming be strong and courageous
in your devotion
Na Nach Nachma Nachman Meuman
And with this I will reveal to you a secret and it is:
Full and heaped up from one extreme to another extreme
And with the strengthening of your devotion
you will understand it and a sign
The 17th of Tammuz they will say that you don't fast

Odesser believed the letter to be a message of consolation, directly from Rebbe Nachman's spirit to himself here on earth. Since his name did not appear in the petek as the recipient, Odesser said that this was reason for every person to consider the petek addressed to himself or herself personally.

So what does this mean?  Rabbi Nachman himself never used the phrase Na Nach Nachma Nachman Meuman - but he did say that repeating one word over and over was an effective form of meditation.

Rabbi Nachman remains a powerful force in the Jewish world - more than 200 years after his death.  The Tales of Rabbi Nachman still hold us enthralled.  Even Abq Jew, a determined rationalist, is caught up in the exuberance.  Sing!  Dance!