Two Attacks Where We Live

At Home in New Mexico: How long has it been since Abq Jew saw the need to create a serious blog post about hate?

As it turns out (see El Paso: 'Do Something!'), it's only been ten-and-a-half months. Less than a year. Not nearly long enough.

Here we go again. There have been two incidents - that Abq Jew is aware of - that took place or affected us directly, here in the Land of Enchantment.


(Yes, there have been hate crimes and incidents elsewhere
... indeed, everywhere. But let's keep our focus.)

Abq Jew doesn't want to dwell on these incidents too much, or give them more importance than they deserve. But you, Abq Jew's loyal readers, should know that these things did happen. Right here. 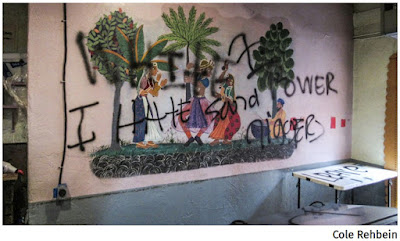 On Sunday night, the India Palace restaurant in Santa Fe was vandalized with White Supremacist messages. The physical and emotional damage was extensive, as Cole Rehbein of the Santa Fe Reporter wrote:

When Bajit Singh walked into his India Palace restaurant to prepare for a busy dinner service Monday afternoon, he found his restaurant destroyed and racial slurs graffitied all over the walls.

“I walked into the kitchen, I saw everything and I was like, hold on, what? What is going on here?” he tells SFR.

“White power,” “Trump 2020,” “go home,” and far worse were spray-painted on walls, doors, counters and any other available surface. Some phrases contained threats of violence and derogatory racial slurs.

Tables were overturned, glassware was smashed into piles on the floor. The wine racks were emptied, a statue of a goddess was beheaded and computers were stolen. Food warmers were turned over and destroyed. The front desk area was gutted, plates smashed and the kitchen rendered completely unusable.

The restaurant has only recently re-opened after being closed due to COVID-19 public health orders, and recent protests in downtown have made the area rife with conflict.

While specific perpetrators and motivations are yet unknown, the general cause is clear to Marcus Romero, family friend of the Singhs: 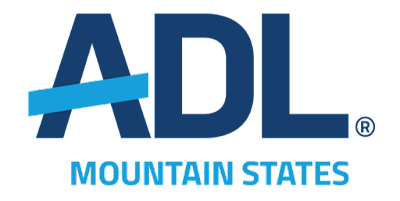 “We condemn the horrendous vandalism and vicious graffiti at India Palace restaurant and offer support and solidarity to the business owners,”

“We encourage the Santa Fe Police Department to investigate this incident as a hate crime and hope the guilt party or parties will be held accountable.”

While the motive for this hateful incident in Santa Fe is not yet known, ADL has been tracking an increase in anti-Asian hate crimes as the novel coronavirus pandemic continues and extremist activity at recent protests against police brutality and systemic racism. 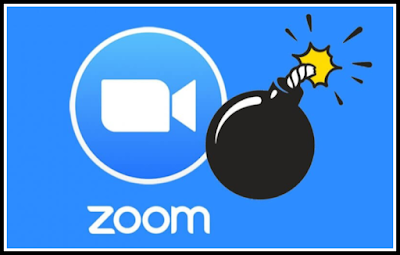 A New Mexico shul announced that during its online service last Shabbat, it experienced what is known as a "Zoom Bombing" attack - anti-Semitic, anti-Jewish, and Nazi messages from unknown persons who entered its Zoom channel suddenly and without warning. 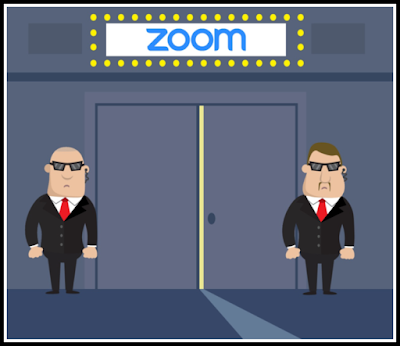 There is always the fear of what might come next. But fortunately, Zoom-bombing itself does not involve physical intimidation or damage. It's annoying and disruptive, but - by itself - poses no physical danger.

And there are some really low-tech (and some really high-tech) ways to help mitigate the risk.

Which is really a bummer, because we want to publicize our events AND make it easy for folks to attend them. Nevertheless, asking attendees to register first to receive the password will make Zoom-bombing just a bit more difficult.


It's probably the first thing to try.

If you are using Zoom links and
not using a password - stop that.

If you are using Zoom links and
publishing the password - stop that.

Jewish New Mexico's Community Calendar of Events & Classes (and, in this period of COVID-19, Other Stuff), powered by Abq Jew, will no longer publish "open" Zoom links (without passwords) or Zoom passwords.

But will continue to publish Register links and Zoom links that have passwords (but not, of course, the passwords themselves).