Remembering the Reichstag Fire: Abq Jew is extremely sorry to report that this week started off extremely badly, then got worse.

While the words and actions of former Vice President Joe Biden seemed to hit just the right notes of harmony and healing ... those of our current president seemed incredibly discordant and dangerous.


Protestors demonstrate, while bad actors - inside agitators, outside agitators, lowlifes, provocateurs, and the inevitable others - inflame and destroy.

Where will this end? Abq Jew offers a brief history lesson:


On February 27, 1933, the German parliament (Reichstag) building burned down due to arson.

The Nazi leadership and its German Nationalist coalition partners exploited the fire to persuade President Paul von Hindenburg that Communists were planning a violent uprising to derail Germany’s "national renewal." They claimed that emergency legislation was needed to prevent this.

Commonly known as the Reichstag Fire Decree, the resulting act “For the Protection of the People and State” abolished a number of constitutional protections and paved the way for Nazi dictatorship.

Is this where we are heading?

Protestors and bad actors. Protestors on one hand; bad actors - especially those pesky anarchists and antifas - on the other.


During Nationwide Protests, Politicians Resort to the “Outside Agitator” Trope

Three very different politicians made strikingly similar statements on Saturday, in response to protests erupting across the country in the wake of the police killing of George Floyd, in Minneapolis.

Jacob Frey, the Democratic mayor of Minneapolis, blamed the destruction in his city on people who are “not Minneapolis residents.” (He later walked the statement back.)

New York’s Mayor, Bill de Blasio, said that he had heard, from community leaders, “how resentful they were that people were coming in in many cases from outside the community and creating negativity and violence that did not represent their community.”

And William Barr, the U.S. Attorney General, threatened to prosecute anyone who crossed state lines “to incite or participate in violent protesting.” President Trump, in his tweets, picked up on both Frey’s and Barr’s statements, issuing threats.

The shared premise of these comments is that people have no right to act politically in a neighborhood, city, or state that is not their own.

The same is true, she says, for the country: the residents of the United States have a stake and a say in police regimes that exist across our country.

We have already seen—and will surely see more—reports of actual provocateurs in the streets of Minneapolis and other cities. Provocateurs are the parasites on the body of protest: they will always be there.

But blaming all violence and destruction on outsiders performs a sleight of hand.

Dividing protesters into two categories—interlopers on the one hand and peaceful protesters on the other—delegitimizes some of the protesters, eliding their presence and their actions.

It also preëmpts a key question:

Why would you expect protests against state-sanctioned racist murder to be peaceful?

Is this where we are heading?

Where will this end? Abq Jew offers another brief history lesson: 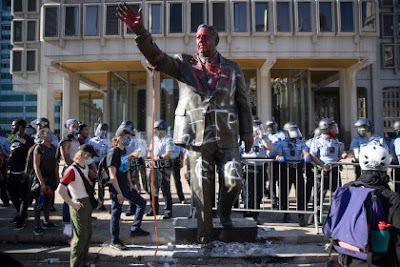 The Frank Rizzo statue, as embattled as the figure it commemorates, was removed in the early hours of Wednesday morning.

The perpetual protest magnet and 10-foot likeness of the late-1960s and 70s Philadelphia mayor and police commissioner was hoisted onto a truck, ending its stormy two-decade reign over a raised plaza facing City Hall.

During weekend demonstrations over the brutal death of George Floyd, the bronze 3,000-pound colossus was tagged with the word “facist” (misspelled, though the meaning was clear), bathed in crimson paint, attacked with hammers and eventually protected by a phalanx of city police, armed with truncheons, Rizzo’s accessory of choice.

He famously stuffed one down his tuxedo cummerbund to suggest that, while he could hobnob with swells, this avatar of brute force was never off-duty from the streets he ruled.

Don't remember much about Frank Rizzo? Here is what Wikipedia says, describing a confrontation between the black liberation group MOVE and the Philadelphia Police Department:


In 1985, another confrontation ended when a police helicopter dropped a bomb on the MOVE compound, a row house in the middle of the 6200 block of Osage Avenue.

The resulting fire killed eleven MOVE members, including five children, and destroyed 65 houses in the neighborhood. The survivors later filed a civil suit against the city and the police department, and were awarded $1.5 million in a 1996 settlement. 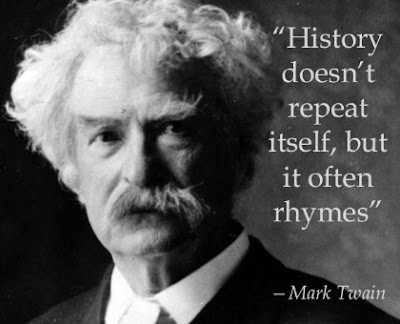 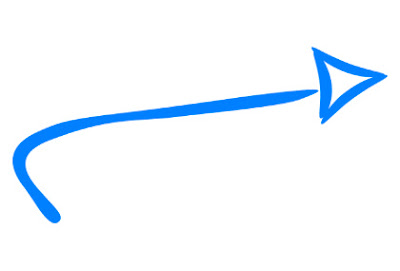 Helen Chernikoff reports in the Forward: 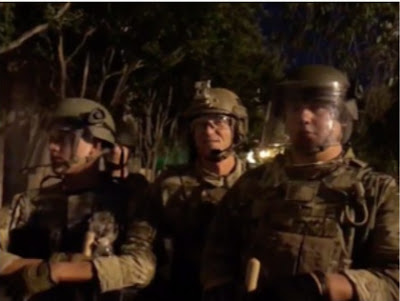 At the request of a National Guardsman from Utah, protestors sang a canonical Jewish plea for peace at protests outside the White House on Tuesday night, according to video from the scene.

“Shalom rav al Yisrael amcha, tasim l’olam,” sing multiple voices out of the frame, as three Guardsmen watch and one in particular grins throughout. “Grant abundant peace over your people Israel, forever,” the prayer beseeches God.

And then, there's this.

These are officers and protesters in Nebraska, coming together
and doing the Cupid Shuffle. This after law enforcement and
black leaders signed an agreement called
Hold Cops Accountable. 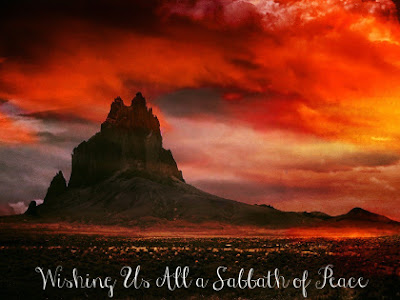