Let Our Joy Increase: Thank God it's Adar! When Adar arrives, our happiness goes way up. Which is good - because we can use all the happiness we can get, Ken O'Hara.


At the very hour Adar 5780 was sneaking in, Abq Jew had occasion to reread Jia Tolentino's delightfully dystopian homage to one of her favorite PBS programs.

Which is to say, it came up on Abq Jew's Facebook timeline - who knows how these things work? Oh ... it's from The New Yorker.


The Repressive, Authoritarian Soul of "Thomas the Tank Engine & Friends"

When I was a child, I could spend all day at Shining Time Station, the fictive train depot with its own eponymous TV show, where Thomas the Tank Engine and all his plate-faced locomotive friends worked and lived.

To my undeveloped brain, each episode seemed like a beautiful daydream, in which an orderly, magical, trance-inducing universe ticked on under bluebird skies.

For company, there was the Conductor, voiced first by Ringo Starr and later by George Carlin, and then the trains: gentle blue Edward, moody green Henry, big strong Gordon, little red James, and, of course, Thomas, with his pointed eyebrows and perpetual smile.

The show, which included segments that had first aired on a British show called “Thomas & Friends,” began airing on PBS in 1989, and each episode opened with a Joe Cocker-ish theme song: “Reach for the steam, reach for the whistle, go where the railway runs/ Reach for the words, reach for the story, follow the rainbow sun.”

I would hum along. How could I possibly have imagined that, decades later, I would get lost in obscure corners of the Internet where people interpret the show—at length—as a depiction of 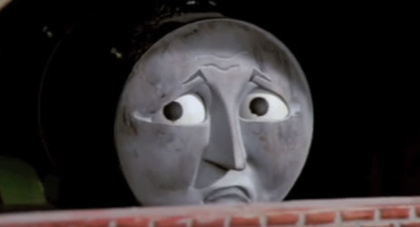 So let's talk about Henry.

If you have watched the series and not encountered such readings of it, you may assume that these interpretations are ridiculous.

In that case, you should spend four minutes with “The Sad Story of Henry,” a segment from “Thomas & Friends” that aired on the second episode of the first season at PBS. (In the U.S., it was retitled “Come Out, Henry!”)

It begins on a drizzly day in Sodor, the fictional island in the Irish Sea that serves as the show’s setting. Henry, the curmudgeonly train, is afraid to come out of his tunnel, because “the rain will ruin my lovely green paint and red stripes.”

Then Sir Topham Hatt, the railway director, who is also known as the Fat Controller, arrives on the scene. (He looks like Monopoly’s Rich Uncle Pennybags but with eyes that have almost surely witnessed murder.)

The Fat Controller orders the passengers to pull Henry out with a rope, but Henry won’t budge. They push him from the other direction, to no avail. (The Fat Controller declines to physically participate in this effort, citing “doctor’s orders.”)

The passengers then tell Henry that it’s not raining; Henry, perhaps noticing that everyone still has their umbrellas out, refuses to move.

Realizing that the day’s workflow is irrevocably disrupted, Fat Controller decides that Henry must be punished—for life.

“We shall take away your rails, and leave you here for always and always”

he tells Henry. As Henry’s face contorts into anguish and the background music toots a series of Oompa Loompa faux-glum flourishes, railway employees build a brick prison around Henry, leaving only half of his face visible. His train friends pass by: one snubs him, and another whistles hello. Henry has no steam left to whistle back.

He spends his days alone, soot-streaked, wondering if he’ll ever be allowed to go back to work. The last line of the segment is the narrator saying,

“I think he deserved his punishment, don’t you?” 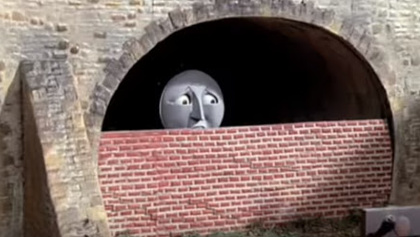 
Though “Shining Time Station” ended in the nineties, Thomas the Tank Engine shows have aired almost continuously since. “Thomas & Friends” has gone on in some form for twenty seasons, two of which featured Alec Baldwin as the narrator.

In 2009, the show went completely C.G.I. In 2014, the actor who had voiced Thomas for the previous five years quit, saying that the successful show was exploiting him by paying “a very low wage.”

The trains seem overdue for a similar revolution.

But we were talking about Adar, and the rapid approach of (almost) everyone's favorite holiday (and the only one on our calendar that will forever be celebrated, even in the Days of the Messiah) -


Which brings us to - were you there last Sunday, when the klezmer / world band Beyond the Pale performed at Las Placitas Presbyterian Church in (where else?) Placitas, as part of the Placitas Artists Series?


Abq Jew and a couple hundred of you were.
Wow, what a concert!

For over 20 years Toronto’s Beyond the Pale has been making its distinctive brand of boundary-busting Eurofolk fusion.

Inspired by Klezmer and Balkan styles but influenced by everything from jazz and classical music to bluegrass, newgrass and reggae, Beyond the Pale’s music traverses a vast and exotic musical landscape, bound by no particular idiom and shaped by many.

Their stellar musicianship, meticulous dynamics, adventurous compositions, and inventive arrangements of traditional material make them one of Canada’s most innovative acoustic ensembles.

Though individual virtuosity abounds within the group, the collective sound always takes precedence, conveying the deep and generous bonds of creativity that unite these longtime collaborators. 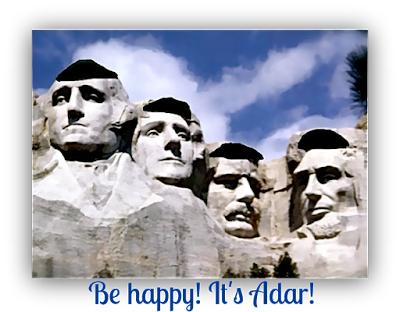