Herring and The Jews: Yes, Abq Jew promises you (Billy Nader) that we will get back to talking about DNA and family trees and all that stuff. But first, we've gotta talk about Jews and herring.


What is the connection between
Jews, herring, and Shabbos?

Abq Jew has the answer for you. Of course it is not Abq Jew's answer - he got it from someplace else! In this case, from the website for The Rebbe's Choice, purveyor of fine kosher herring products.


The B’nei Yissaschar, Rav Tzvi Elimelech of Dinov, taught that when HaShem created the world He only blessed three creations.

First up is when God blessed the fish; “God blessed them, saying, ‘Be fruitful and multiply, and fill the waters of the seas…” (Breishis 1:22).

The second blessing was bestowed upon mankind; “God blessed them (Adam and Chava). God said to them, ‘Be fruitful and multiply, and fill the earth!”(Breishis 1:28)

The third blessing was conferred on the worlds first Shabbos, with the words, “God blessed the seventh day and He declared it holy…” (Breishis 2:3)

So, says the B’nei Yissaschar, by you (blessing 2) eating fish (blessing 1) on Shabbos (blessing 3) you merit that all three blessings of creation are being actualized and fulfilled through you.

Furthermore, The Arizal wrote in the famous Azamer B’Shvochin sang customarily on Friday night, that fish are a delicacy on shabbos.

Basing himself on this, The Baal Shem Tov would serve fish at every Shabbos meal. Especially Shalosh Seudos.

And how, Abq Jew hears you, his loyal readers, ask, did Abq Jew discover said website for The Rebbe's Choice?

Abq Jew doesn't (big surprise) remember exactly, but at some point he passed through Larry Yudelson's May 2018 article in the Jewish Standard, Tales of the Chasidic Matjes. In which Mr Yudelson states:


There’s something fishy going on in the kosher herring business.

Two different herring companies are branding their gourmet delicacies with the names and visages of such rabbis as Menachem Mendel of Kotzk.


Yes, you can order the Honey Mustard Sriracha Herring from the Rebbe’s Choice line of premium certified kosher herring. “This sharp and fiery herring is inspired” by the “fiery truth and sharp wit of the rebbe of Kotzk,” according to the Rebbe’s Choice website.

Kotzk is only one of six herring flavors in the Rebbe’s Choice product line, which also includes such favorite chasidic masters as Rabbi Levi Yitzchak of Berditchev and Reb Zusha, available at kosher supermarkets, including Teaneck’s Cedar Market.

Want to eat herring and learn more? Let's start with - 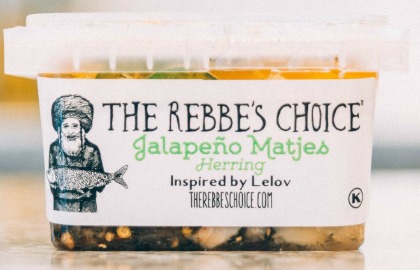 The first rebbe-herring company is (see above) The Rebbe's Choice.

Who says of its Jalapeno Matjes Herring, inspired by Lelov:


This flavorful herring was inspired by Lelov (Leh-Love). Rav Dovid of Lelov (1746-1814) was the first Rebbe of this holy Chassidus.

He was born in Biala, Poland and was a student of the great Chozeh M’Lublin. The Chozeh said about Rav Dovid:

“He is the foundation of all the tzaddikim and all the leaders of the Chasidic movement.”

Rav Dovid was famous for his love of all Jews, even the wicked ones, always finding ways of defending them. He used to say to his followers, “How can you claim that I am righteous, when I know that I still love my children and grandchildren more than I love my other fellow Jews?”

It once happened that his son fell seriously ill. Anxious for his welfare, the townsfolk assembled to pray for his recovery,  and spared no expense in hiring the most expert physicians. When in due time he recovered, they expected to see Their Rebbe, R’ Dovid, rejoicing, instead they found him weeping bitterly.

Rav Dovid said to them: “When my son fell ill, everyone was concerned; praying, and doing whatever was necessary until he was well. But if any other person is sick, no one makes a stir about it – people do not pay nearly that much attention to him. Now is that not something to weep over?”

Rav Dovid was well versed in the mystical aspects of the Torah and maintained a strong connection with his Rebbe regardless of the distance. Lelover Chassidus soon migrated from Poland to The Holy city Yerushalaim when Rav Dovids son, Rav Moshe of Lelov, moved there shortly before he himself passed away in 1851.

Even with the great esteem many had for Rav Dovid, others considered him an ignoramus.

But they only saw him on the surface, if they were to have truly appreciated the depth of Rav Dovid they would understand his great breadth of Torah knowledge.

Similarly, this herring has a deep flavorful presence that takes a discerning palette to truly grasp.

Want to eat more herring and learn even more? Let's continue with - 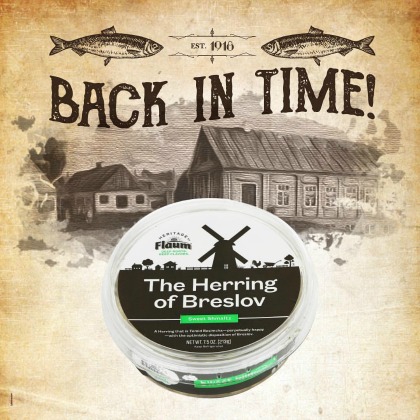 The second rebbe-herring company is (see above) Flaum.

KosherToday.com says of Flaum's The Herring of Breslov (et al):


Brooklyn…Herring is one of the comeback kosher foods of the 2000’s. Once thought to have been discarded into the dustbin of history, herring has emerged as a strong seller in the modern kosher food world, increasing annually by as much as 40%, according to some retailers.

Celebrating its 100th year, the famed Flaum’s brand which began as an appetizing store on Lee Avenue in Williamsburg has rolled out a series of herring products that are named after several legendary Eastern European Chasidic and Yeshiva movements such as Kotzk, Volozhin and Breslev, each known for their respective traits of sharpness, wit, and sweetness with the herring mimicking these virtues.

“Naming our herring products after the legendary movements of Chasidus and the Yeshiva movement puts these foods in a context of continuity and heritage.”

said Hershey Grunhut of Flaum’s. Indeed, historians point out that

Herring was a basic staple in the courtyards of the Chasidic movements.

Abq Jew is, of course, thrilled that a kosher herring product has been named for Rebbe Nachman of Breslov. Want proof? See Abq Jew's blog posts


The world has yet to taste what I have to offer.

Were they to hear just one of my teachings together with its proper melody and dance,

the incredible delight would bring everyone to a state of sheer ecstacy and total transcendence of self.

At the end of his life, as Rabbi Nachman was leaving Breslov for Uman where he knew he would soon die, he told his closest followers,


My fire will burn until the coming of the Messiah.

Hi, Naftali from The Rebbe's Choice here, loved the article! Thank you so much for posting!!