Morgans By the Hundredths: People often ask Abq Jew how he manages to use DNA to find so many long-lost relatives on his Family Tree.


Actually, almost nobody asks. That's because Abq Jew has (so far) only used DNA genealogy to confirm the identities of long-lost relatives who already appear on his Family Tree.

This is very different from using DNA genealogy to find long-lost relatives who do not appear on Abq Jew's Family Tree.

But just in case someone should ask sometime, Abq Jew offers this wonderfully interesting and entertaining Not Strictly DNA Genealogy Methodology. 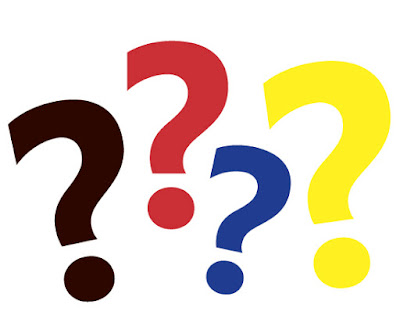 Who Are Those Guys?
A Not Strictly DNA Genealogy Methodology
You've Got DNA Matches!

Which, as it turns out, seems to involve Four Questions.

1. What are we looking for?

This one is easy. What we're looking for is shared DNA. That is, snippets of our own DNA that match snippets of a prospective relative's DNA, which we both probably inherited from a Most Recent Common Ancestor (MRCA).

This one is also easy. Just spit or swab, then send in the kit. To MyHeritage, to FamilyTree DNA, to Ancestry, to 23andMe, or to any appropriate, efficient, and trustworthy DNA testing service out there in the world.

Let the fun begin! After some period of time (potentially weeks), you will receive your results from your DNA testing service.

Chances are, the results will begin with the DNA testing service's best estimate of your ethnic ancestry. 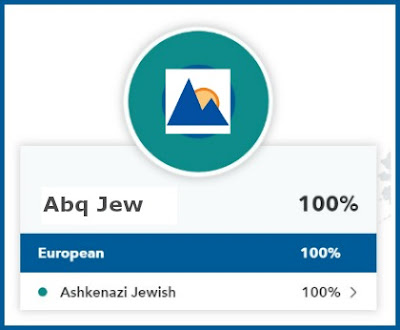 And chances are your results will look a lot like Abq Jew's. Maybe not 100% Ashkenazi Jewish, but a lot. That's going to create a problem down the road.

But then, the results will turn to what you're really after - DNA matches. Here's where centiMorgans and percentages come in. 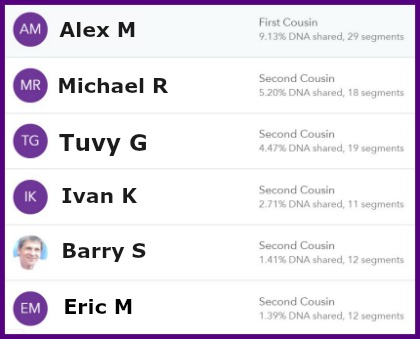 Here is what the first group of Abq Jew's DNA matches looks like. We've got

The percentage of DNA is based upon centiMorgans, which is a much more complicated and technical measure of how close a relative is this?

But the rule is: 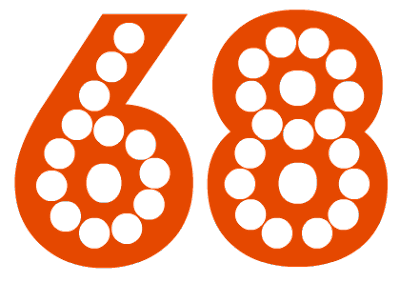 The more centiMorgans, the higher the percentage,
the closer the relationship.

You will also be thrilled to learn that the term ‘centiMorgan’ was coined by Alfred Henry Sturtevant in honor of his teacher, Thomas Hunt Morgan, a famous American geneticist. The original unit was called a Morgan, but is rarely used today.

But back to the drawing board. 23andMe compared Abq Jew's DNA to the DNA of others in its database, and came up with 1,121 possible relatives - of whom, six are shown.

Let's go to the videotape! Here is a standard chart that shows how %DNA shared and #centiMorgans correlate with real-life relationships. 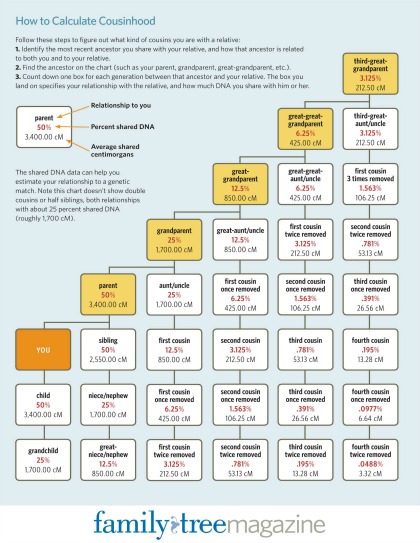 This chart, you might say, puts Barry S and Eric M in (approximately, of course) Abq Jew's Second Cousin Once Removed (2C1R) or First Cousin Twice Removed (1C2R) range. Except for one thing (see above): 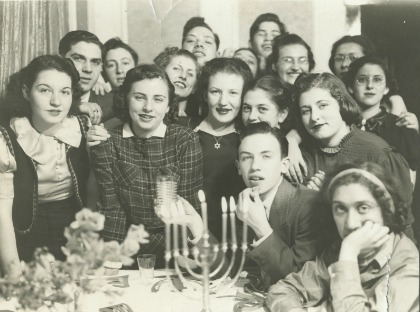 We're all Jews. Or descended from Jews.

Which, of course, raises the question that Jews have been asking each other since time immemorial.

4. Why is this harder for Jews?

You would think it would be easy, right? Just spit or swab, send in the kit, wait a few weeks, and viola (or other stringed instrument)! You've got mishpocha!

Well, Abq Jew must tell you: It ain't that easy.

To answer this ageless question more fully, please allow Abq Jew to introduce you to

Who in May 2017 published the seminal (no pun intended) article -

No, You Don't Really Have 7,900 4th
Cousins: Some DNA Basics for Those
With Jewish Heritage

In which she clearly explains the reasons why Jewish DNA genealogy is so hard, among which is


It's not as bad as it sounds.

If you are expecting that your DNA test will create a clear-cut breadcrumb trail taking your family tree back to the days of King David, think again.

For genetic purposes, Jews are what’s known as an “endogamous” population.

We stayed in a relatively limited geographical area and typically married only within our own culture — and not infrequently within our own families. (A 2014 study suggested that all Ashkenazi Jews alive today trace back to the same 330 people. Try fitting all those “relatives” at your seder table.)

Endogamy means that Jews share much more DNA with each other than average, which grossly inflates our relationship predictions.

You might quite literally have thousands and thousands of people listed as being “4th cousins or closer;” my first cousin has almost 8,000 Ancestry DNA matches. But that doesn’t mean those people are actually related to you in the way we typically think of relatives.

Virtually every Jewish person of the dozen or so I’ve DNA tested shares enough DNA to suggest that they are a “cousin” to every other Jewish person I’ve tested, regardless of whether those people are actually supposed to be blood related.

All of which means that

Jews can’t really go by the charts when it comes to anything past second cousins or so. 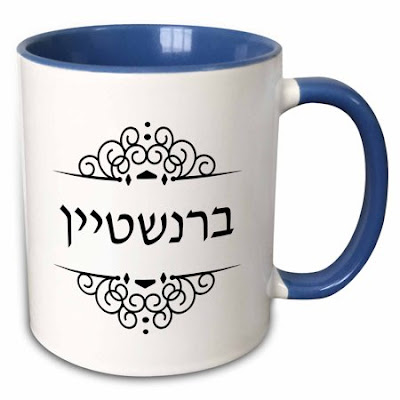 I hear all too often that people look at their DNA matches and are disappointed. “I don’t think it really works,” they say with a shrug. “I don’t recognize a single name on that list.”

For the vast majority of American Jews, that’s exceedingly rare. 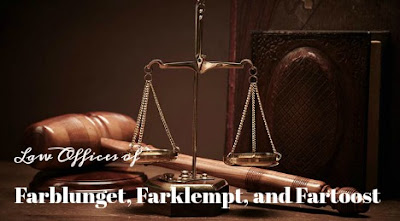 So where were we?

As Butch Cassidy might have asked (in a slightly different context) -

The real question is:

Is it worth Abq Jew's time to try
and find out who Barry S and Eric M are?

Or - although they appear close - are Barry S and Eric M actually so far away on Abq Jew's Tree that they may never be discovered? 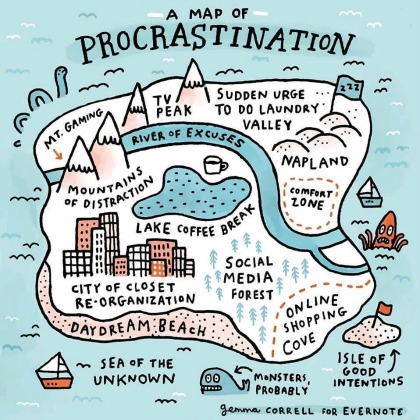 Why not? Here is what Ms Mendelsohn recommends:

For Jewish matches, anyone with whom your total cM shared is close to or over 200–250 cM [2.9-3.7%] is definitely worth contacting; that’s almost certain evidence of a traceable family relationship. (But keep in mind: DNA pulls back the veil on a lot of secrets, so it may not necessarily be a relationship you knew about.)

But most of the Jewish kits I manage have hundreds if not thousands of people in the 100–150 total cM [1.4-2.2%] range, most of whom are suggested to be second to fourth cousins. So how do you separate the faux cousins from the ones you should invite to your son’s bar mitzvah?

Well, for starters, look for anyone with a total greater than 100 cM [1.4%] AND a longest block at least 25 to 30 cM; then open the chromosome browser ... to do a one-to-one comparison, which shows a list, by chromosome, of all the segments you share.

If there are multiple long segments — one or two over 20–30 cM and several others over 10 cM — you just might be in business. If all you see are a handful of smaller segments, none even close to 20, you may not find your connection in this lifetime. 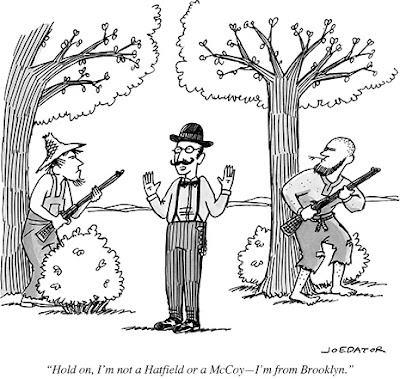 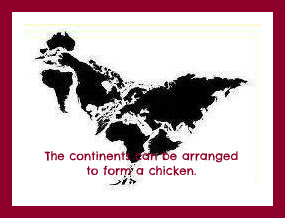 The article you have shared here is great. I read your post with carefully, the points you mentioned can be very helpful. It is nice seeing your wonderful post.