Rabbi Nachman & Franz Kafka:  In 1990, Tibet's Buddhist leader, the Dalai Lama, invited eight Jewish delegates to Dharamsala, India, to ask them, "What is the secret of Jewish spiritual survival in exile?"

Rodger Kamenetz is the author of The Jew In The Lotus, the acclaimed account of that meeting - as well as several other works of poetry and prose.  Abq Jew is happy to report that Kamenetz, recently retired from his position as LSU Distinguished Professor and Sternberg Honors Chair Professor, has recently written yet another thoughtful, provocative, intelligent book. 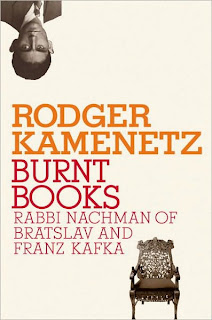 Burnt Books is about two of the most celebrated mystical masters and storytellers of our time: Rabbi Nachman of Bratslav (1772-1810) and Franz Kafka (1883-1924).

In the Introduction to Burnt Books, Kamenetz writes:


I find a clue in something the scholar Gershom Scholem once said. To understand kabbalah in our time, first we would have to read Franz Kafka.

Separated by more than a century of political, social, and, most importantly, religious upheaval - what unites these two?  Kamanetz answers:


Both died of tuberculosis, tragically young.
And each, at the very end, asked a close friend to burn his books.


These two men are also united by fire.  At the very beginning of his real life in writing ... Kafka discovered within him a "great fire" and he never forgot it.  At the end of his life, as Rabbi Nachman was leaving Breslov for Uman where he knew he would soon die, he told his closest followers, "My fire will burn until the coming of the Messiah."


Many years ago, Abq Jew acquired Arnold Band's Nahman of Bratslav: The Tales, still considered one of the best translations available.  He has read and reread The Tales many times since then - and still does not understand them.

Is each tale an allegory? Is each character a symbol, each action a metaphor?  Abq Jew has come to the conclusion that - The Tales must be taken simply, even though these are not simple tales. Too much should not be read into them.  But one can never read too much into them.

And Kafka? These days, everyone knows Kafka - he is all around us; we live with him. As Kafka writes in his parable Before the Law:


Before the Law stands a doorkeeper.  A man from the country comes to the doorkeeper and requests admittance to the Law.  But the doorkeeper says that he can't grant him admittance now.  The man thinks it over and then asks if he'll be allowed to enter later.  "It's possible," says the doorkeeper, "but not now."


"Everyone strives to reach the Law," says the man.  "How does it happen, then, that in all these many years no one but me has requested admittance?"  The doorkeeper sees that the man is nearing his end, and ... roars at him, "No one else could gain admission here, because this entrance was meant solely for you.  I'm going to shut it now."

Yes, we know Kafka.  And when will our waiting end?  Kafka once said:

When will that day be?  Rabbi Nachman tells us in The Seven Beggars, his final and most renowned tale: When the seventh beggar, the legless dancer, appears at the Wedding Feast.

And not until then.