Under The Big "W":  For some reason known to very few, Abq Jew and family receive their very own copy of Architectural Digest magazine every month.

This month, in  addition to one feature about Will & Jada Pinkett Smith's ginormous house and another feature about a 25,000 square foot home with three bedrooms and six-and-a-half bathrooms (how many bathrooms can one person use at a time?), AD has an article about the innovative designs of  Bjark Ingels, an "upstart Dane with global commissions galore" who "thinks very far outside the box."

Abq Jew is - surprise! - a big fan of thinking outside the box.  In fact, Abq Jew is one of the cognoscenti (you can be one, too!) who knows where the phrase "outside the box" comes from.  Hint: it has nothing to  do with potty-training cats. Or elephants.

Anyway, here is a rendering (not a photo! not built yet!) of one of Ingels' designs: a prize-winning housing proposal for Prague.  Do you see the box?  No, Abq Jew didn't think so.  Ingels has left the box far, far behind. 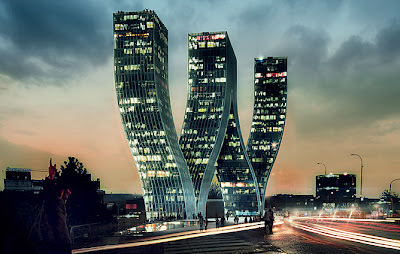 When he saw this ... picture, and found out that this ... structure is to be built in the mystically Jewish city of Prague, Abq Jew's first reaction was: Of course!  It's

But Abq Jew has since recanted.  Upon further reflection, it is clear that this ... apartment house (who could live here? how could they sleep at night?) is, in fact,

For those of you below a certain age: IMDB helpfully provides this synopsis of  It's A Mad, Mad, Mad, Mad World, the 1963 screwball comedy (with a list of characters and cameos 200 miles long):


Somewhere in the desert. A car speeds like crazy along the roads. Suddenly, the driver loses control and sails off a cliff. Four other vehicles are near, they stop to help. The dying man narrates the drivers of a fortune in cash, $350,000, which he has hidden below a giant "W" in Santa Rosita, some 200 miles away. The four drivers and their respective passengers can't decide on how to share the future fortune, and suddenly a wild race to Santa Rosita develops. While one party manages to rent a plane (from 1916), the others face different problems like tire damage, untrustworthy lifts, deep water, drunken millionaires, a British adventurer, little girl's bicycles, and last but far not least a mother-in-law from hell and her imbecile son. While the folks slowly travel towards the goal, they are being watched. Who ever said that nobody else knew about the fortune?

To help refresh your memory (which, if you are above a certain age, may not need refreshing; Abq Jew can still sing - and has, at Passover seders - all the words of the entire [UC Davis] Cal Aggie Drinking Song he learned in ... well, a few years ago, but where are the car keys he just put right here 15 minutes ago?), here is a (not the) trailer for the movie:


Did ya see the way he just sailed out there?