O Come On - Goats? This has been a painful week here in Albuquerque, for indeed, this has been the week of


Abq Jew has tried to do his part in reducing tensions. He posted One Giving Tree - which called for Peace, Love, Understanding - and Respect. But he has otherwise tried to avoid comment on the situation.

At 1:38 this morning (don't ask), Abq Jew was reading Slate magazine on his tablet when he came across the perfect response to all the mishegos (that's a technical term) that has smogged up the atmosphere this past week.

And yes - it involves goats.


Finally, You Can Hear All Your Holiday Favorites Performed by Goats

“When it’s cold outside and the darkness of winter prevails, the Christmas goat invites us all to an emotional moment by the fireplace.” Everyone knows the Christmas goat, right? ActionAid Sweden certainly thinks so, judging by their video advertising All I Want for Christmas Is a Goat, a new holiday album that features classic songs like “Jingle Bells,” “Silent Night,” and “Rudolph the Red-Nosed Reindeer” sung by goats. The album was created to celebrate goats—not only are they cute, they also play a crucial role in fighting poverty. The album is available on iTunes and Spotify, and proceeds will go toward ActionAid. 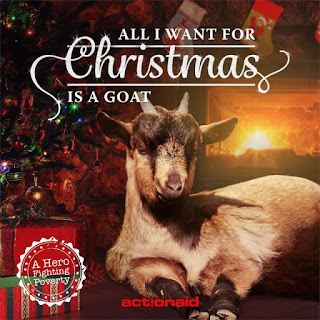 Both Mariah Carey and these talented livestock hit high notes with equal verve. If you’re going to listen to the same tired holiday songs year after year, there’s nothing like screaming goats to freshen things up.

Let's begin with Jingle Bells, a largely non-denominational song about which Wikipedia says


"Jingle Bells" is one of the best-known and commonly sung American Christmas songs in the world. It was written by James Lord Pierpont (1822–1893) and published under the title "One Horse Open Sleigh" in the autumn of 1857.

Even though it is now associated with the Christmas and holiday season, it was actually originally written for American Thanksgiving.

And, Abq Jew must point out, the tune can easily be applied to Adon Olam.


For something considerably more serious, let's turn to O Come, All Ye Faithful, a strongly denominational song about which Wikipedia says


"O Come, All Ye Faithful" (originally written in Latin as Adeste Fideles) is a Christmas carol which has been attributed to various authors, including John Francis Wade (1711–1786), with the earliest copies of the hymn all bearing his signature, John Reading (1645–1692) and King John IV of Portugal (1604–1656).

Besides John Francis Wade, the tune has been purported to be written by several musicians, from John Reading and his son to Handel and even Gluck, including the Portuguese composers Marcos Portugal or the king John IV of Portugal himself. Thomas Arne, whom Wade knew, is another possible composer.

There are several similar musical themes written around that time, though it can be hard to determine whether these were written in imitation of the hymn, the hymn was based on them, or they are totally unconnected.

The original text has been from time to time attributed to various groups and individuals, including St. Bonaventure in the 13th century or King John IV of Portugal in the 17th, though it was more commonly believed that the text was written by an order of monks, the Cistercian, German, Portuguese and Spanish orders having, at various times, been given credit.

Here, Abq Jew must point out that this is one of those songs (see One Giving Tree) where - when he had to sing Christmas songs in class when growing up on Long Island - he mouthed, but never pronounced the verse "Christ the Lord."

And, Abq Jew must point out, they sing this much more forcefully at Westminster Abbey. And the organ! Oy! What a sound!

Let's conclude with the greatest Jewish Christmas song ever written - White Christmas. About which Wikipedia tells us

"White Christmas" is an Irving Berlin song reminiscing about an old-fashioned Christmas setting. According to the Guinness World Records, the version sung by Bing Crosby is the best-selling single of all time, with estimated sales in excess of 100 million copies worldwide. Other versions of the song, along with Bing Crosby's, have sold over 150 million copies.

Accounts vary as to when and where Berlin wrote the song. One story is that he wrote it in 1940, in warm La Quinta, California, while staying at the La Quinta Hotel, a frequent Hollywood retreat also favored by writer-director-producer Frank Capra, although the Arizona Biltmore also claims the song was written there.

Here, Abq Jew must point out that this song made Christmas a holiday about snow. Along with Easter Parade, Happy Holiday, and of course, God Bless America, Irving Berlin helped make it possible for Jews to live as full and equal citizens in America.

And, Abq Jew must point out, the tune can easily be applied to Adon Olam. 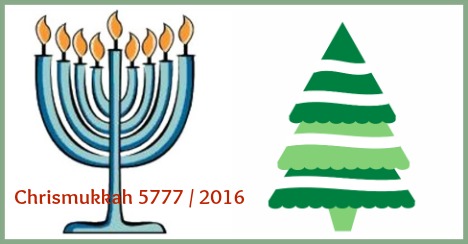 Abq Jew is excited to announce (see the Abq Jewish Event Calendar) that next year - 5777 or 2016, depending on how you count - Albuquerque and New Mexico will join the world in celebrating Chrismukkah. Which is to say

The first night of Hanukkah will fall on Christmas Eve.
Let's start getting ready now.

Abq Jew sincerely wishes his Christian friends a happy and meaningful Christmas. And to his Jewish friends (even though it's only Wednesday), Abq Jew says

We are so relieved that the Xmas tune, Little Drummer Boy was not alluded to. Or even mentioned. In our opinion, a person could get off a charge of aggravated assault, or murder even on the grounds of having heard that whiny dreadful tune one time too many. Even if it was performed by the Ukrainian Goat Chorus.