And More Goats: This week, the Israel Antiquities Authority announced, a mysterious golden object had been found in a Jerusalem cemetery.


Here is a condensed version of the full story:


"To tell you the truth I've never seen anything like this before," Amir Ganor, head the authority's robbery prevention unit, told NBC News.

The mystery object was found six months ago by a maintenance worker who noticed something glittering in the grounds of a Jerusalem cemetery.

The burial grounds are "actually an important archaeology site where remains were found dating to the Roman, Byzantine and Crusader periods," Ganor explained.

Ganor joked that he thought "that aliens landed from outer space and brought the object."

Oh, what could this mysterious golden object be?


In the end, an Italian man named Micah Barak was credited with solving the mystery.

The antiquities authority said Barak had identified the object as something which seeks to provide energy protection and "is intended for the use of naturopaths and people dealing with energy healing."

"The object, which is produced by a German company, is called 'Isis Beamer' after the Egyptian goddess Isis," they said.

"In Egyptian mythology she was the goddess of medicine, magic and nature," the authority added in a Facebook post confirming the answer had been found.

In other exciting and good news: New Mexico's own Diane Joy Schmidt's recent introspective The Merkabah and the Exegesis of a License Plate, originally published in the New Mexico Jewish eLink, was picked up by none other than The Blogs of The Times of Israel!

If you don't know Diane - you should.

She grew up on Chicago's North Shore in the traditions of Reform Judaism, is anchored by her memories of the fireflies at Union Institute camp and the Big Dipper over Lake Michigan, and is an admirer of all things spiritually resonant.

In other exciting and strange news: New Mexico's own Susana Martinez - the first woman to be elected Governor of New Mexico and the first Hispanic female governor in the United States - was captured on audio in an encounter involving the front desk of the Eldorado Hotel and Spa, the Santa Fe Police, and ... pizza.


So let's talk some more about goats (see also All Ye Faithful).

Starting with the You Can Dance (Theme: Gratitude) segment of Jewish Food for Thought. Please (please!) allow Abq Jew to explain:

Jewish Food For Thought: The Animated Series, written and animated by Hanan Harchol, is a collection of animated shorts that teach Jewish ethics to adults and teens using thought provoking and funny conversations between animated versions of Hanan and his Israeli parents.

Each episode focuses on a particular theme such as forgiveness, love, or gratitude, distilling major Jewish teachings on that theme into engaging conversation. The series offers a fresh approach to accessing and applying thousands of years of Jewish wisdom to contemporary life.

Each episode has an accompanying downloadable study guide, written by Rabbi Leora Kaye, that may be used to facilitate continued conversation and study after watching an episode.

So here's Gratitude for you -


Want even more goats (see also All Ye Faithful)? Here's Rudolph! About which Wikipedia tells us


Rudolph first appeared in a 1939 booklet written by Robert L. May and published by Montgomery Ward.

The story is owned by The Rudolph Company, LP and has been adapted in numerous forms including a popular song, a television special and sequels, and a feature film and sequel. Character Arts, LLC manages the licensing for the Rudolph Company, LP. In many countries, Rudolph has become a figure of Christmas folklore. 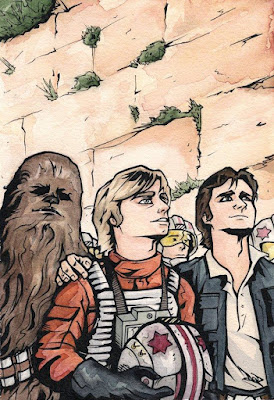