Scarlett and the Three Sylvesters

Which is Which: Do you get your Scarlett mixed up with your Sylvesters? Abq Jew recently had the pleasure of watching the 2011 movie We Bought A Zoo, in which the lovely and talented and Jewish Scarlett Johansson (and Matt Damon) star.


Scarlett Johansson, as you, Abq Jew's loyal readers, may have guessed, has nothing to do with this blog post. But to get Facebook and Twitter perusers to click, one Scarlett is worth three Sylvesters. If not more.


Do you get your Sylvesters mixed up? Here is Abq Jew's Sylvester Guide, just in case. Why does Abq Jew care? More on that later.

Sylvester #1 (on the left) is Sylvester Stallone. Wikipedia tells us:


Sylvester (Gardenzio "Sly" Stallone; born July 6, 1946) is an American actor, screenwriter, producer, and director. He is well known for his Hollywood action roles, particularly boxer Rocky Balboa, the title character of the Rocky series' seven films from 1976 to 2015 ....

Stallone's film Rocky was inducted into the National Film Registry as well as having its film props placed in the Smithsonian Museum. Stallone's use of the front entrance to the Philadelphia Museum of Art in the Rocky series led the area to be nicknamed the Rocky Steps. Philadelphia has a statue of his Rocky character placed permanently near the museum. It was announced on December 7, 2010 that Stallone was voted into boxing's Hall of Fame.

In 1977, Stallone was nominated for two Academy Awards for Rocky, Best Original Screenplay and Best Actor. He became the third man in history to receive these two nominations for the same film, after Charles Chaplin and Orson Welles. He received critical raves, and his third Golden Globe nomination, for reprising the role of Rocky Balboa in Ryan Coogler's Creed.

Sylvester #2 (in the center) is Sylvester the Cat. Wikipedia tells us:

The name "Sylvester" is a play on Felis silvestris, the scientific name for the wild cat species (domestic cats like Sylvester, though, are actually Felis catus).

The character debuted in Friz Freleng's Life With Feathers (1945). Freleng's 1947 cartoon Tweetie Pie was the first pairing of Tweety with Sylvester, and the Bob Clampett-directed Kitty Kornered (1946) was Sylvester's first pairing with Porky Pig.

Sylvester appeared in 103 cartoons in the golden age. He appeared fourth most frequently in films behind Bugs Bunny, Porky Pig, and Daffy Duck respectively.

Three of his cartoons won Academy Awards, the most for any starring Looney Tunes character: they are Tweetie Pie, Speedy Gonzales, and Birds Anonymous.

Sylvester #3 (on the right) is Pope Sylvester I. Wikipedia tells us:

During his pontificate, the great churches founded at Rome by Constantine, e.g. the Basilica of St. John Lateran, Santa Croce in Gerusalemme, Old St. Peter's Basilica, and several cemeterial churches, were built over the graves of martyrs.

Sylvester did not attend the First Council of Nicaea in 325,

Abq Jew grew up with Sylvester #1 and Sylvester #2. Sylvester #3 - not so much. At least, not until Abq Jew spent his first December 31st in the Land of Israel, where the Day (and the Eve) are celebrated as ... Sylvester. 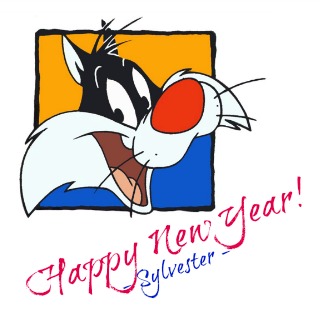 Why? Abq Jew hears you ask. And our friends at Aish.com explain:


In 46 BCE the Roman emperor Julius Caesar made adjustments to the Roman calendar, including beginning the new year on January 1 rather than in March. (He egocentrically decreed that the calendar should henceforth be called the "Julian" calendar.)

In practical terms, all cultures celebrate the new year according to their particular calendar and the Romans were no different. When the Roman Empire became the Holy Roman Empire under Constantine, at his mother Helena's behest, the Christian world carried on the custom of celebrating the Roman new year.

In many European countries this day was named after Saint Sylvester. There have been three popes named Sylvester (who later became Saints), but the one after whom the day is named is Sylvester I (314-335). Christianity grew under his rule and it is believed that he died on December 31.

In addition, during his rule it was believed that he had been swallowed by the Leviathan sea monster and that the monster would return in the year 1000 to destroy and kill. When it did not, people were relieved and they celebrated.

As you see, there is nothing remotely Jewish about "Sylvester Day." So why is it celebrated in Israel?

Israeli society flows according to the Jewish calendar. Schools and businesses are closed on Shabbat, and the whole country shuts down on Jewish holidays like Yom Kippur. For that reason the secular/Christian new year has little significance.

Yet when some ultra-secularists discovered that most of the world holds a "New Years party," they didn't want to feel left out.

Yet they couldn't call it "New Years" because that title was already taken by Rosh Hashana. So the name Sylvester was adopted in its stead.

And Abq Jew hears you ask:


How many New Years
do Jews traditionally observe?

The answer, it turns out, is (traditionally) four (4). My Jewish Learning explains that the four Jewish new years specified in Mishnah Rosh Hashanah 1:1 are 1 Tishri, 15 Shevat, 1 Nisan, and 1 Elul.
Here in the US of A, we Jews have added a fifth New Year:


If you're planning to stay up late - Abq Jew wishes you Good Morning! and Happy 2016! in advance.