Klezmer! Nahalat Shalom! Presidents Day Weekend!  Yes, Abq Jew has mentioned this before. But here we go once again, now that this year's very successful A Taste of Honey has come and gone: 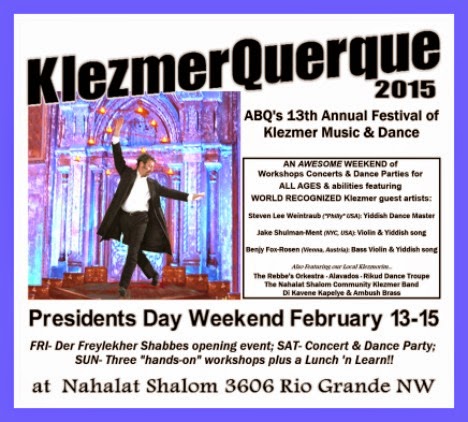 Here is the plan:

The 13th Annual KlezmerQuerque is a three-day festival of concerts, workshops and dance parties featuring ‘Klezmer’ which is the traditional dance and instrumental music based in the ancient wedding ceremonies of the Eastern European Jewish people.

The festival will take place from February 13-15, 2015 (Friday evening through Sunday evening) over Presidents Day weekend.

KlezmerQuerque is produced by Congregation Nahalat Shalom, its 26-piece inter-generational Community Klezmer Band and Rikud Yiddish dance troupe. The festival presents a wide variety of events for all ages and abilities with prices ranging from free to $20 per event.


Highlights of the festival include
See you there!