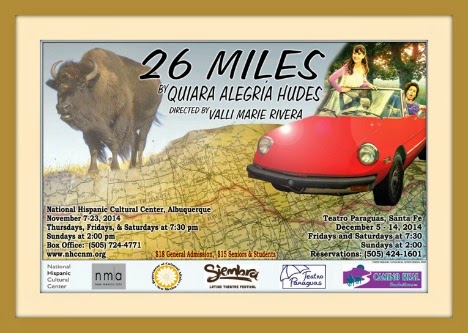 Beatriz and Olivia are another pair of seekers seduced by the prospect of a getaway.

Their midnight departure may start out as a desperate move by Beatriz to remove Olivia, her 15-year-old-daughter, from the care of her conflicted father and his indifferent new wife. It may give Beatriz a break from her philandering husband, Manuel.

By the end of the charming, spunky and ultimately heart-rending play, however, the car trip from Paoli, PA, to Yellowstone Park is transformative and restorative for both mother and daughter.

Playwright Quiara Alegría Hudes received the 2012 Pulitzer Prize for Water by the Spoonful; a previous play, Elliot, A Soldier's Fugue, was a Pulitzer finalist.

Hudes was born in Philadelphia, Pennsylvania, to a Jewish father and a Puerto Rican mother. They raised her in West Philadelphia, where she began composing music and writing.

She has stated that although she is of "Puerto Rican and Jewish blood", she was "raised by two Puerto Rican parents". Her step-father was a Puerto Rican entrepreneur.

She graduated from Central High School. She studied music composition at Yale University, where she earned her BA, and playwriting at Brown University, earning an MFA.

Camino Real Productions, LLC is an Albuquerque-based theatrical and radio theatre production company founded by Linda López McAlister in 2006. It is one of the theatre companies in residence at the National Hispanic Cultural Center, a division of the Department of Cultural Affairs, dedicated to the promotion and preservation of Hispanic art and culture at the local, state, national, and international levels.