We Can Stop Now: The Times of Israel cheerfully reports that the Chief Rabbinate says we can stop praying for rain now.


You can stop praying for rain now, rabbinate says
As heavens open, Jews now encouraged to say prayer of thanks for the deluge

Here is a picture - snow in Jerusalem! - that might just possibly explain the Chief Rabbinate's change of heart. 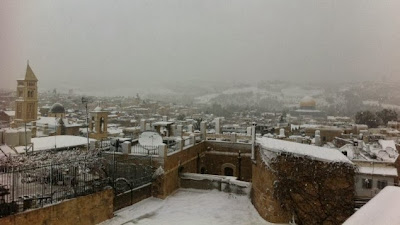 And the Times of Israel continues:


Now that Israel’s winter has begun in earnest, with a major storm and snow Wednesday and Thursday, Jews around the world should stop saying the special prayer for rain they were asked to utter last week, the Chief Rabbinate said.

This early winter was one of the driest on record, even by the parched standards of the region, and so last Wednesday, December 4, Israel’s chief rabbis asked Jews worldwide to insert an additional traditional prayer for rain into their daily supplications and to recite specific psalms.
Soon after the rabbis’ prayer request was made, meteorological data indicated that rain was headed to Israel.

Since its arrival, the rabbis have asked the public to cease saying the extra prayer, and instead to insert a thanksgiving prayer for rain — a prayer that is “a little modern, from around 400 years ago,” Chief Rabbinate spokesman Ziv Maor told The Times of Israel on Thursday.

A planned prayer rally at the Western Wall, called for last Thursday, was called off because it was already clear that the rains were imminent, he added. The first major rain of the winter struck the country that same day.

This Wednesday-Thursday has seen Israel in the grip of a rain-, wind- and snowstorm that was expected to last through the weekend. Schools were closed and public transportation disrupted Thursday as snow fell on Mount Hermon, the Golan Heights, Safed, and Jerusalem and its surrounding higher-altitude areas. Today (Friday December 13) is also the Tenth of Tevet, a bad day for Jerusalem and for Jews everywhere. On that day, in the year 588 BCE, the armies of the Babylonian emperor Nebuchadnezzar laid siege to Jerusalem.

Thirty months later - on the Ninth of Tammuz - the city walls were breached, and on the following Ninth of Av (in 586 BCE) the Holy Temple was destroyed. The Jewish people were exiled to Babylonia for 70 years.

This means, incidentally, that Rosh Hashanah can only fall on a Monday, Tuesday, Thursday, or Shabbat. (This year, 5774 - a leap year, by the way - Rosh Hashanah fell on a Thursday.)

And how, Abq Jew hears you ask, can one determine whether or not a particular year is a leap year?

Fascinating, eh what? So, how does one fast all day (sunup to sundown) Friday and then make Shabbat? Chabad tells us:


We refrain from food and drink from daybreak to nightfall, and add selichot and other special supplements to our prayers. The fast ends at nightfall or as soon as you see three medium sized stars in the sky. Recite the Friday night Kiddush, then break your fast.


On the Eighth of Tevet one year during the 200s BCE, a time of Hellenistic rule of Judea during the Second Temple period, Ptolemy, King of Egypt, ordered the translation of the Hebrew Bible into Greek, a work which later became known as the Septuagint.

Seventy two sages were placed in solitary confinement and ordered to translate the Torah into Greek. The expected outcome would be a multitude of different translations that would then be compared and critiqued by the Greeks as there were some sentences in the Bible that could be understood as offensive to pagans if taken wrongly and would obviously need to be changed. This would demonstrate the muddled meanings of the Torah and the divergent opinions of Jewish interpreters. However, all seventy-two sages independently made identical translations into Greek.

The Greeks saw this as a most impressive feat. However, various rabbinical sources see this event as a tragedy, a debasement of the divine nature of the Torah, and a subversion of its spiritual qualities. They reasoned that upon translation from the original Hebrew, the Torah's legal codes & deeper layers of meaning would be lost.

And on the Ninth of Tevet, the Shulchan Aruch tells us that  "something happened, but we do not know what it was..."


The selichot liturgy for the day states that Ezra the Scribe, the great leader who brought some Jews back to the Holy Land from the Babylonian exile and who ushered in the era of the Second Temple, died on this day ... But according to the earlier sources ... the specific tragedy of the Ninth of Tevet is unknown.

Not to wander too far off the subject, but the Babylonian Exile turned out to be a formative and transformative experience for the Jewish People. Many of our texts, laws, and customs were established in that period. And we acquired several of our month names - Nisan, Iyyar, Tammuz, Ab, Elul, Tishri, and Adar - from Babylonia.

Anyway ... doesn't look like much of a chance for precip here in Albuquerque this weekend. 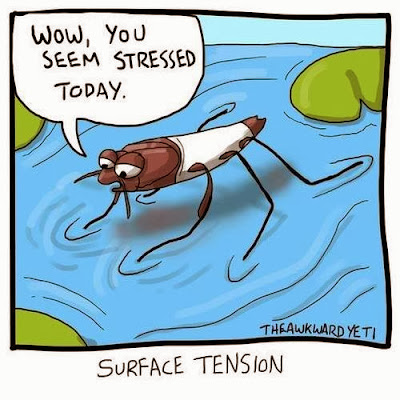