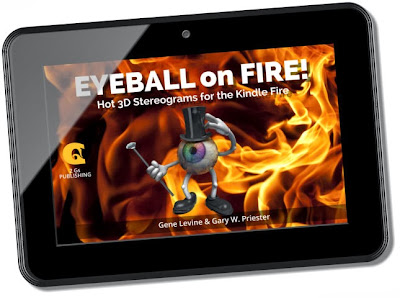 EYEBALL on FIRE!
Hot 3D Stereograms for the Kindle Fire

Abq Jew has mixed feelings about announcing this because ... Abq Jew can't really see things in 3D, having suffered from "lazy eye" as a mere child.

From the Mayo Clinic:

Lazy eye (amblyopia) is decreased vision that results from abnormal visual development in infancy and early childhood. Although lazy eye usually affects only one eye, it can affect both eyes. Lazy eye is the leading cause of decreased vision among children. Left untreated, vision loss may range from mild to severe.

With lazy eye, there may not be an obvious abnormality of the eye. Lazy eye develops when nerve pathways between the brain and the eye aren't properly stimulated. As a result, the brain favors one eye, usually due to poor vision in the other eye. The weaker eye tends to wander. Eventually, the brain may ignore the signals received from the weaker — or lazy — eye.

Doctors tried all the above to correct Abq Jew's lazy eye, with little success. The result is a sort of flat world, all surface with no depth. Abq Jew can use other visual clues to determine how far he is from the car in front of him, but he's never really sure.

And stereograms? You've got to be kidding. Stereograms (like those eye- testing machines at the MVD) are a source of hilarious frustration for Abq Jew, who, at his current level of consciousness, does not need any more of such.


Stereograms are two dimensional images that appear to be a nothing more than a random pattern. But when viewed correctly, with two more or less functioning eyes, reveal an illusion of 3D depth.

The image shown here is a hidden image stereogram that contains the words Mazel Tov! in Hebrew. When viewed as a stereogram, the golden characters appear to lift off the page (or monitor) while the blue background recedes into space. 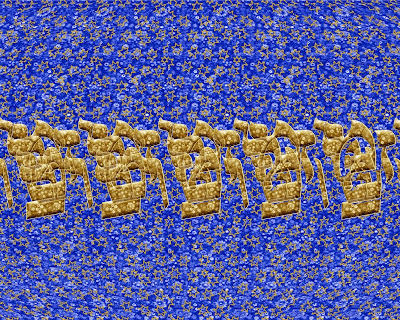 Really? Abq Jew just has to take Gary's words for it. As Gary further explains:


The trick to viewing a stereogram image is to not focus on the image itself. This is hard for some because we are accustomed to reading from a page or monitor where we focus directly on the text and images. But stereogram vision requires that we focus a little beyond the image.

This is not difficult. The best way to accomplish this is to get as close to the image as possible, and then very, very slowly, with your eyes still relaxed and blurred, begin to move away from the image. Try to maintain this blurred vision as you pull away from the image and you will begin to experience a sense of 3D space. This may require several tries but the important thing is stay relaxed and do not focus on the image.

Most people, even people who swear they can "never see these things" can. It is just a matter of relaxing your eyes and letting your brain pull the image together. When you see your first stereogram, the effect is at once amazing and magical. And once you master the technique, it gets easier with each new image.

Gary was kind enough to send this "hidden image" to Abq Jew, along with the stereogram above. The two images may be related. Don't ask Abq Jew - ask Gary! 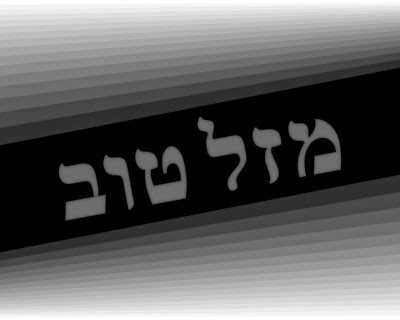 And how, Abq Jew hears you ask, did Gary Priester get involved with stereograms?


For Priester, it all started back in the mid 90s when he was intrigued with the Magic Eye stereogram books and posters. At the time, Priester was an associate editor with Publish Magazine in San Francisco.

A fellow editor had written a software review for a program that created hidden 3D stereograms. Priester contacted the author and offered to pay for a short tutorial. The author did and Priester's obsession with stereograms began.

After creating a few dozen images, Priester created a website with some of his earliest efforts. His hand coded HTML website was seen by Gene Levine, another stereogram artist, and the two began to exchange e-mails about stereograms.

Levine had just been asked by Takarajimasha Inc., a large magazine publishing firm in Tokyo to provide images for a new stereogram magazine series, The Magical Eye.

The editor asked Levine if he knew of any other stereogram artists, Levine recommended Priester and the collaboration began.

And how, Abq Jew hears you further query, can Gary Priester and Gene Levine possibly be friends and collaborators if they have never met(!)?


Priester lives in Placitas, Levine lives in Los Angeles. The two have collaborated for close to 15 years, but  have never met, and have never talked to one another on the phone!

But inasmuch as Gene and Gary are both self proclaimed hermits, and terminally grumpy persons, the collaboration has been effective without the need to chat or to do lunch.

They have different styles that complement each other. But they also have no qualms about "borrowing" a new technique from one another.

Levine's wife has often commented that she cannot tell the work of "the Two Gs" (as they are referred to by their Japanese editor) apart.

Anyway, Eyeball on Fire! is available from Abq Jew's Amazon Store. It "works" on the Kindle Fire (and any tablet that can run the Kindle reader app). Tablets are perfect for viewing stereograms because of the high resolution, back-lighted images.

The e-book contains 50 all new colorful stereograms by Gary Priester and Gene Levine, who are considered masters of the art of the 3D stereogram.

i have wondered for years if it is possible that the torah using the block script hebrew letters could contain stereograms if the right column width and height was found. do you think this is plausible?