A Song for the Right

Know Nothing, Do Less: The news today is bad all over. First, we learned of the deaths of Peter O'Toole (81) and Joan Fontaine (96). Then we learned of the American Studies Association's decision to endorse an academic boycott of Israel. 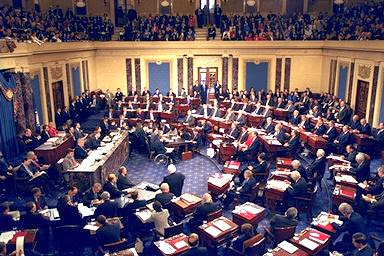 And then - as if the news wasn't bad enough already - we were reminded that this is the last week that the Senate will be in session this year. And this, coming so soon after the House left town! The New York Times reports:


Senate Prepares to Wrap Up Sluggish 2013

The Senate’s final week in session this year promises to be memorable not for legislative business like the pending budget and defense bills but for something far less inspired: the vast amount of time it spends doing nothing in particular.

Abq Jew knows this may come as a shock, so he urges you to sit down. For indeed, The Times continues:


But the lack of movement in the Senate is only half the story of a Congress that has reached record levels of inactivity. Lawmakers simply are not spending as much time in Washington for many reasons, including a distaste for the contentious atmosphere that a deeply divided government has created and the demands of a fund-raising schedule.

And the numbers prove it.

According to data analyzed by The New York Times, the House of Representatives, which ended its business for the year last week, left town with the distinction of having been at work for the fewest hours in a nonelection year since 2005, when detailed information about legislative activity became available.

By a similar measure, the Senate was near its recorded lows for days on the floor. Senators have spent 99 days casting votes this year, close to the recent low point for a nonelection year in 1991, when there were 95 voting days.

Alas, the House and the Senate will soon be among the departed, after an exemplary show of ... well, nothing in particular. Not this year. Bye now.

Still, this has been an exciting year in politics, what with the ongoing activities of Ron Paul, Rand Paul, Ayn Rand (born Alisa Zinov'yevna Rosenbaum), Paul Ryan, and ... dare we fail to mention ... Ted Cruz. (OK ... Ms Rand was not up to her usual level of activity - she died in 1982 - but people were still talking.)

Which reminds Abq Jew of one of Archie Bunker's most famous rants:

Oh, ye of few years - do you think we, as a nation, have never gone through such trying times before? Well, Abq Jew assures you - we have. Before the Do Nothings, there were the Know Nothings. And before the Tea Party, there was the John Birch Society.

In fact, there still is. A little of the Society's backstory:

The organization's overall goal, never altered in the 50-plus years of its existence, has always been to create sufficient understanding amongst the American people about both their country and its enemies, so that they could protect freedom and ensure continuation of the nation's independence.

In case you are unfamiliar with the legend, Wikipedia tells us:


John Morrison Birch (May 8, 1918 – August 25, 1945) was an American military intelligence officer and a Baptist missionary in World War II, who was killed during a confrontation with supporters of the Communist Party of China.

Politically conservative groups in the United States consider him to be a martyr and the first victim of the Cold War. The John Birch Society, an American conservative organization formed 13 years after his death, was named in his honor. His parents joined the Society as Life Members.

But the world will little note, nor long remember, what Abq Jew says here.  While it can never forget what the Chad Mitchell Trio sings here. 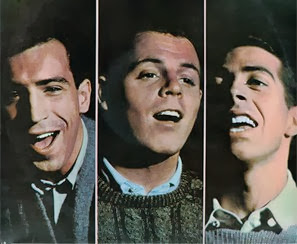 Wikipedia tells us about the Chad Mitchell Trio:


The Chad Mitchell Trio - also known as the Mitchell Trio [when John Denver was a member] - were a North American vocal group who became known during the 1960s.

They performed folk songs, some of which were traditionally passed down and some of their own compositions. Unlike many fellow folk music groups, none of the trio played instruments.

They became popular in some quarters, and were particularly notable for performing satirical songs that criticized current events during the time of the cold war, the civil rights movement, and the Vietnam War, in a less subtle way than the typical folk music and singer-songwriter musicians of their time.

And here is, from the Trio's album At the Bitter End - The John Birch Society!

The delightfully biting lyrics were written by Michael Brown (who also wrote the lyrics to another Trio hit, Lizzie Borden).

And the banjo playing? Abq Jew suspects it may be Paul Prestopino, who is known to have played for the Trio on other albums - and who also played for Peter, Paul and Mary, Tom Paxton, Judy Collins, and John Denver.

Now, did those marvelous lyrics just whiz by too fast for you? Have no fear - Abq Jew has you covered! Here are Michael Brown's lyrics, with hyperlinks to all (well, most) of the historical references that he managed to plug into the song.

Oh, we're meetin' at the courthouse at eight o'clock tonight
You just walk in the door and take the first turn to the right
Be careful when you get there, we hate to be bereft
But we're taking down the names of everybody turning left

Well you've heard about the agents that we've already named
Well MPA has agents that are flauntedly unashamed
We're after Rosie Clooney, we've gotten Pinky Lee
And the day we get Red Skelton won't that be a victory

We'll teach you how to spot 'em in the cities or the sticks
For even Jasper Junction is just full of Bolsheviks
The CIA's subversive and so's the FCC
There's no one left but thee and we, and we're not sure of thee

Do you want Justice Warren for your Commissar?
Do you want Mrs. Krushchev in there with the DAR?
You cannot trust your neighbor or even next of kin
If mommie is a commie then you gotta turn her in