Lena From Queensa: Mr & Mrs Abq Jew have returned from the wilds of post-Sandy New Jersey, where, after two years plus of ... discussion ... they finally convinced Great Grandmama (of Lena Rose; see Welcome, Lena Rose!) to give up the solitude of the Garden State and join them here in the Land of Enchantment. 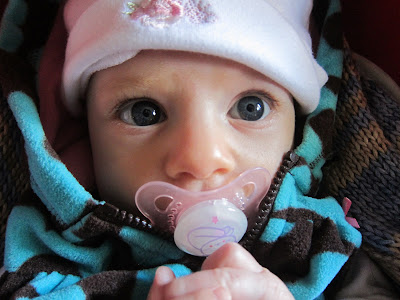 Speaking of Lena Rose: Here is a picture from November, but which Mr & Mrs Abq Jew could have taken during their visit to post-Sandy Forest Hills. Is she cute, or what?

Mr & Mrs Abq Jew and the machetonim had the pleasure of babysitting Lena Rose last Saturday night. For a few hours, our uniquely intelligent, remarkably beautiful, and incredibly talented almost-four-month-old granddaughter had the full and undivided attention of all four of her love-smitten grandparents. What an honor! 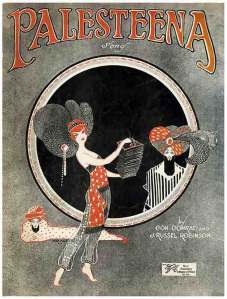 And speaking of Palestine: OK, we weren't. But Abq Jew covered Palestine (see 5 Years, 65 Years, 19 Years). So while we're talking about Lena and Palestine:

The popular 1920s song Lena from Palesteena was written by Con Conrad and J Russel Robinson, and first recorded with words by Eddie Cantor in 1920.

That was a great old version by Frank Crumit, of which Savta Dotty says:


"Lena from Palesteena", written by J. Russel Robinson and Con Conrad. It was originally recorded by Eddie Cantor in 1920 (released by Emerson Records, record number Emerson 10292).

My family had the Eddie Cantor recording and I remember the tune (I think this was the first thing I ever heard about the Middle East).

The complete lyrics (not all sung here) are:


In the Bronx of New York City
Lived a girl, she's not so pretty
Lena is her name.
Such a clever girl is Lena
How she played her concertina
Really, it's a shame.
She's such a good musician
She got a swell position
To go across the sea and entertain.
And so they shipped poor Lena
Way out to Palesteena
From what I hear now, she don't look the same.

They say that Lena is the Queen o' Palesteena
Just because she plays the concertina.
She only knows one song,
She plays it all day long
Sometimes she plays it wrong,
But how they love it
Want more of it
I heard her play once or twice.
Oh! Murder! Still, it was nice.
All the girls, they dress like Lena
Some wear oatmeal, some Farina
Down old Palesteena way.

Lena's girlfriend Arabella
Let her meet an Arab fella
That she thought was grand.
On a camel's back a-swaying
You could hear Miss Lena playing
Over the desert sand.
She didn't play such new ones
All she knew were blue ones
And Yusef sat and listened by his tent
And as he tried to kiss her
She heard that Arab whisper,
"Oh Lena, please play your instrument!"

They say that Lena is the Queen o' Palesteena
'Cause she shakes a wicked concertina.
She plays it day and night
She plays with all her might
She never gets it right,
You think it's funny,
Gets her money.
There's nothin' sounds like it should.
So rotten, it's really good.
While the Arabs danced so gaily
She would practice aily-aily
Down old Palesteena way.

Lena, she's the Queen o' Palesteena
Goodness, how they love her concertina.
Each movement of her wrist
Just makes them shake and twist
They simply can't resist
How they love it
Want more of it.
When she squeeks
That squeeze-box stuff
All those sheiks
Just can't get enough.
She got fat as he got Lena
Pushing on her concertina
Down old Palesteena way.


Late in 1920, Eddie Cantor introduced "Lena from Palesteena" in George LeMaire's "Broadway Brevities of 1920." But the character of Lena Strauss in the song was borrowed by its composers from a 1910 Ziegfeld Follies song by Ballard McDonald and Harry Carroll, "Nix on the Glow-Worm, Lena." The 1910 song introduced Lena, who played "The Glow-Worm" on her concertina until the other boarders in her boarding house couldn't take it. And, it seems, Lena's comic character was still remembered in 1920. The 1910 song was introduced in the Ziegfeld production by Grace Tyson, and was recorded in 1910 for Victor by Ada Jones, and also by Billy Murray.

What, Abq Jew hears you ask, could be better than "Lena From Palesteena" and "Nix on the Glow-Worm, Lena?"  How about ... 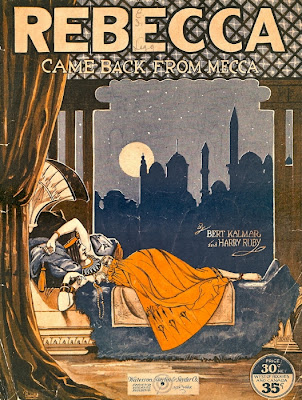