What's Borscht Got To Do With It? "(Ghost) Riders in the Sky: A Cowboy Legend" is a country and cowboy-style song. It was written on June 5, 1948 by Stan Jones. And yes - it's another great tune for Adon Olam! 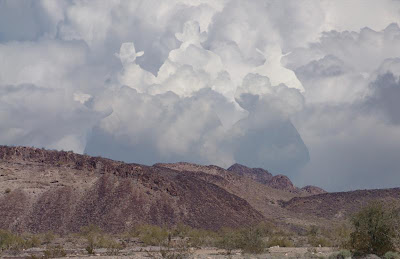 The song tells a folk tale of a cowboy who has a vision of red-eyed, steel-hooved cattle thundering across the sky, being chased by the spirits of damned cowboys. One warns him that if he does not change his ways, he will be doomed to join them, forever "trying to catch the Devil's herd across these endless skies". Jones said that he had been told the story when he was 12 years old by an old cowboy friend. The story resembles the northern European mythic Wild Hunt.

The song was first recorded by Burl Ives in 1949. After that - about a zillion (Abq Jew's estimate) artists have performed and / or recorded the song.

But more importantly (Abq Jew's viewpoint) - about a zillion parodies of the song have been performed and / or recorded.

One recent parody is performed here by Leroy Troy: "Ghost Chickens In The Sky".

Now, everyone knows that chickens and banjos are Jewish. So, even though Leroy Troy probably isn't (and Abq Jew isn't sure about Marty Stuart) - that was a Jewish song!

Many yuppies are / were Jewish, and singer / songwriter Tom Paxton wrote a parody for them, too: "Yuppies In The Sky".  The words start out with:

As I went out one evenin' down Columbus Avenue
All the sushi bars were shuttered, dark cantinas too
And I stood there in the darkness,as an empty cab rolled by
Then all at once I heard the sound of yuppies in the sky

Then the herd came down Columbus, for as far as I could see
All the men were wearing Polo, and the women wore Esprit
Each yuppie had a walk-man and as each one passed me by
I saw their sad expressions and I heard their mournful cry


Condos for sale! Condos to buy! Yuppies in the sky!

Programming Note:
AMP Concerts announces that
Tom Paxton will be performing at
the South Broadway Cultural Center
on January 13!

But Abq Jew still hasn't answered the question he asked at the very beginning:


What's Borscht Got To Do With It?

First of all, from Wikipedia: 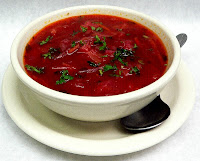 Borscht (also borsch, bortsch, borstch, borsh, borshch; Ukrainian: борщ) is a soup of Ukrainian origin that is popular in many Eastern and Central European countries. In most of these countries, it is made with beetroot as the main ingredient, giving it a deep reddish-purple color. In some countries, tomato is used as the main ingredient, while beetroot acts as a secondary ingredient. Other, non-beet varieties also exist, such as the tomato paste-based orange borscht and green borscht (sorrel soup).

But you older members of the Abq Jew gang know where he's going with this. The Greatest Parody of "Ghost Riders In The Sky" Ever was by Mickey Katz, the father of actor Joel Grey and grandfather of actress Jennifer Grey.


Mickey Katz was born Meyer Myron Katz on Sawtell Court in Cleveland, Ohio, the son of Johanna (née Herzberg) and Menachem Katz. Although originally one of five children, Mickey lost an older sister to diphtheria when he was about four years old. Mickey's father provided for the family by working as a tailor, but money was always tight in the Katz family. As children Mickey and his siblings contributed to the family's finances by entering amateur musical contests in the neighborhood theaters and bringing the prize money home to their parents. Even after graduating high school Mickey continued to support his family with the money he earned from his music.

Out of high school Katz was hired by Phil Spitalny to go on a road tour. While waiting at the train station to leave, Katz met Grace Epstein, his future wife. He was seventeen and she was fourteen. In 1930, at the age of 20, Katz married Grace Epstein. They had two sons, Joel Grey and Ronald. Each of Katz's sons had two children. Joel fathered Jennifer Grey and Jim Grey, and Ronald fathered Randy Katz and Todd Katz. In 1977 Katz told the story of his life in a biography called Papa Play for Me.

And so, without further ado, is


Borscht Riders In The Sky


Can't Anyone Play This Song Straight?

But if you want to hear the song sung straight, here's a much better idea:


Judith "Judy" Marjorie Collins (born May 1, 1939) is an American singer and songwriter, known for her eclectic tastes in the material she records (which has included folk, show tunes, pop, rock and roll and standards), and for her social activism.

Ahhhhhhhhhhh. Abq Jew could listen to that golden voice forever. But, he hears you ask, why Judy 'Blue Eyes'? For you younger Abq Jew gang members, here is some Wikipedia history:


"Suite: Judy Blue Eyes" is a suite of short songs written by Stephen Stills and performed by Crosby, Stills and Nash (CSN). It appeared on the group's self-titled debut album in 1969 and was released as a single, hitting #21 on the Billboard Hot 100 pop singles chart. The song is ranked #426 on Rolling Stone's list of the 500 Greatest Songs of All Time.

CSN performed "Suite: Judy Blue Eyes" this song at the Woodstock and Live Aid festivals. The title may be a play on words for "Sweet Judy Blue Eyes"; also, the song may be considered a suite in the classical music sense (i.e., an ordered set of musical pieces, usually four in number).

The title "Suite: Judy Blue Eyes" refers to Stephen Stills' former girlfriend, singer/songwriter Judy Collins, and the lyrics to most of the suite's sections consist of his thoughts about her and their imminent breakup. Collins is known for her piercing blue eyes, which are referenced in the title. During a July 15, 2007 interview for the National Public Radio program Just Roll Tape, Stills revealed that Collins was present in the studio when the demo tapes were recorded. Collins had advised Stills "not to stay [at the studio] all night." Stills later commented that their "the breakup was imminent...we were both too large for one house." Stills said that he liked parts of this demo version of "Suite: Judy Blue Eyes" better than the released version.

CSN actually formed in order to record "Suite: Judy Blue Eyes". Stills and David Crosby had discussed the idea of creating a three-man vocal group, but were unable to find a suitable third partner. Among those seriously considered was John Sebastian of The Lovin' Spoonful. At an informal gathering one evening, Stills and Crosby performed a two-voice version of a new song entitled "You Don't Have to Cry". Graham Nash, who was present at the gathering, asked the duo to sing the song again repeatedly. After several performances, Nash began singing the missing high vocal harmony, resulting in him joining the group shortly thereafter.