A Train Near Magdeburg

(AP) HUDSON FALLS, NY: A World War II veteran from New York whose account of liberating Holocaust victims from a Nazi train led to reunions with the survivors 60 years later has died.

You may have missed this story, which appeared online today at KOB.com. KOB picked up the story from Associated Press. But the headline caught Abq Jew's eye, and he decided to follow it up. 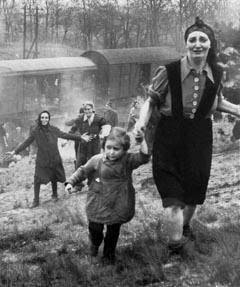 A World War II veteran from New York whose account of liberating Holocaust victims from a Nazi train led to reunions with the survivors 60 years later has died.

Matthew Rozell, a friend of Carrol Walsh, tells The Associated Press that Walsh died Monday at his home in Sarasota, Fla. The retired New York judge was 91. A cause of death wasn’t immediately available.

Walsh and other American soldiers liberated 2,500 Jewish concentration camp prisoners from a Nazi train at the end of World War II.

His story was posted on a website Rozell created for the history class he teaches at Hudson Falls High School in upstate New York.

That led to a series of reunions involving veterans and train survivors in New York, South Carolina and Tennessee.

(Copyright 2012 by The Associated Press. All Rights Reserved.)

Here is the website that Matthew Rozell created for his Hudson Falls High School history class. The story begins with this excerpt from Wayne Robinson, Move out Verify: the Combat Story of the 743rd Tank Battalion  (Germany, no publisher, 1945):


There was another sidelight to the death of fascism in Europe.  Only a few of the battalion saw it.  Those who did will never forget it.

A few miles northwest of Magdeburg there was a railroad siding in wooded ravine not far from the Elbe River. Major Clarence Benjamin in a jeep was leading a small task force of two light tanks from Dog Company on a routine job of patrolling. The unit came upon some 200 shabby looking civilians by the side of the road.  There was something immediately apparent about each one of these people, men and women, which arrested the attention. Each one of them was skeleton thin with starvation, a sickness in their faces and the way in which they stood-and there was something else.  At the sight of Americans they began laughing in joy - if it could be called laughing.  It was an outpouring of pure, near-hysterical relief.

The tankers soon found out why.  The reason was found at the railroad siding.

There they came upon a long string of grimy, ancient boxcars standing silent on the tracks.  In the banks by the tracks, as if to get some pitiful comfort from the thin April sun, a multitude of people of all shades of misery spread themselves in a sorry, despairing tableaux  [sic]. As the American uniforms were sighted, a great stir went through this strange camp. Many rushed toward the Major's jeep and the two light tanks.

Bit by bit, as the Major found some who spoke English, the story came out.

This had been - and was - a horror train.  In these freight cars had been shipped 2500 people, jam-packed in like sardines, and they were people that had two things in common, one with the other:  They were prisoners of the German State and they were Jews.

Included on the website is the witness testimony relayed by Sgt George Gross to Matthew Rozell in March 2002.  About the picture, Sgt Gross says:


Major [Clarence L] Benjamin took a powerful picture just as a few of the people became aware that they had been rescued.  It shows people in the background still lying about, trying to soak up a bit of energy from the sun, while in the foreground a woman has her arms flung wide and a great look of surprise and joy on her face as she rushes toward us.

I spent part of the afternoon listening to the story of Gina Rappaport, who had served so well as interpreter.  She was in the Warsaw ghetto for several years as the Nazis gradually emptied the ghetto to fill the death camps, until her turn finally came.  She was taken to Bergen-Belsen, where the horrible conditions she described matched those official accounts I later heard.  She and some 2500 others, Jews from all over Europe, Finnish prisoners of war, and others who had earned the enmity of Nazidom, were forced onto the train and taken on a back-and-forth journey across Germany, as their torturers tried to get them to a camp where they could be eliminated before Russians on one side or Americans on the other caught up with them. Since the prisoners had little food, many died on the purposeless journey, and they had felt no cause for hope when they were shunted into this little unimportant valley siding.  Gina told her story well, but I have never been able to write it.  I received a letter from her months later, when I was home in San Diego.   I answered it but did not hear from her again.  Her brief letter came from Paris, and she had great hopes for the future.  I trust her dreams were realized.

There is more - much more - on Matthew Rozell's website, including links to Teaching History Matters and Holocaust Survivors, Liberators Reunited, an ABC News report.