With Boston Charlie:  This has absolutely nothing to do with Albuquerque and little to do with Yiddishkeit.  What it has to do with is honoring one's parents. 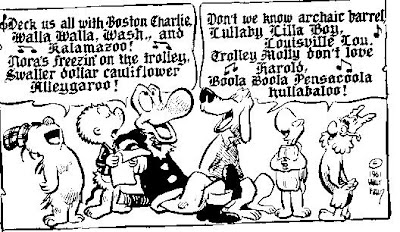 In this, Abq Jew's season of yahrzeits, he honors (once again) his father, Richard Yellin, who loved Walt Kelly's Pogo cartoon strip; and his mother, Roselyn Yellin, who loved his father.
Abq Jew also sees it as his responsibility to pass down the tradition.  There are whole generations of American Jews who have never heard this song.  Enjoy!

The complete lyrics are:

Deck us all with Boston Charlie,
Walla Walla, Wash., an' Kalamazoo!
Nora's freezin' on the trolley,
Swaller dollar cauliflower alley-garoo!

Some background, courtesy of Wikipedia:

Pogo is the title and central character of a long-running daily American comic strip, created by cartoonist Walt Kelly (1913–1973) and distributed by the Post-Hall Syndicate. Set in the Okefenokee Swamp of the southeastern United States, the strip often engages in social and political satire through the adventures of its anthropomorphic funny animal characters.

Pogo combined both sophisticated wit and slapstick physical comedy in a heady mix of allegory, Irish poetry, literary whimsy, puns and wordplay, lushly detailed artwork and broad burlesque humor. The same series of strips can be enjoyed on different levels both by young children and savvy adults. The strip earned Kelly a Reuben Award in 1951. 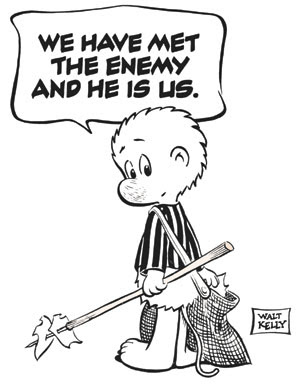 Probably the most famous Pogo quotation is "We have met the enemy and he is us." Perhaps more than any other words written by Kelly, it perfectly sums up his attitude towards the foibles of mankind and the nature of the human condition.