Of Real Estate: According to the polling website FiveThirtyEight, a person in the United States is expected to move 11.4 times in his lifetime. Abq Jew doesn't know who that person is. But - so far - Abq Jew has moved 12 times.

Unless the Messiah comes ... pretty soon.

We are now in the Biblical month of December, where Torah aficionados rejoice at all the stories about our man Joseph's dreams. Joseph dreams of cattle and wheat, which is not to mention bread and wine. And maybe - according to the musical, anyway - he dreams of the Land of Israel. 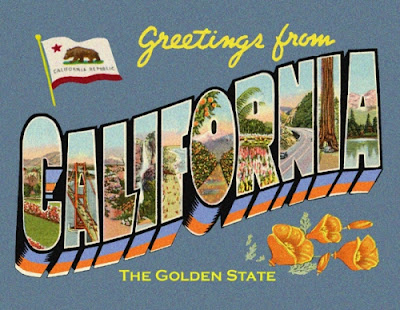 Too bad. Just a little bit farther, and he (and Moses, of course; plus all the Children of Israel) could have done some California Dreamin'. Abq Jew's parents, of blessed memory, dreamed about both. 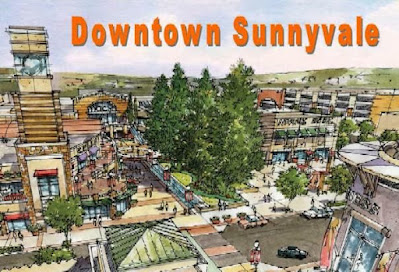 And, in 1963, wound up, with pre-Bar Mitzvah Abq Jew, in ... well, not beautiful downtown Sunnyvale. But the beautiful edge of Sunnyvale (Santa Clara was just over our back fence), in a brand new tract housing development. 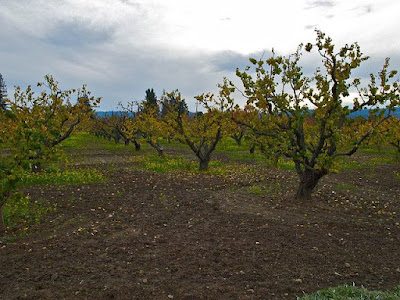 That replaced old, old orchards.
And that was a long drive (even in those days) from the wealthier, established Jewish strongholds of Palo Alto (to the north) and San Jose (to the south).

As it turns out, Abq Jew's ancestral home in Sunnyvale, California, was just sold - for the first time since Abq Jew's father sold it in 1997, a few years after Abq Jew's mother left this world. And on the 14th civil yahrzeit of Abq Jew's father's passing. 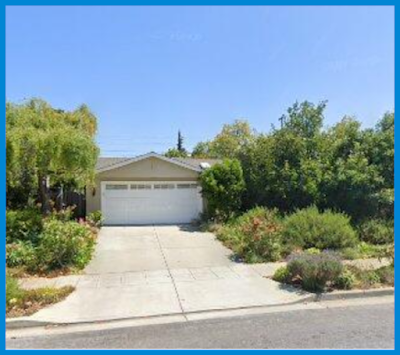 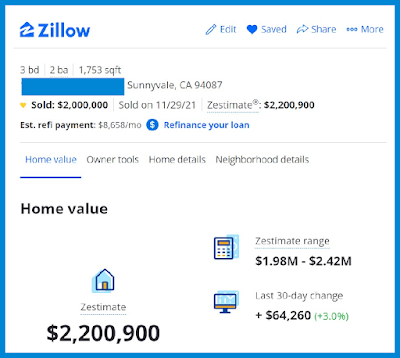 Yes, indeed. Abq Jew grew up (as much as anyone in California can) in a 2 million dollar home. Of course, Abq Jew's parents bought it for somewhat less - perhaps as much as $24,000. Perhaps.

And - what Abq Jew always finds so perplexing. Which is not to say unnerving.

The house is nothing special.

It's relatively small - 1,753 square feet. Yes, it has heating of some type - but no A/C. Not even a swamp cooler. And no basement - just a crawl space. And that's after the now-previous owners upgraded the property (turned the garage around to face the street, not sideways) according to California's weird tax laws.

Eighty-three (83) is the number of times the house appreciated in value in the 58 years between 1963, when Abq Jew's parents bought the house, and now. Or maybe it's eighty-two (82) times. Abq Jew is not really sure of how the math works.

That's an annual appreciation rate of 8%. And yes, Abq Jew is sure - he looked it up. Nationally, annual house appreciation rates are typically around 3.7%. Which proves the oft-stated point that the three things that matter most in real estate are: 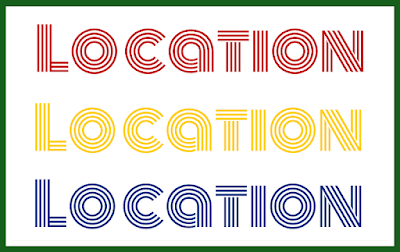 Which brings us to beautiful, uptown Goshen. As in the Bel Air of Egypt (not the village in New York. Or Indiana. Or wherever.) 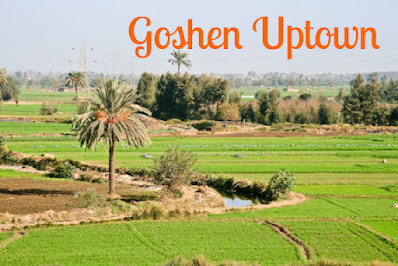 And, Abq Jew must tell you, to the joke hidden carefully in Vayigash, this week's Torah portion. Please allow Abq Jew to paraphrase the relevant verses of Chapters 46 and 47 of Genesis.

Joseph tells his mishpocha: When you go visit Pharaoh, he's going to ask you,"What do you guys do for a living?" You gotta tell him,

"We're cattlemen, and always have been."

"Xnay on the sheepnay! Egyptians don't like shepherds. If they find out you're really shepherds, they won't let you live in Bel Air Goshen."

So what happens? The brothers go visit Pharaoh, and sure enough, Pharaoh asks them, "So what do you guys do for a living?"

And sure enough, the brothers answer, in loud unison,

"We're shepherds, and always have been.
How do we get to Bel Air Goshen?"

What is Pharaoh's response? Pharaoh says unto Joseph, 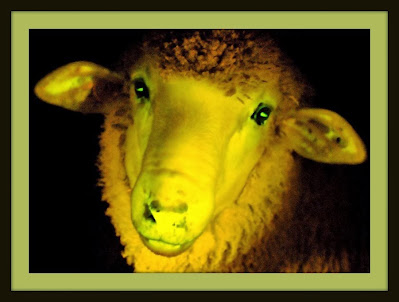 And speaking of sheep and cattle (we were, weren't we?), surely you are now aware that Sheep Wars (or Sheep and Cattle Wars) have been fought since there were sheep. Or cattle. Which goes back to Day 6 of Creation.

If you're thinking that no, that was Day 5 - well, you're wrong. The Bible tells us that Day 5 was devoted to fish and birds. You know, the evolutionary ancestors of the land creatures that God created on Day 6. 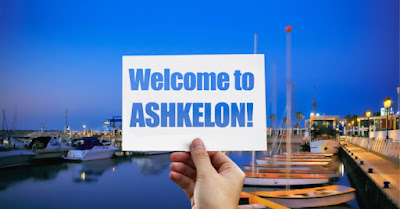 And finally, as long as we're talking about Abq Jew's parents, of blessed memory, and (lehavdil) property values and real estate - let's talk about our 1970-72 ancestral flat on Simtat HaSneh in the truly beautiful city of Ashkelon.
The JTA's Linda Gradstein just published:

A major Israeli city is just 9 miles from Gaza. Some Americans are choosing to move there anyway.
ASHKELON, Israel (JTA) — When people ask Nechama Greenfield why she and her husband chose to move just nine miles from Gaza in June, less than a month after Israel’s latest conflict with Hamas, she usually jokes that they were looking for a little excitement.
But the potential for dark humor isn’t what drew her to Ashkelon, a burgeoning Israeli city that was bombarded with hundreds of rockets from the coastal strip earlier this year, killing two people. Greenfield, a retired physiotherapist with two sons in Israel, says her family appreciates Ashkelon’s communal feel. And she isn’t fazed by the prospect of violence, which poses a risk of some kind to almost every part of the country.
That attitude is common among Ashkelon’s English-speaking immigrants, whose numbers appear to be slowly growing despite the violence. When Rabbi Matt Futterman, who used to lead Ashkelon’s Conservative synagogue, arrived in 1986, he estimated that the city had only a few dozen English-speaking immigrants, referred to in Israel collectively as “Anglos.” Thirty-five years later, that number has risen to around 500.
Ashkelon still isn’t a main draw for the thousands of Americans who move to Israel each year. Just 75 Americans have moved from the U.S. to Ashkelon since 2017, according to statistics from Nefesh B’Nefesh, a nonprofit that manages American immigration to Israel.

And a bit later:

To the Anglos living in Ashkelon, the intimacy of the city’s English-speaking community is part of its appeal. After serving at the Conservative synagogue’s pulpit, Futterman and his wife decided to move back to the U.S. to care for aging parents. But when it came time to retire, they returned to Ashkelon.

The city is small and gorgeous, and you can get from one end to the other with no traffic. There are good schools and good restaurants. A lot of English speakers are social workers, psychologists and teachers.

And how about real estate and property values?

Ashkelon’s overall population has exploded in recent years. When the Futtermans came in 1986, there were about 50,000 people living here. Today the population has tripled to nearly 150,000, making it Israel’s twelfth-largest city.

The population boom came in part due to the launch of a direct, hourlong train line between Ashkelon and Tel Aviv in 2013, which made the city more accessible to those who work in Israel’s economic capital but want less expensive housing.

A three-bedroom apartment in Ashkelon costs less than half of what it would in Tel Aviv or Jerusalem.

But, to be fair - that's not saying much. In one building, two years ago four-bedroom apartments in Ashkelon were going for about $420,000. Today they have jumped to $750,000. That's an annual appreciation rate of about 33%. 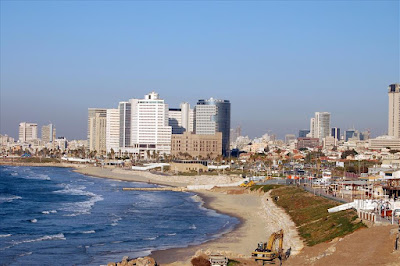 How Tel Aviv Became the Most Expensive City on Earth
Tel Aviv was not planned to be the heart of a metropolis, numbering almost five million people, from Netanya to Gedera. Tel Aviv itself is actually a small city, with only 400,000 inhabitants, whose land reserves are running out.

So it is no wonder that a three-room apartment in Tel Aviv is rented out for 8,000 shekels, [about $2,500], and in Berlin, a similar apartment will be rented out for 600 euros [about $680]—and rent cannot be hiked up beyond a limited rate stipulated by law, while no such law exists in Israel. 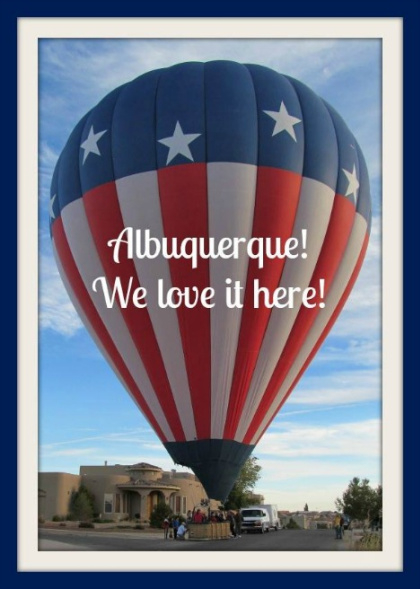