At Home in Portsmouth:  It is with continued (see Leaving Long Island) joy and excitement that Mr & Mrs Abq Jew report that their son Dov the Film Editor; their daughter (in-law) Jessica the Surgeon; their grandchildren Vera and Chuck; and their granddog Dave - 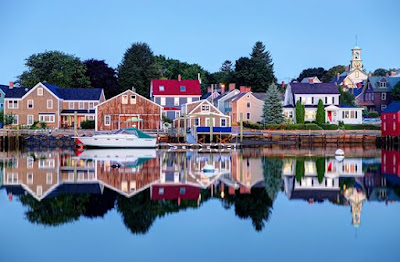 have safely arrived at their new home in Portsmouth. New Hampshire, that is.

The Nine Days - the first days of the Hebrew month of Menachem Av - begin tonight. This coming Shabbat will be Shabbat Chazon, and beginning on Wednesday next week we will observe the Fast of Tisha b'Av.

So Abq Jew (who is most definitely not a rabbi) this year favors a more liberal attitude. Perhaps next year the Nine Days will only last nine days.

English multi-instrumentalist and composer Mike Oldfield in 1976 recorded a delightful rendition of Portsmouth, an English folk dance tune. Released as a single, it is Oldfield's highest charting single in the United Kingdom, where it reached number three.

However, as you may have guessed, the song, the landscapes, and the cityscapes are all for Portsmouth. Old Hampshire, that is.

Portsmouth is an English port city primarily built on Portsea Island in the county of Hampshire.

The United Kingdom's only island city, it is 70 miles south-west of London and 19 miles south-east of Southampton. Portsmouth's population was 205,100 in the 2011 UK Census.

The city is part of the South Hampshire metropolitan area, which also includes the city of Southampton and the towns of Gosport, Fareham, Waterlooville, Havant and Eastleigh.

Portsmouth's [also known as Pompey] history can be traced back to Roman Britain.

Ahem. So let's take a first look at Portsmouth, New Hampshire - by taking this Walking Tour.


American Indians of the Abenaki and other Algonquian languages-speaking nations, and their predecessors, inhabited the territory of coastal New Hampshire for thousands of years before European contact.

The first known European to explore and write about the area was Martin Pring in 1603.

The Piscataqua River is a tidal estuary with a swift current, but forms a good natural harbor. The west bank of the harbor was settled by English colonists in 1630 and named Strawbery Banke, after the many wild strawberries growing there.

Strategically located for trade between upstream industries and mercantile interests abroad, the port prospered. Fishing, lumber and shipbuilding were principal businesses of the region.

Enslaved Africans were imported as laborers as early as 1645 and were integral to building the city's prosperity. Portsmouth was part of the Triangle Trade, which made significant profits from slavery.

At the town's incorporation in 1653, it was named Portsmouth in honor of the colony's founder, John Mason. He had been captain of the port of Portsmouth, England, in the county of Hampshire, after which New Hampshire is named.

As with much of (especially, but not exclusively) early American history, this is probably more than you were ever taught and more than you wanted to know.

Travel Channel host Samantha Brown offers her own tour of her hometown Portsmouth. New Hampshire, that is.

Walking and talking. All of which she quite obviously loves.


When Queen Anne's War ended in 1712, Governor Joseph Dudley selected the town to host negotiations for the 1713 Treaty of Portsmouth, which temporarily ended hostilities between the Abenaki Indians and English settlements of the Province of Massachusetts Bay and New Hampshire.

In 1774, in the lead-up to the Revolution, Paul Revere rode to Portsmouth warning that the British were coming, with warships to subdue the port.

In 1779, 19 slaves from Portsmouth wrote a petition to the state legislature and asked that it abolish slavery, in recognition of their war contributions and in keeping with the principles of the Revolution.

Their petition was not answered, but New Hampshire later ended slavery.

Old New Hampshire's words were written by Dr. John F. Holmes, and the music was composed by Maurice Hoffmann in 1926.

Old New Hampshire was chosen to be the "official" state song first in 1949, then again in November 1977, by the State Song Selection Board.

What beautiful words! What thrilling music!
Nice banjo-picking, too!

Fans have compared Don Watson to John Denver and Dan Fogelberg, but he has a sound all his own. With a straightforward, down home feel he has an entire CD full of songs that extols the virtues of the Granite State.

What beautiful landscapes! What moving words!