The L Train and The Jews

A Rising Tide Floods All Houses: Abq Jew loves The New Yorker. Always has. Since he was a kid, just looking at the cartoons in his psychiatrists' offices.

Yes, every now and then David Remnick & Co turn out (what Abq Jew considers) a dud issue. But - 'way more often than not - there's a few articles (yes! they publish articles!) and several cartoons that brighten and/or inform Abq Jew's week.

Abq Jew loves New York. Always has. Since he was a kid, just "growing up" in California - but realizing that real life took place in The Big Apple. So about this glorious cover, Françoise Mouly writes:


This week’s cover is by Pascal Campion, a French-American illustrator making his début in the magazine. Campion, who lives in California, has worked in the animation industry for more than fifteen years, and he recently sat down with us to talk about his art, his influences, and how he was inspired by New York.

What impressions did you bring back from your first trip to N.Y.C., a couple of years ago?

“Impressions” is a good word—I still have images imprinted in my brain from that trip.

It started out fairly mellow, in White Plains, as I was there for business. I took the train into the city and felt like a kid on his first date. As we got closer and closer, my heart kept beating faster and faster. I remember seeing the first buildings on the outskirts, and being surprised that they looked so much like what I had pictured, though maybe a little bigger. And there were so many people!

I got off at Grand Central Station, and then it was just one huge moment after another: the size of the buildings, the avenues, the parks, the lights in between buildings. I walked up and down Manhattan that day, walked until the sun came down. The city at night was even better. I was so impressed by it that I made a series of images right when I got home.


About halfway into this issue, there's Shouts & Murmurs - Humor, Satire, and Funny Observations. This week's, Idioms Updated for Climate Change, is by Ginny Hogan. Which includes:
Good for a chuckle, at least? Great, 'cause now we're gonna talk about Hell and Death and Eternal Damnation. The Bad Place. All of which appear in an article, How The Idea of Hell Has Shaped the Way We Think, by Vinson Cunningham.


For centuries, we’ve given lavish attention to the specifics of punishment, and left Heaven woefully under-sketched.

Not true! Abq Jew explored The Good Place eight years ago (!) in Torah and Talmud and Zombies and The Final Tisch; No Zombies. And (almost) two years ago in Walking to Jerusalem.


And which he doesn't want to go into again,
because Abq Jew would much rather talk about 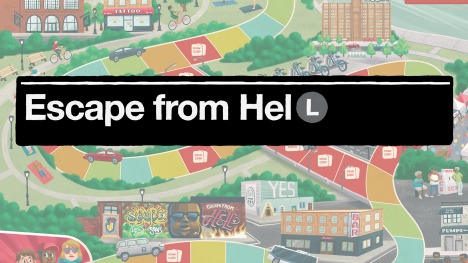 Talk of the Town and the category Long, Strange Trip. In particular, Zach Helfand's magnificently-researched and gloriously-written exploration of the New York Underground, Andrew Cuomo and the Unwinnable L-Train Game.

First, some background. Especially for non-New Yorkers. The one thing you have to remember is:

The New York City subway is actually
quite simple once you get the hang of it. 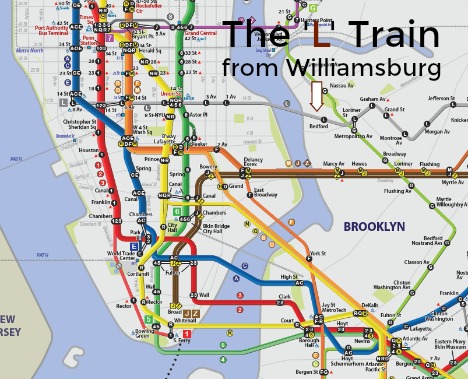 Except if you live in the Williamsburg neighborhood of Brooklyn (as many people do) and need to get to and/or from your office in Manhattan. Without the really, really direct L Train and the L Train ("Canarsie") Tunnel.

"Why would you need to do that?" Abq Jew hears you ask. Because -

In 2012, the L Train Tunnel (AKA Canarsie Tunnel) – which is 1.5 miles long and runs under the East River – was filled with corrosive salt water due to Superstorm Sandy. As a result, the 100-year-old tunnel sustained critical damage, including the Circuit Breaker House, system and power cables, and the cement benchwall that holds and protects the cables.

Crucial repair work was planned to begin in the spring of 2019, including the laborious and time-consuming process of removing – by hand – and replacing all 32,000 feet of benchwall, as well as installing 126,000 feet of power cable and 176,000 feet of communications cable inside the benchwall.

This work would require a complete shutdown of L service through the tunnel for 15 months.

Once New York Governor Cuomo and the Metropolitan Transit Authority (MTA) announced the impending shutdown, rental prices for apartments in Williamsburg shot through the ... floor. 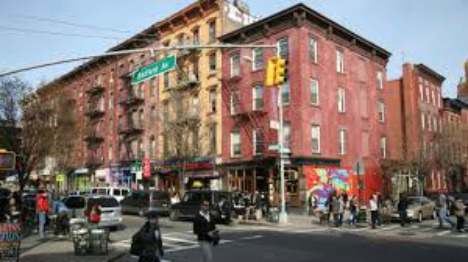 People started looking for new, Brooklyn-based jobs. Or telecommuting jobs. Or even jobs west of the Hudson River. You know - like in Jersey, or on The Coast. 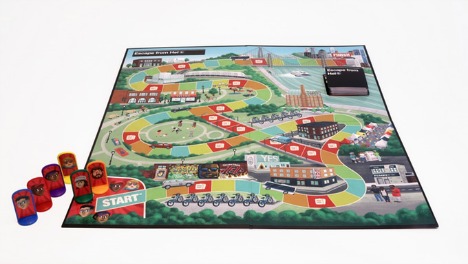 created a board game called Escape from HelL—a Candyland-like game that, according to their online description, lets players experience “the hell of trying to get to Manhattan from Williamsburg.”

First one to Manhattan wins.

A part-time guerrilla artist, Fine is best known for creating a YouTube game show, Hikea, in which contestants try to assemble IKEA furniture after taking LSD or psychedelic mushrooms. In one episode, a wild-eyed man holds up an instruction manual and says, 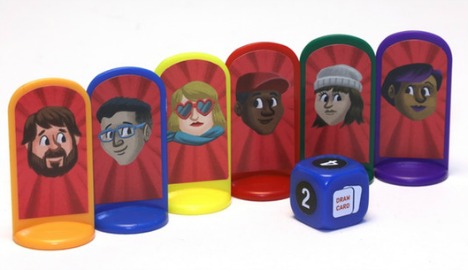 But back to Escape from HelL. Zach Helfand continues:

A prototype of the game raised more than six thousand dollars on Kickstarter.

As of last week, Fine and Arevalo were still planning to mass-produce it, having concluded that, even under Cuomo’s new plan—a shutdown-lite, with repairs on nights and weekends—getting to Manhattan will be a hellish experience.

“This was always just meant as a social commentary,” Arevalo said. The commentary?

“They’re fucking up our commutes,” Fine said. “That’s basically it.” 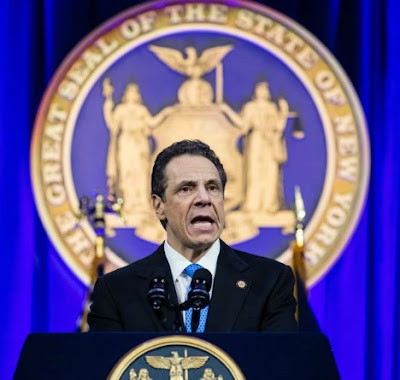 Wait! What was that middle part?


The dreaded 15-month shutdown of the L train, scheduled to begin in just a few months, won't need to happen after all, Governor Andrew Cuomo said in a surprise announcement Thursday.

Cuomo shocked residents — and seemingly some officials — when he said during a press conference that his team of experts that visited the Canarsie tunnel have come up with a new plan that will avoid a full shutdown of the subway line.

"Long story short, with this design it would not be necessary to close the L train tunnel at all, which would be a phenomenal benefit to the people of New York City," Cuomo said, adding that only some weekend or nighttime closures of one of the two tracks will be necessary.

"How," Abq Jew hears you query, "could this possibly have happened?" Could the Governor - a politician! - change his mind?


Cuomo decided just two weeks ago that he would visit the tunnel and review the plans for a possible alternative. He said at the time that he wanted to ensure he could confidently tell New Yorkers that every option was explored.

"I can't tell you how many people have approached me about the L train and the difficulties that the L train closure would trigger," Cuomo said Thursday.

"15 months sounds like a relatively short amount of time — but it's not if you're doing it one day at a time trying to get to work," he said. 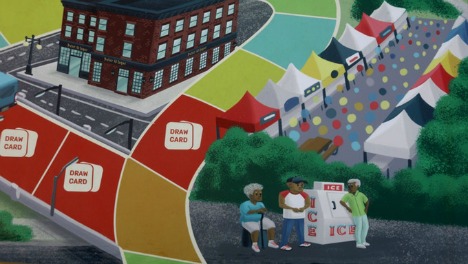 But back to Escape from HelL. Zach Helfand describes how Fine and Arevalo recruited two coffee-shop patrons for a test run of the game—Laura Craig and Wayne Patterson, Australians who moved to Williamsburg last year.


Everyone chose a token and started rolling. On the board, Craig ... avoided kombucha spills and overcrowded J-M-Z trains, and cruised past House of Yes (a night club) and McCarren Park, for an early lead. The other players stalled.

More rolls. Arevalo had to move back two spaces when he hopped into a car share near the Williamsburg strip club Pumps only to find his ex in the back seat. Fine was blocked by a Bushwick graffiti tour.

Ten minutes passed, then twenty. Time slowed to a crawl, as if measured by a subway countdown clock. The players began to feel loopy. “Whoa, I swear I just had déjà vu,” Craig said.

“I think we can end it pretty soon,” Fine said.

When the game was called, Arevalo was back in his apartment and Patterson and Fine were stopped near Peter Luger Steak House. Craig, the winner, had made it all the way to the Flyrite Tattoo parlor, near the Metropolitan Avenue station on the G train.

No one had reached Manhattan.

Fine admitted that the game is almost impossible to conquer: 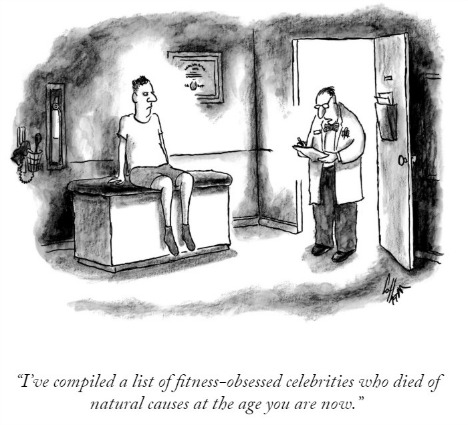 Abq Jew sincerely hopes that this blog post has a) cheered you up a bit;  b) shown you what a quality rag The New Yorker truly is, with its world-class troupe of Jewish and goyish writers. And c) reminded you about the cartoons.